1. Investigating the spread of natural vitiviruses 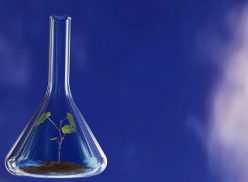 During surveys of South African wine grape vineyards, various members of the vitivirus group were detected. The vitiviruses detected were very commonly observed in mixed infections with grapevine leafroll associated virus. In instances where the vitivirus vectors are known, they share the same general vector group (mealybugs and soft scale species) as the ampeloviruses (including leafroll). For a number of years, it was believed that vitivirus spread is co-dependant on leafroll. This means that vitiviruses require leafroll for co-transmission by their common mealybug vector. The implication of a co-dependence of vitiviruses on leafroll would be that if mealybug numbers and dispersal was managed and leafroll infected plants are rogued, that vitiviruses would similarly be controlled. Recently however, evidence has been obtained of the leafroll independent transmission of vitiviruses. This implies that vitiviruses could be transmitted to grapevines without the presence of an ampelovirus. The aim of this study is to determine whether:

Root-knot nematodes (Meloidogyne javanica) feed on roots of grapevines, thereby restricting their ability to absorb water and nutrients, resulting in low vigour and much reduced yield. Although vine nurseries use soil fumigation and chemical control throughout the year, nematodes are not necessarily entirely eradicated from the soil. Currently, the Plant Improvement Scheme requires plant material to be visually free of root-knot nematode infestation. The Standard Operating Procedure for Grapevines states that hot water treatment for eradication of root-knot nematodes in rooted grapevine material has not yet been approved. Currently, nursery vines receive hot water treatment (HWT) of 50°C for 45 minutes to control various pathogens, crown gall and the phytoplasma disease, aster yellows.

The objective of this study is to test whether HWT at 50°C for 45 minutes effectively eliminates root-knot nematodes and eggs from rooted nursery material. Knowledge generated through this project will: