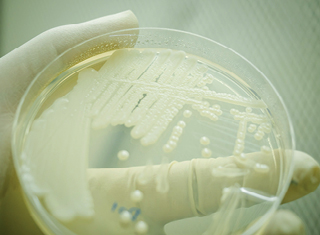 Many studies on the microbiology of winemaking rely largely on culture-based plating, which is biased towards the microbes that are able to grow on laboratory growth media.

More recent methods are culture independent – based on the ability to detect the presence of an organism’s genetic material (DNA) in the samples. Polymerase chain reaction (PCR)-based denaturing gradient gel electrophoresis (DGGE) is such a method and was employed to detect spoilage microbes and assess the yeasts and bacteria associated with the fermentation of Pinotage and Merlot grapes. Using this method, the level of detection was as low as 10 cells/mℓ for certain microbes. Results obtained for Pinotage and Merlot from a yeast perspective in both cultivars showed that the known non-Saccharomyces yeasts from genera, such as Hanseniaspora, Zygosaccharomyces, Candida and Issatechenkia played a significant role in the winemaking process even though Saccharomyces cerevisiae was the dominant yeast at the end of alcoholic fermentation. Lactobacillus species were shown to be the most dominant from a bacterial perspective, but Enterobacter sakazakii and Pantoea agglomerans were detected in the fermentations of both cultivars. These bacteria are not normally associated with wine fermentation as they do not grow well on the standard plating media used in wine microbiology. DGGE thus holds potential for profiling of microbes associated with grapes and wine.

Wine fermentation is a complex biochemical process involving interactions between yeasts, bacteria and filamentous fungi. These microbes cause desirable or undesirable organoleptic and quality characteristics of the wine. Consequently, it is important to detect the microbes associated with grapes and winemaking and also to understand their role in the fermentation process. Conventional microbiological methods can be used to identify the different microorganisms present in wine, but prove to be time-consuming and certain microbial species do not grow on the available growth media.

PCR-based DGGE is a commonly used and powerful diagnostic tool for the direct profiling of the microbial diversity present in wine without the need for cultivation. This method is based on the extraction of DNA from samples and amplification of the DNA by PCR with specific primers, followed by electrophoresis for the separation and detection of PCR-amplified products of the same length, but different base pair composition.1,2

The first part of the study by Bester et al. (2010) investigated the use of PCR-DGGE for the early detection and identification of possible spoilage microbes in wine. PCR and DGGE conditions were successfully optimised for universal primers (able to detect any microbe), bacteria-specific primers, and yeast-specific primers. PCR and DGGE detection limits were determined for Lactobacillus plantarum, Pediococcus pentosaceus, Acetobacter pasteurianus and Brettanomyces bruxellensis, respectively, when inoculated into saline solution (SSS) and white wine at 106 cfu/mℓ. PCR-DGGE detection limits ranged from 10 to 104 cfu/mℓ depending on the target microbe, with the exception of B. bruxellensis, which showed higher PCR and DGGE detection limits compared to other reference microbes. PCR-DGGE analysis was also used successfully to detect and identify L. plantarum, A. pasteurianus and B. bruxellensis at a concentration of 108 cfu/mℓ as part of mixed populations in SSS and white wine. PCR detection limits of 10 cfu/mℓ were determined for all three reference microbes in mixed populations. The detection limits were higher for mixed populations when compared to single strains.1

The second part of the study done by Cameron et al. assessed the applicability of PCR-DGGE to detect the yeasts and bacteria present in the fermentations of Pinotage and Merlot compared to conventional plating methods to determine the sensitivity of the method. Results using yeast specific primers showed that there was a high level of microbial diversity in the grape must, with non-Saccharomyces yeast driving the early stages of fermentation and S. cerevisiae beginning to dominate from day six of fermentation. Of all the non-Saccharomyces yeasts detected, H. uvarum persisted the longest in the fermentations, in both cultivars for the inoculated, as well as spontaneous fermentations.2

Analysis of the bacterial species present using bacteria specific primers yielded interesting results regarding the population dynamics during fermentations for the two cultivars. The dominant bacteria in the grape must was mainly Lactobacillus species. The major lactobacilli found at the onset of fermentation were Lactobacillus plantarum, confirming the suitability of L. plantarum as malolactic fermentation starter culture for co-inoculation. An unexpected finding was the presence of Enterobacter sakazakii and Pantoea agglomerans, bacterial species that are not frequently associated with grape must or wine. The family that these genera belong to are mainly associated with the soil, water, seeds, fruit and other plant parts, suggesting that they may enter the winemaking process indirectly from these surfaces.2

Since the publication of this study in 2013, the era of next generation sequencing has exploded, opening new avenues to assess the microbiomes of grapes and wine. Such studies have confirmed that these two genera are indeed associated with winemaking and that the wine bacterial microbiome is much more complex than previously thought – not only acetic acid bacteria and lactic acid bacteria play a role in winemaking! The big question that remains for all the newly associated bacteria and yeasts is whether they are able to survive the winemaking process (at least to some extent or for some period of time) and, if so, how they may contribute to the process.

The results obtained indicated that PCR-DGGE is an effective alternative to conventional methods as it is culture-independent, rapid and reliable. The results obtained are also important for laboratories to consider, as microbial stability tests based on the ability of yeasts and bacteria to grow in/on culture media are not optimal to assess samples from a quality perspective or to provide the necessary information for export certificates.