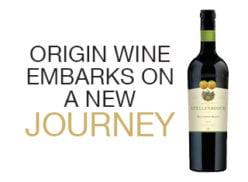 Origin Wine has never failed to impress or surprise, whether it be with service, innovation, funky packaging or off-beat ideas. A new venture into the world of fine wine brings this powerhouse closer to its roots.

The wine retail environment has been Origin Wine’s focus since its inception, and innovation and attention to detail are the two things Origin Wine founder and CEO Bernard Fontannaz and his team are known for. So it comes as no surprise that the company has invested in the Stellenbosch region with its acquisition of Devon View – now renamed Grand Domaine. What is surprising though is that Origin Wine is diversifying and embarking on a journey to establish its roots as wine grape producer.

A dedicated team, led by expert vintner Deon Joubert, has been appointed to nurture the 10.9 hectares under vines to produce a premium range of wines.

Situated at the top of Devon Hill overlooking Devon Valley all the way to the coast, Grand Domaine offers breathtaking views of the ever-changing landscape. Here winemaker Monique Fourie, her assistant Skye Nolan and a small team of cellar workers prepare to work their magic.

With its rare microclimate and terroir, Grand Domaine is ideally suited to red Bordeaux cultivars which is why only Cabernet Franc (1.87 ha), Cabernet Sauvignon (5.15 ha), Merlot (2.5 ha) and Petit Verdot (1.4 ha) are planted on the farm. All the vines are T-trellised except one small 0.37 ha Cabernet Sauvignon block which is planted in a stake/goblet manner where the in-row and in-between vine spacing is 1.4 m x 1.4 m. All the vines are drip-irrigated and although the farm has borehole water Monique says irrigation has been a challenge because of the current drought.

“The vines are all new,” she says. “We planted in 2016 and we can’t wait for the first pickings. We’re cultivating a product from the ground up, hand-reared as such.” This approach is in line with Bernard and the team’s recent new direction to produce even more fine wines.

Grand Domaine plans to become a must-experience destination. Besides the newly planted vines, there’s also a 350-tonnes cellar. A tasting room with never-ending views and deli/restaurant where guests can enjoy good food and wine in a beautiful setting are also in the pipeline.

“Grand Domaine will become a fully-fledged added dimension to the business,” Bernard says. “We want to move towards being more integrated with the grapes and soil. This is very much part of establishing ourselves as a premium producer targeting the upper tier of the market.”

The Pledge is a unique step towards the top end of the market. Sauvignon Blanc grapes are sourced from 10 different origins within the Western Cape wine region and brought to Grand Domaine where each is vinified separately until Monique chooses the final blend. “Our Pledge is to showcase a true expression of South African terroir through Sauvignon Blanc”, says Monique. “Where else will you get the opportunity to taste 10 wines, from one varietal, vinified in one cellar by one winemaker?”

Sauvignon Blanc was the cultivar of choice for The Pledge because of the extraordinary commercial opportunity it presents. “We’ve noticed a growing global interest in Sauvignon Blanc which can no longer only be viewed as simply a reaction to the well-known notion of ‘anything but Chardonnay’ or ABC,” Bernard says. “It’s rather a discovery and a growing affection for its character and fresh, zesty, crisp palate.”

While The Pledge range was launched with a South African Sauvignon Blanc, Origin plans to expand its wine production footprint globally by including the best parcels of other varietals from various regions in the world. The next offering will be a Malbec produced by Origin’s Argentinean sister company, Mendoza Vineyards. Origin has recently invested in a domaine of 75ha, Finca La Anita in Agrelo, Mendoza from where they plan to build on their current Argentinean offering.

Monique and her team at Grand Domaine make a point of visiting the various vineyards and terroirs as often as possible. “I need to understand where the grapes come from,” she says. “I learn from each harvest in order to grow as a winemaker, and always try to add some fun to my day. Otherwise work gets too serious and that has never been the Origin philosophy.”

“Our focus is to make premium wines. We would like to attract consumers that enjoy these wines in a restaurant or as part of their lifestyle. Currently the wines are not available in South Africa and are mainly only sold in the UK and Europe. But this will change in the near future. Our Recent successes with Gold and Double Gold medals at the Veritas awards have given us confidence in our new venture.”

Other than the new restaurant and tasting room, Grand Domaine’s plans include a vineyard trail where families can discover what nature has to offer on this “piece of heaven” as Bernard calls it. “It’ll be all about the destination of good wine, good food and what Mother Nature has to offer at Origin’s roots.”

Moving towards estate status for its South African offering, Origin Wine is certainly on an exciting new journey. Grand Domaine, which means great cellar in French, is on this journey to establish itself in the South African Hall of fame.

“It’s ironic,” says Monique. “We may not be the biggest in size, but I can promise you we’re big on innovation, fervour and motivation.”