Piedmont – the King of Italy

Piedmont is situated in Northwest Italy.

The meaning of Piedmont being on the foothills, describes the landscape of this leading Italian wine region very well, because it is literally a never-ending range of hills with small villages on the top of it. More than 17% of all Italian DOC and DOCG wines (which guarantees quality) are made there. It is situated in Northwest Italy with Turin, Asti, Alba and Alessandria as the most important cities. The small villages, Barolo and Barbaresco, both sides of Alba, however bestow their names to the most famous wines of Piedmont. The estates are small with an average size of 1,2 hectare. Situated in the Po Valley, Piedmont is one of the two most famous Italian wine regions and it accommodates about 30% of the Italian population. As result of the Alps in the north and the Apennines mountain range in the south, as well as the proximity of the Mediterranean Sea, it has very unique climatic conditions. Low-lying fog occurs consequently, which implies that the vineyards on the hills, where it is warmer, produce better wines. The best vineyards also occur in the south, where it is warmer and vines are usually planted on the south-facing slopes. Soils vary from calcareous stone to limestone. The winters are cold (average day temperature of 5,3°C in Turin) and dry, and the summers from end May to end September are warm (maximum day temperature of 29°C in Turin). The average annual rainfall in Turin is 845 mm. 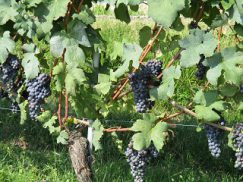 Red wine is 65% of wine production and Barbera, Nebbiolo and Dolcetto are the most important red cultivars. Although Nebbiolo is not the most planted, the famous Piedmont wines are made from it. The name of the cultivar is derived from “Nebbia”, which refers to the fog that occurs in Piedmont during the harvest. This cultivar is very terrain specific and illustrates great differences in different regions. The 35% white wines are mainly made from Moscato, Cortese and Arneis grapes.

Barolo is a very dark red wine, which is made in eleven villages in the southeast of Piedmont. Barolo, La Morra, Castiglione, Fallet, Monforte d’Alba and Serralunga d’Alba are the most important and well known of the villages. As result of the terrain differences between the villages, the wines also differ considerably. The flavour of the wines can be described as tarry, violets, leathery, chocolate, prunes, figs or liquorice, which indicates that it is not a delicate wine. It is very astringent, which requires several years of maturation before it becomes softer. Nebbiolo is genetically very tannic and this is increased by long skin fermentations. The grapes ripen late, when it is already cold and fermentation consequently occurs at lower temperatures, which delay the fermentation and cause the long extraction of hard tannins by the formed alcohol. Traditionally the tannins were softened by oak or chestnut maturation. 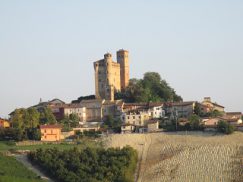 Serralunga, one of the best known Piedmont villages.

Seeing that cellars and consumers are not always willing to mature wines for a long period, modern technology was implemented since 1980 to produce wines that are drinkable at an earlier stage. Temperature control by heating, together with rackings were applied to accelerate fermentations and decrease the tannin extraction. The use of smaller French oak barrels also contributed to the earlier softening of the wines. According to legislation the Barolo designation may only be used if the wine was matured for at least three years, of which at least 18 months in barrel. If the term Riserva is used together with it the wine must be matured for at least five years in barrel and/or bottle. The alcohol concentration of it is 13 to 14% per volume and with the above-mentioned wine descriptions it is logical that rich pastas, risottos and fatty meat dishes are required to balance the wine.

Barbaresco is, like Barolo, exclusively made from Nebbiolo grapes and resembles it in most aspects. Its production volume is however about twice as much as Barolo and it is not so robust, but more elegant. It is mainly produced in the villages Barbaresco, Neive and Treiso. The basic difference between Barolo and Barbaresco is the soil of the regions. The soils of Barbaresco are more fertile, which results in less tannin of the resulting grapes. The maturation requirements of Barbaresco are consequently also one year less than that of Barolo. Although the average price of Barbaresco wines is lower than Barolo, outstanding Barbaresco wines of 2013 are sold for as much as €2 000 per bottle. Although various well-known brands exist, which sell at exceptionally high prices, Aldo Conterno, Angelo Gaja, Pio Cesare, Giacomo Conterno and Paolo Scavino are the most sought after. 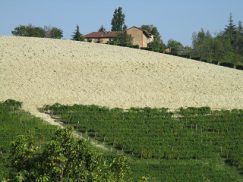 Apart from the red wines made from Nebbiolo grapes, Barbera and Dolcetto wines also exist. Both are contradictory to Barolo and Barbaresco wines. Barbera usually does not have hard tannins and does not require such a long maturation. It has a magenta colour with a high natural acid concentration. Dolcetto wines are lower in acid concentration, have less tannins and a lighter style.

Although it is not close to the same price or quality as Barolo and Barbaresco red wines, the most known Piedmont white wines are made from Moscato grapes. It can either be the low alcohol, sweetish, muscat Moscato d’Asti wines or sweetish, muscat sparkling wines. The latter was initially known as Asti Spumante, but is nowadays only called Asti.

Barolo, the home of Piedmont.

Due to the bold, robust red wines of Piedmont it can be expected that the food will also not be delicate. The traditional dishes are consequently rich and heavy. Butter, cream and eggs are used extravagantly and portions are large. The most known pasta dishes are Tagliatelle and Agnolotti (ravioli filled with veal, pumpkin or spinach). Other dishes include sausage with beans, veal tartare and roasted game, veal or lamb. White truffle, which add more flavour to the dishes, is also traditional.