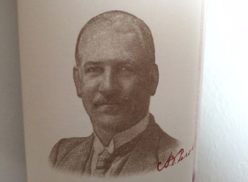 “Pinotage has a chip on a shoulder and is very often misunderstood,” says KWV chief viticulturist Marco Ventrella. This stems from a South African legacy of Pinotage that often showed unfavourable characteristics. I mean, who is really fond of smoky, leathery and herbaceous wines? But things have changed.

Pinotage has so much more to offer, specifically when its proud lineage is considered. The story of Pinotage is not unlike the 1955 American animated  musical, Lady and the Tramp. Classy Pinot Noir meets rough-and-ready Cinsaut, and the result was Pinotage. All this thanks to Abraham Perold, the man who developed Pinotage.

Given its diversity, Pinotage is also grown in Brazil, Canada, Israel, New Zealand, United States and Zimbabwe. Just as the Pinotage grape rewards the winemaker (and ultimately the consumer), the vine also holds favour with viticulturists. According to Marco, Shiraz is quite wasteful with water while Cabernet Sauvignon is very water efficient. Pinotage, while not as frugal as its Bordeaux counterpart, also tends to be more water efficient. “The Pinotage vine is a tough and willing plant,” says Marco. And isn’t this just right up the Western Cape’s water-strapped alley?

In the cellar, the Pinotage grape is very versatile, lending itself to a variety of wine styles. “Pinotage can take much more wood, seeing that it’s a very fruity varietal,” says KWV winemaker Izele van Blerk. “Also, I like experimenting in the cellar and Pinotage is well suited to a variety of styles. For instance, I did a three-part trial on Pinotage and three very different wines were made. For one of the wines I followed my winemaking textbook instructions to a T, and for another wine I did all the things with Pinotage my textbook said I wasn’t supposed to. The result was spectacular and a testimony to the varietal’s versatility – something that allowed me to show the parental influence of Pinot Noir and Cinsaut in the final wine.” To learn more about this trial, visit https://www.wineland.co.za/quest-become-whole/.

I will conclude with something Marco said at KWV’s recent Pinotage Day, “The Pinotage vine can take a lot of beating. And yet, despite all the hardships in the vineyards, it’s still so willing to give exceptional grapes. This varietal is truly a gift from God to man.”

So let’s raise our glasses to our very own Wild Child.