Grapevine trunk diseases are caused by various fungal groups. Botryosphaeria dieback is caused by species of the Botryosphaeriaceae, Petri disease by a combination of Phaeomoniella chlamydospora and Phaeoacremonium species and esca (‘beroerte’) by the aforementioned pathogens together with wood rotting Basidiomycetes. Eutypa dieback (‘tandpyn’) is caused by species of the Diatrypaceae with Eutypa lata being the most well known. Phomopsis dieback is caused by different Diaporthe species (previously known as Phomopsis).

FIGURE 1. Vineyards planted next to a) an apricot orchard in Montagu and b) an apple orchard in Villiersdorp. 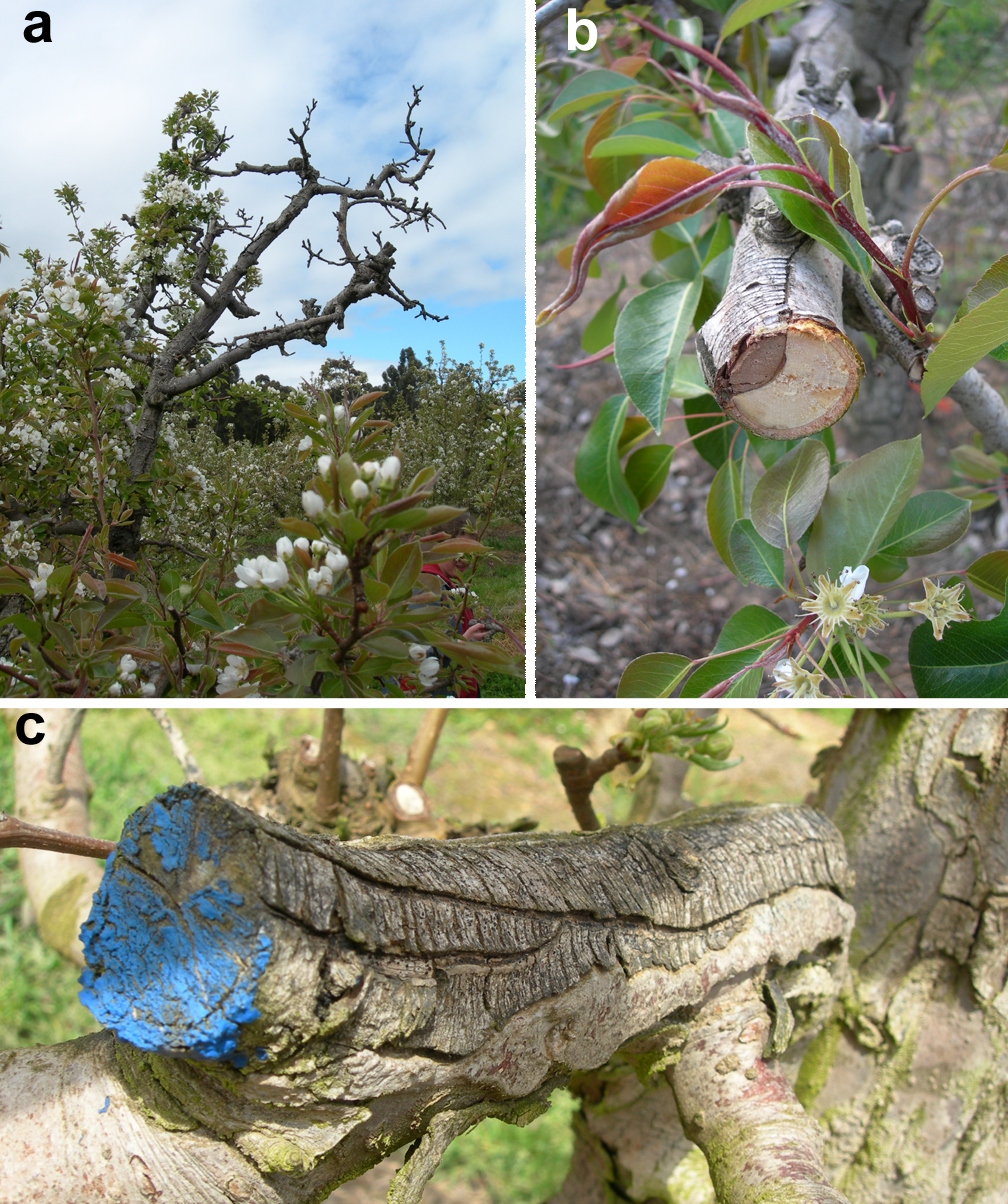 FIGURE 2. Outward symptoms observed on pome fruit trees included: a) dieback, b) a canker showing wedge-shaped dark brown internal necrosis and c) a canker that developed from a pruning wound.

Apple (cv. Granny Smith) and pear (cv. Packham’s Triumph) trees older than 15 years were sampled in 2006 and 2007 in Grabouw, Vyeboom, Villiersdorp, Wolseley and Ceres. Plum, peach, nectarine and apricot orchards in high (Stellenbosch, Paarl and Franschhoek) and low (Robertson, Bonnievale and Montagu) winter rainfall areas in the Western Cape Province and in summer rainfall areas in the Limpopo Province (Mookgopong and Modimolle) were sampled in 2004 and 2005. Isolations were made from fungi developing from surface sterilised wood pieces and from sporulating structures on the bark surface. Fungal species were identified according to cultural and morphological characters and DNA sequences. In cross-section, the symptomatic wood had either irregularly shaped or V-shaped necrotic lesions and was situated close to old pruning wounds and/or cankers, sometimes also associated with gummosis (Figure 4). In plum wood, lesions from which Phaeoacremonium species were isolated were often reddish brown in the centre and greenish towards the margin.

Multiple trunk disease pathogens were often isolated in different combinations from symptomatic tissues. A specific symptoms type could not be ascribed to any single pathogen. On stone fruit trees from many specimens (mostly peach and nectarine), especially Collophora rubra, was isolated as the only fungus. 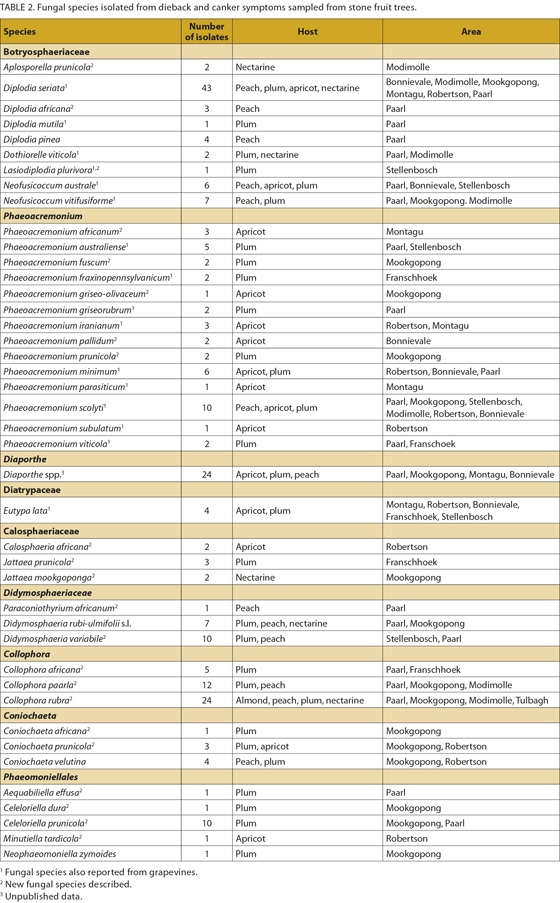 Isolates obtained from pome fruit trees that were inoculated on grapevine shoots showed that Neofusicoccum australe was the most virulent species. The Pyrenochaeta-like sp., Didymosphaeria variabile, Diplodia seriata and P. fraxinopennsylvanicum, could also be considered pathogenic, since their lesion lengths were significantly longer than the negative controls. On pear, the most virulent species were Diplodia malorum and Neofusicoccum australe. The lesion lengths of Diplodia seriata and Eutypa lata were also significantly different from the negative controls. On apple, Neofusicoccum australe and Phaeoacremonium ira­nianum formed the longest lesions and were the most virulent species. Diplodia malorum, Phaeoacremonium minimum, Neofusicoccum vitifusiforme, Diplodia seriata, Phaeoacremonium fraxinopennsylvanicum, Eutypa lata and Didymosphaeria rubi-ulmifolii s.l. could be considered pathogenic with lesion lengths significantly longer than the negative controls.

The results of the isolations confirmed that pome and stone fruit trees are hosts to known grapevine trunk pathogens of the Botryosphaeriaceae, Diatrypaceae, Diaporthe and Phaeoacremonium. Most of the species from these fungal groups have been isolated from grapevines and are known as grapevine trunk disease pathogens (Table 1 and 2). The new species in the Botryosphaeriaceae and of Phaeoacremonium need to be taken note of and could in future also be found on grapevines.

Several genera were found that are less known as trunk pathogens and have so far not been found on grapevines. For example, Didymosphaeria species were found both on pome and stone fruit trees. In the pathogenicity assay Didymosphaeria variable was shown to be also pathogenic to detached grapevine shoots. The unidentified Pyrenochaeta-like species isolated from apple trees caused significant lesions on grapevine, which might be an indication that this fungus could be a possible future grapevine trunk pathogen. Genera found only on stone fruit wood include Calosphaeria, Collophora (new genus), Coniochaeta, Jattaea and species originally described as Phaeomoniella species that have recently been transferred to other genera (Aequabiliella, Celeloriella, Minutiella and Neophaeomoniella). Unfortunately pathogenicity tests of these genera were not conducted on grapevines, but the results on detached stone fruit shoots provide an indication of their relevance as trunk pathogens. Three of the species of Collophora (Collophora africana, Collophora rubra and Collophora paarla), two species of Coniochaeta (Coniochaeta Africana and Coniochaeta prunicola), Celeloriella dura and Neophaeomoniella zymoides caused lesions that were significantly longer than the negative controls. Of these fungi, Collophora rubra was the most frequently isolated species, indicating the importance of this newly found species on stone fruit trees. As the pathogenicity assays were done on detached shoots, they provide a preliminary indication of pathogenicity. Further studies are necessary to investigate the impact of the species on tree health.

Grapevines are often grown in close proximity to stone and pome fruit trees. Fungal pathogens causing Botryosphaeria dieback, esca (‘beroerte’), Eutypa dieback (‘tandpyn’), Petri disease and Phomopsis dieback of grapevines were isolated from dieback and canker symptoms of pome and stone fruit trees. Therefore, pome and stone fruit orchards should be considered as potential inoculum sources of grapevine trunk disease pathogens. The removal and destruction of dead branches in fruit orchards is highly recommended to minimise the development of fruiting structures of trunk disease pathogens and would also prevent the spread of trunk diseases to nearby vineyards.