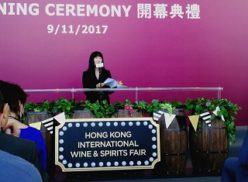 The 10th HKTDC Hong Kong International Wine & Spirits Fair opened with a record amount of entries and a brand new pavilion from Champagne.

Organised by the Hong Kong Trade Development Council (HKTDC), this year saw 1 070 exhibitors from 38 countries and regions with first time exhibitors from Malaysia, Mauritius, Romania, Serbia and the Ukraine.

“Entering its 10th anniversary, the Wine & Spirits Fair has grown to become a major event of its kind in Asia,” says Margaret Fong, executive director of the HKTDC. “During this fair, more than 70 events will be held to provide a comprehensive business exchange platform for visitors. These include a Wine Industry Conference, a gala dinner, thematic seminars, and more than 50 tastings presenting wines from Australia, Germany, France, Japan, Italy and Slovenia.”

Highlights on the first and second day included a robotic bartender demonstration at the Ice Bar, as well as The Champagne Avenue where SGV presented seven growers from four wine regions along with Champagne tastings by various producers.

The Hong Kong wine industry took off after the HKSAR Government eliminated all duty-related customs and administrative controls on wine in 2008. Wine imports have since jumped more than seven-fold, from HK$1.6 billion in 2007 to 12 billion in 2016, as the regions’ renowned wine trading and distribution centre Hong Kong serves as a gateway for global wine traders to enter Asian markets. This year’s Fair features more than 30 group pavilions representing wine-producing regions, trade organisations and government organisations from around the world.

Time to pop the cork and enjoy the Wine & Spirits Fair in Asia’s wine capital.