South African wine retailers describe the wine import trade as a tangled web of complex challenges and bureaucratic red tape. However, the gatekeepers who implement the rules and regulations say they’re necessary to protect consumers and ensure fair competition. 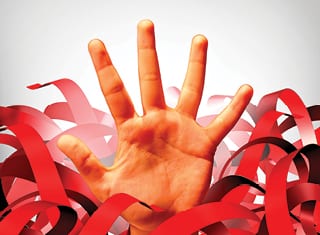 South Africa’s main priority is the export rather than import wine business. According to the most recent South African Wine Industry Information & Systems (Sawis) figures, South Africa exported a total of 448.4 million litres of wine in 2017 compared with 428.4 million litres in 2016.
The International Organisation of Vine and Wine (OIV) reported in 2017

that 58% of South Africa’s exported wine is sent in bulk, while the remaining 42% is exported as packaged wines. The biggest market for South African wine is the United Kingdom, followed by Germany and the Netherlands.

Being the seventh largest producer of wine globally and ranking 12th in terms of surface area under vines, it’s no secret South Africans love making, drinking and distributing their own wine. They’re also good at what they do as our international awards record proves. So who would even want to import wine to South Africa?
The answer is relatively simple. It’s either retailers catering for a niche group of wine lovers who’ve developed a taste for French or Spanish reds or simply an enthusiastic entrepreneur who’s spotted a gap in the market and wants to bulk import an unknown Argentinean cheapie.

Sawis says a mere 2.1 million litres wine was imported into South Africa last year – a slight increase of 48 000 litres compared with 2016. The bulk (1.007 858 litres) was made up of packaged still wine from France, Italy, Argentina and Australia, and sparkling wine (961 326 litres) from France. Packaged fortified wine from Spain and Portugal (20 253 litres) and bulk wine from France (109 382 litres) made up the balance.

The low import figures come as no surprise if you look at what imported wines cost these days. The high price of imports, especially over the past decade, is largely attributed to, but not limited to, a severely diminished rand. Monitoring prices on wine trading websites paints a clear picture: Nowhere else in the world is imported wine as expensive as in South Africa.

Shoprite Checkers’ wine retail division confirms that traditionally South Africans prefer local wines but their Wines of the World collection provides customers with the opportunity to expand their knowledge and experience of wine by introducing them to wines from the most popular wine regions around the world.
“But while imported wines are steadily growing in popularity among adventurous wine lovers, they represent a very small percentage of the Shoprite Group’s total wine sales,” says the group’s national wine buyer, Darno van Dyk.

Darno says retail prices in their Wines of the World collection range from R49.99 a bottle for the most affordable wines from Portugal and Spain to R249.99 a bottle for their most expensive import from France. An imported bottle of 2009 Château Léoville-Barton from Bordeaux bought online from Wine Cellar can cost R1 950, while on winesearcher.com the lowest average price for an imported bottle of wine is R2 295 for a 2012 Château Léoville-Barton.

Rob Gower, senior specialist buyer for wine at Woolworths, says thanks to South Africa’s trade agreement with Europe, wine retailers don’t pay any import duties on excise and VAT. “However when wine is imported from other wine-producing countries such as Australia and Argentina it attracts 25% import duty before excise and VAT, so the prices are inflated due to the extra tax.”

He says lead times, paperwork, permits and rand volatility are all contributing factors that make wine imports a challenge in this country. On the plus side, all imported wines go through the same quality checks and balances as local wines. “Consumers are well protected. South Africa is also a wine-producing country, so our wine generally comes in at a better price than imported wines of a similar quality.”

THE GATEKEEPERS
Like many other countries, South Africa has legislation in the form of the Liquor Products Act in place to control the import and sale of regulated liquor products entering the country. “The legislative requirements aim to protect consumers while ensuring fair competition for the industry,” says Marian Honing of DAFF’s Directorate of Food Safety and Quality Assurance.

South Africa has some of the most stringent import legislation in the world and all wine imports must be approved by DAFF. “Most of the wines imported into South Africa are well regulated, so we’ve had very few issues,” Marian says. Importers must however be patient when it comes to the application and review process of imported wines. “It’s a process. Our review is stringent. We ensure that the cultivar is what it says on the label and we review every aspect of the application to make sure the wine isn’t harmful or dangerous to consumers.”

THE IMPORT APPLICATION PROCESS
There’s often confusion about the legislation and import application requirements for wine and other liquor products to South Africa. Marian gives this step-by-step guide:
The first thing a potential importer must do if they want to register a product to be imported is to apply for an import certificate. The certificate has a unique import number that’s allocated to a specific product on approval of the import certificate.

DAFF’s Directorate of Food Safety and Quality Assurance requires the following:
An application for an import certificate for each product that differs in content, labelling and composition for each importer. Importers must register on wineonline.co.za before importing regulated liquor products.
A front and back label for each product.

The result of the analysis, labels and composition of the import sample is evaluated and comments are provided in the form of a written report.
Each product receives a unique import certificate number. You may not import any product save for the one the number has been allocated to on this certificate.