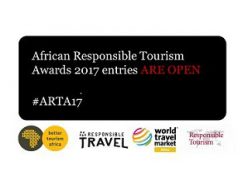 The second round of the 2017 African Responsible Tourism Awards competition has arrived, with top spots being awarded at World Travel Market (WTM) Africa in April. The awards (sponsored by WESGRO and Better Tourism Africa) recognise African organisations that show how tourism can benefit people, the environment and destinations. Longlisted organisations compete in seven categories, among them habitat and species conservation, engaging people and culture, poverty reduction and a new category in 2017 – the best responsible event. The 2017 African Responsible Tourism Awards winners will be announced at a ceremony that will be held on Thursday 20 April 2017 at the Cape Town International Convention Centre. The ceremony is part of the responsible tourism programme at WTM Africa, which takes place from 19 to 21 April 2017.