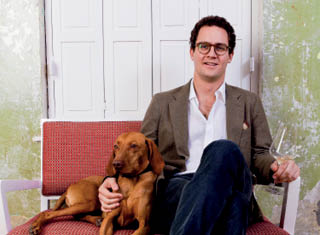 When Port2Port co-founder and managing partner Nicolò Stortiglione Pudel invests in a business his three top priorities are technology, quality and customer service. Shouldn’t the same rule of thumb apply to the entire wine industry?

Eight years ago Nicolò Stortiglione Pudel, who originally hails from Italy and Germany, decided to spread his wings and start a business somewhere off the beaten track. That place turned out to be Cape Town and he’s not looked back since. Wine was one of the major drawcards and became a key part of the business. Port2Port.wine emerged as a side project at his digital agency, Pier2Pier, and fittingly combined two of his passions: tech and wine.

Nicolò (or Nic for short) is a prime example of a modern start-up entrepreneur. Ideas abound and he’s not shy to share them. In fact, instead of keeping them to himself he engages with others to test and assess concepts and designs. “What’s an idea if it doesn’t come to fruition?” he asks. “Talking to various people is much more valuable because that’s when you learn.”

As an enthusiastic proponent of co-opetition, Nic says the South African wine industry can only benefit from closer collaboration and by shedding scepticism about what your neighbour is up to. Port2Port is a prime example of this, with competing businesses using the platform because Nic says, “it simply makes sense”.

The Port2Port concept was developed on the back of several customised online wine stores, which prompted Nic and co-founder, Vincent Buhrer, to develop a bespoke wine e-tailer that focuses on quality products. The key differentiator is however that Pot2Port cuts out the costly and risky aspect of the business, being keeping stock. Instead customers place their orders through Port2Port, which then collects the wine directly from the producer for delivery.

“It’s all about customer service, which includes things such as flexibility, ordering single bottles and fast delivery,” Nic says. Quality is another anchor of the business, not only because the business model requires that the wines cost at least R100 a bottle, but because he likes doing things properly. “You need to have confidence in what you sell and I truly believe that South Africa’s premium wines are destined for greatness.”

Nic wants to be part of this growth and the Port2Port platform boasts a feature to personalise the online wine experience and guide clients in wine appreciation.

Instead of launching the concept with another expensive media event, Port2Port invested in a bidding item – which included a weeklong holiday in Italy – at the 2015 AfrAsia Bank Cape Wine Auction. Not only did Nic raise R600 000 for education in the winelands, he met venture capitalist and Wosa chairperson Michael Jordaan in the process.

“Doing things differently always pays off,” Michael says. “It keeps business exciting!” He has subsequently invested in Port2Port through his strategic investment business, Montegray Capital. Nic says Michael’s most important contribution is however the pearls of wisdom he shares – straight from one entrepreneur to another!

The next step for Port2Port is going global (the name could have been prophetic) and Nic’s connections in Europe bode well for this process. “Port2Port is most definitely scalable,” he says. “The challenge is to strategically manage growth so it’s sustainable in the long run. If it succeeds, it’s a Cape Town success story – and that makes me proud.” says the proudly South African, German Italian.