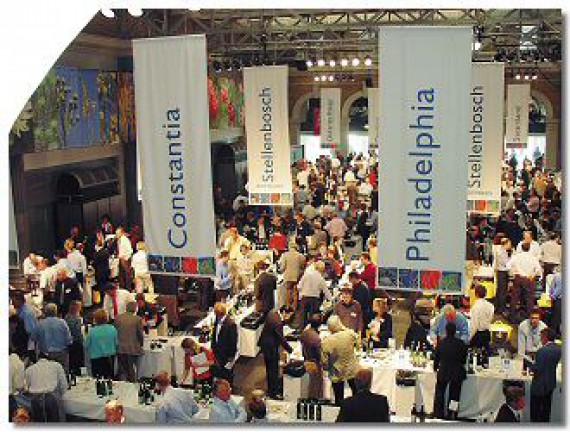 The month of October 2005 will go down in the annals of the South African wine industry as a historic milestone of reaching out with the best the country has to offer in the form of watershed wine tastings in tandem in London and Stockholm. MARYKE HURSTMANN was there to capture the mood.

Never before has so many South Africans gathered under one roof outside the country’s borders to showcase the wineland’s best. Importers, buyers, restaurateurs and sommeliers from all over the world – even as far as Russia, the USA and the Far East – visited Wosa’s Mega Tasting, held at Old Billingsgate on the banks of the river Thames. Over 250 producers took part in a show that focused on South Africa’s biodiversity and the treasures of the winelands. Delegates were treated to South African cuisine such as biltong and koeksisters. The show differed from other generic tastings – the more than 2 200 wines were laid out according to region and specific wineries, as opposed to agents being behind the stall as the middleman.

Madeleine Stenwreth, purchaser of South African wines for Sweden’s import monopoly, Systembolaget, said if current trends continued, this growth might mean that South Africa may well take over the number one position, as Spanish imports only grew by 5,4% and Italian imports grew by 7%. She said Swedish consumers were increasingly buying South African wines, because they offered value for money. Over half of wines sold in Sweden are bag-in-box. According to Stenwreth, consumers don’t equate box wines with lower quality, but they buy wine in this format for everyday enjoyment. South African wines hold a large market share in this sector. As for bottled wine, the average price for South African wines is SEK78 (about R68) per bottle, which is very high and a good sign for the industry.

“The Swedish consumers generally have a good knowledge about wine and they are regular travellers, also to South Africa. When they come home, they can pin-point an area on a bottle where they have visited, so Wine of Origin is an important marketing tool. Regionality and terroir is the way to market South African wines in the premium sector.”

Head buyer Ann Burgaz-Schmidt agrees. “There is a good sentiment towards South Africa and the timing is good. It is seen as a tourist destination for golf, sunshine and relaxation.”

De Wet Viljoen of Neethlingshof said they value meetings such as these, as it gives them a chance to network with the Swedish trade. Herman Hanekom from Steenberg said their focus has always been the restaurant and hotel industry, as they produce food wines. “However, it is important for us, a medium-sized winery, to also be represented on a wider scale, which is we need to be taken up in Systembolaget.” He said he experienced an awareness of South Africa as a “force to be reckoned with”.

The tasting was aimed at local and international media, as well as buyers from the restaurant trade and Systembolaget and gave them the opportunity to network with producers and agents. Wosa also held two seminars for delegates with one accenting biodiversity and the other, led by Warwick’s Mike Ratcliffe, focusing on Pinotage. Both of these were oversubscribed, according to WOSA’s Dalene Steyn.

A closer look at Sweden

Sweden was one of the first countries to impose sanctions on the Old South Africa, but was also one of the first coutries to welcome it back into the world economy after 1994. “Sweden has always had a very emotional connection with the country,” says Madeleine Stenwreth, Sytembolaget’s buyer of South African wines, “partly because of its involvement with the ANC during Apartheid, but also because the Swedish are travellers, also to the Cape Winelands.”.

Systembolaget is Sweden’s one-channel import system. Wine agents are the go-between, but the system has final say about what wine is stocked in its shops and one can only buy wine from Systembolaget shops, or in restaurants. The system as it is known today was founded in 1955. If the System wants to add a fruity red wine to its portfolio, for instance, it will put out a tender. Importers then present their ranges that fit the description and the decision is made by a panel. Up to 40 wines can be tasted on such an occasion.

Following Sweden’s entry into the European Union in 1995, restaurants are however allowed to buy directly from agents. In 2004 the alcohol import quotas were removed and private citizens may today import alcohol into Sweden, provided it is for private consumption.

By far the biggest amount of wine sold in Sweden is bag-in-box. A recent development is that the system will now require a “best before” date stamped on the box, to avoid old stock on the shelves. This date will be 10 months for red wine and eight months for white. As a rule, the monopoly will not accept wines with a shelf life of less than three months and any wines past the best before date will be sent back to the importer. This means that red wine must reach the market within seven months and white wine within five months.

The Cap Classique Producers Association has re-positioned its marketing objectives to highlight the importance of time in the making... END_OF_DOCUMENT_TOKEN_TO_BE_REPLACED

The South African wine industry acknowledges the greater understanding from government with the announcement of the latest excise duties... END_OF_DOCUMENT_TOKEN_TO_BE_REPLACED

The wine industry body Vinpro recently appointed Dr Langelihle (Langa) Simela to its board to provide strategic insights into... END_OF_DOCUMENT_TOKEN_TO_BE_REPLACED
Go Back
Shares