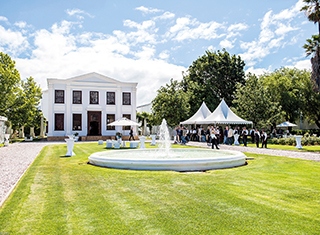 The De Wetshof Celebration of Chardonnay is held every two years to showcase the best local and some international Chardonnays. A highlight of the event is an address by a specially invited international speaker and this year it was the acclaimed American novelist and wine writer Jay McInerney.

“Chardonnay is a superstar, beloved by drinkers and growers and famous all over the world,” he said. “But it’s also an enigma wrapped in mystery. It is, for me, the most seductive and romantic white grape on the planet.”

This was a fitting opener to the celebration themed The Romance of Chardonnay this year. So on a splendid, sun-drenched summer day, pleasantly fanned by a light southeaster, the jovial guests were more than happy to be treated to heartfelt odes to the grape while tasting 20 carefully selected Chardonnays.

Next up was a lavish lunch prepared by distinguished Michelin-star chef Jan van der Westhuizen and judiciously paired with another 15 delectable Chardonnays.

The De Wetshof Celebration of Chardonnay, first held in 2006, is among the most keenly awaited events on South African wine-lovers’ calendar. Its aim is to pay tribute to one of the world’s greatest white cultivars of which the De Wets are the most avid advocates. It’s surprising that this extravaganza is presented by a private enterprise and not a large corporate or organisation. Larger-than-life patriarch and host Danie de Wet, his wife Lesca, their sons Peter and Johann and the latter’s wife Gera unite to form a formidable team who attend to every detail to make the event a success, from the décor to the programme.

The guests represented the who’s who of the wine industry and Chardonnay movers and shakers. Standing side by side with the De Wets were the Hamilton Russells. Both families are pioneers of the Burgundian cultivar in South Africa and played their part in changing formerly restrictive laws on grape-growing areas and import and quarantine procedures.

The new-generation Chardonnays bore testimony to Jay’s notion that the variety today shows a large variation of styles, and is leaner and more balanced and focused than the ripe, buxom-type previously pushed by Napa Valley producers. More Twiggy than Pamela Anderson, he quipped.

Three of the four flights tasted included a top foreign wine as benchmark, all from Burgundy, America and Australia as usual. The tasting incidentally has outgrown the traditional underground De Wetshof barrel cellar and was moved to a large marquee, where winemakers and other representatives gave the background to each wine’s creation and its sense of place.

The selection panel co-ordinator was Dave Hughes, the father of wine writing and judging in South Africa. He was joined on the panel by British-born Master of Wine Richard Kershaw, who now makes his own wine at Elgin.

Marketer Johann de Wet received a special ovation for his presentation of the fresh, floral De Wetshof Bon Vallon 2015, earlier the first unwooded Chardonnay in the country. But the highlight and probably the favourite of the event was the museum-class De Wetshof Finesse 1993.

This classic, which won Danie the Diners Club Winemaker of the Year title in 1996, still has a remarkably pale-yellowish tint, and lively acidity, complexity and minerality. Important factors at the time were early harvesting, new barrel treatment, low Ph and storage 11°C over the years, Danie explained.

Fittingly, the fabulous older vintages flight included a Hamilton Russell Vineyards gem, the Chardonnay 2005, with a prominent yellow colour, complexity and undertones of beeswax and nuts lingering delectably on the palate. Two other individualistic masterpieces were the lively, fruity Thelema 1997 and intense, high-minerality Neil Ellis 2005.

Perhaps the most inexpensive and down-to-earth Chardo in the day’s line-up was the Eikendal Janina 2015 unwooded, presented by assistant winemaker and former farm worker Christo Hanse. It was described by Higgo Jacobs as a Chablis-style, fresh, lean, long-distance runner. It sells at R75 a bottle at the cellar door. In contrast, there was the super-sophisticated, powerful, rich and lingering Puligny-Montrachet Ier Cru Clos de la Mouchere 2014 (Burgundy), imported at R1 600 a bottle.

This year the customary Golden Vine Award for a significant role in culinary excellence was presented to Jan Hendrik van der Westhuizen, only the second South African of six recipients to win this award. Jan is also the only South African to have been awarded a Michelin star. Originally from Mpumalanga and taught to cook by his mother and grandmother in a farmhouse kitchen, he’s now the owner-chef of the Michelin-starred Restaurant JAN in Nice, France.

Jan Hendrik worked his way up in design, photography and food editing for Elle magazine and has published two bestselling cookbooks. His honest, almost naive telling of this life story found great favour with the audience after McInerney’s colourful and eloquent speech.

Earlier, the ‘romanticist’ had given an informative view of Chardonnay’s development and trends internationally and in the Western Cape.

“I’m absolutely dazzled by the quality of Chardonnay available in the country, by the overall high quality of premium Chardonnays, and by the sophistication in the handling of oak, although I’ve also had some fine unoaked examples,” he said.

“There’s also a developing sense of terroir. Cape winemakers are clearly learning where to plant Chardonnay and how to grow and vinify it.

“I can honestly say Chardonnay from the Cape can easily compete on the world stage. I’ve tasted some here that would put many premier cru white Burgundies to shame.

“Chardonnay may be ubiquitous, it may be a cliché in many respects, it may be the source of a lot of mediocre plonk, but it’s capable of great profundity and it can age and develop for decades.”