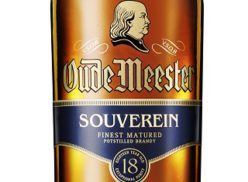 Judges at the 2017 International Spirits Challenge have confirmed what South African brandy masters have known all along – South Africa makes the world’s best potstill brandies.

The Oude Meester Souverein 18-Year-Old scooped the trophy for the World’s Best Brandy at the 22nd International Spirits Competition (ISC) gala dinner which took place this week. It is the fourth time in nine years that a Distell brandy has won this trophy. South Africa’s leading spirits producer, Distell, also won the trophy for Brandy Producer of the Year. Other South African top performers were KWV, with two gold, two silver and one bronze medal, and Oude Molen Distillery, with four silver medals. See the full results at http://www.internationalspiritschallenge.com/isc2017/2017-results.

“It is an honour for a South African brandy to be recognised as the best in the world once again, especially considering ISC’s esteemed judging panel who are familiar with all the leading brandies from around the world. To scoop the title of World’s Best Brandy means the Oude Meester Souverein 18-Year-Old was judged as an outstanding product of exceptional quality, with a rating above 90 points out of a possible 100,” said Nick Holdcroft, Distell Brandy Ambassador.

“We are pleased that we were able to pass the rigorous judging panel and bring home not only the overall trophy for World’s Best Brandy, but also an additional three Gold medals – for the Oude Meester Souverein 18-Year-Old, Van Ryn’s 12-Year-Old Distiller’s Reserve and the Van Ryn’s 15-Year-Old Fine Cask Reserve.” These brandies scored between 80 – 89.9, and are rated as an “excellent product of superb standard”.