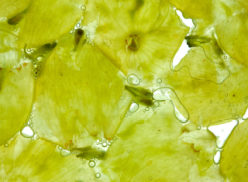 Grapevine cultivars are remarkably adaptable to their environments and responsive to production manipulations. This adaptability is (scientifically) described as phenotypic- or metabolic plasticity. You might not have heard these terms before, but they underpin the observation that under certain conditions the same cultivar can produce very different styles of wines, or in other words, display plasticity. To understand the plasticity of a cultivar, it is necessary to study the underlying physiology and metabolism. To do that, grapevine cultivars need to be studied in interaction with their environment (natural and manipulated). It sounds relatively easy, but it is no simple task. Considering the multitude and complexity of the individual factors potentially affecting field grown grapes, how can one reliably predict the outcome of a viticultural treatment? From a scientific perspective it comes down to the need to establish “cause-and effect” (causality) type vineyard studies. A causal relationship exists when the results/trends of an experiment are proven to be caused by the manipulation, or a specific factor. Such a study of a leaf removal treatment in a Sauvignon blanc vineyard could explain why wine style/typicity can be shifted by increased bunch exposure and provide proof of this cultivar’s metabolic plasticity.

Producers and viticulturists are confronted with a multitude of compounding factors to contend with to produce quality grapes. Some viticultural decisions are long term, and are decided during the initial establishment phase of the vineyard, and include: site selection (e.g. climate, altitude, aspect/inclination and soil), cultivar/clone selection, scion/rootstock combination, row orientation, vine/row spacing and trellising system. Needless to say, these decisions influence the ultimate quality of the grapes and are costly to change once a vineyard has been established.

Other decisions are seasonal, and can include the choice of cover crop(s), the implementation of canopy manipulations (e.g. shoot thinning, shoot trimming and leaf removal), bunch manipulations (e.g. cluster thinning), and timing of winter pruning. The grape yield and/or quality is then further influenced by the prevailing seasonal conditions (vintage) which can be considered as the sum total of all factors that the grapes are exposed to in any given season and will include wind, water (rain and/or irrigation), light, temperature, humidity and disease load (pathogens and pests). These factors do not occur in isolation, and for each of these factors both the timing and intensity is relevant. The challenge is to link these factors to outcomes in causal relationships to ultimately understand their impacts on grape/wine quality.1

We used an early leaf removal treatment in Sauvignon blanc in the moderate (cool night) region of Elgin to study the impact of increased bunch exposure on grape composition throughout berry developmental stages (i.e. green pea size through till the ripe/harvest stage).

Leaf removal is used for diverse purposes, usually with a predetermined viticultural and/or oenological outcome. For example:

Light, but not temperature, was affected by leaf removal in the bunch zone

The vineyard was established in 2004 in Elgin in the Overberg region of the Western Cape coastal region of South Africa. Sauvignon blanc clone 316 was grafted on 101-14 Mgt and planted in a NW/SE row orientation with 2.5 m between-row and 1.8 m in-row spacing. The vines were trellised to a double cordon with a vertical shoot-positioning system and winter pruned to eight two-bud spurs per running meter of cordon. The treatment involved leaf and lateral shoot removal in the bunch/fruiting zone (approximately 30 – 40 cm above the cordon) on the NE-facing side of the canopy (i.e. the facet of the vine that received morning sunlight exposure) at Eichorn-Lorenz stage 29 (~ pea-size berries). In the control panels, no leaf removal was performed. The treatment was maintained throughout the season, keeping the fruiting zone exposed through continuous lateral shoot removal.

At more than 250 m above sea level, Elgin is a high-altitude wine grape-growing region. The elevation and the proximity to the Atlantic Ocean and consequent exposure to the cooling sea breeze, make it the fourth coolest wine grape-growing region in South Africa. This site was chosen as representative of a typical moderate climatic site for the production of a commercially desirable style of Sauvignon blanc wine. The altitude and moderate climate further minimised the potential for sunburn damage of berries in the leaf removal-treated vines. In addition (and of particular importance in this study), the effects of temperature and light, the two climatic variables typically associated with increased exposure, could potentially be separated.

Micro- and mesoclimatic measurements were used to characterise the impact of the leaf removal (increased exposure) on the major climatic variables, namely temperature, humidity, light, and UV. As was expected, leaf removal increased light (including UV) in the bunch zone, while bunch temperature was found not to be significantly affected.

The increased exposure changed the metabolism of the berries

The grapevine’s response to the increased exposure, and the subsequent effect on berry composition, is best described as acclimation: a plant’s innate ability to respond and adapt to its environment. It was clear that different acclimation responses are used at the different berry stages. 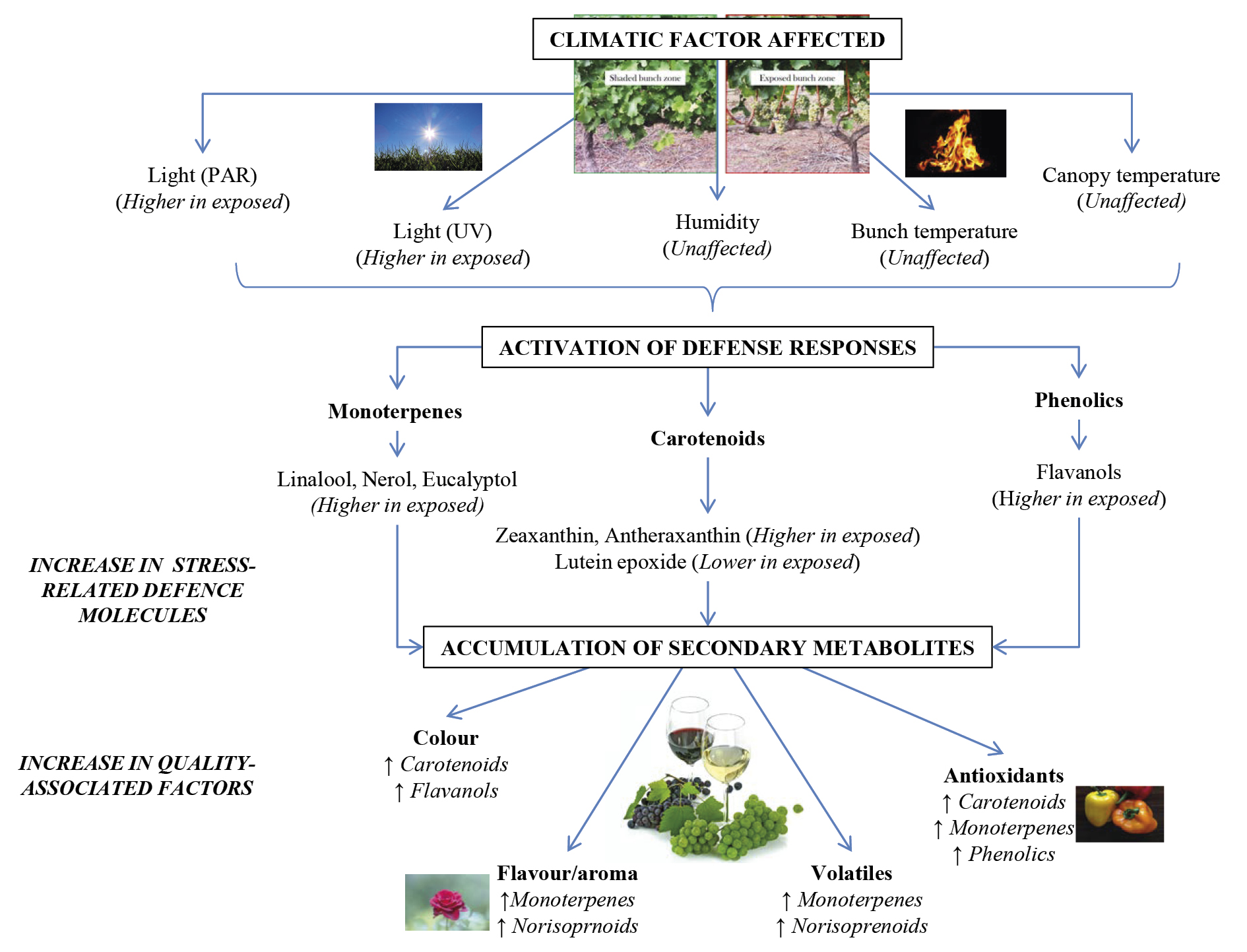 The main findings are summarised below:

The leaf removal treatment did not affect the typical ripening progression of the grapes (relative to the controls). Physical berry parameters (e.g. weight and diameter), and the trends in primary metabolites (the major sugars and organic acids) were not significantly altered at any of the developmental stages by the leaf removal treatment. The perceived stress was therefore managed utilising secondary metabolites prevalent at the specific developmental stage.

The berries respond to the increased light exposure by adapting metabolism to optimise/maintain the processes that it requires for that stage. In the earlier developmental stages, specific metabolites (carotenoids) are upregulated in response to increased light exposure. These carotenoids are involved in the protection of photosynthetic membranes and ensure that active photosynthesis can be maintained under high light (stress) conditions. Interestingly the more shaded control berries utilised different carotenoids to optimise light harvesting under suboptimal (shaded conditions) to also ensure that photosynthesis was maintained. From a wine perspective, cleavage of carotenoid substrates gives rise to the C13-norisoprenoids. These volatile flavour and aroma compounds contribute to the varietal floral and fruity attributes of many grape cultivars (typicity representative of a cultivar) and include β-ionone (typical violet/floral aroma), 1,6,6-trimethyl-1,2-dihydronaphtalene (TDN) (typical kerosene or marmalade aroma), vitispirane and β-damascenone (typical rose or honey aroma). The increased carotenoid levels in the early developmental stages led to a concomitant increase in norisoprenoid levels in the later stages.

As a general rule: Plants upregulate antioxidants during stress

Ongoing research linking the responsive grapevine metabolites to fermentation-related metabolites and sensory attributes has shown that the leaf removal/increased exposure shifted the Sauvignon blanc wine style from a vegetative/grassy to a more tropical/fruity style in this particular vineyard.

Grapevine berries are remarkably responsive to their immediate environment (microclimate), and can modulate/adjust their metabolites to acclimate to perceived stress(es). This plasticity in berry composition is a function of both the cultivar and the environment. Plasticity underpins a grapevine cultivar/cone potential. Clonal selections and canopy manipulations, combined with an understanding of grapevine metabolism and grapevine responses, make it possible to explore berry compositional (metabolic) plasticity towards desired styles, as was done in the Sauvignon blanc experiment.

This research was financially supported by the National Research Foundation of South Africa, Winetech, and THRIP. The details of the research are published in Alexandersson et al. (2014) and Young et al. (2016).