This article will outline three attempts to link grapevine water status to leaf or canopy-level spectral data in an attempt to find the wavelengths that are most suitable for designing possible instrumentation/sensors for monitoring the plant for irrigation scheduling purposes.

Monitoring grapevine water status using pressure chambers (a.k.a. pressure bombs) are increasingly being used in the industry to fine-tune irrigation scheduling, especially considering the need to limit over-irrigation in periods of water shortage. The disadvantage of this method is that it is laborious and requires relatively expensive equipment. Nitrogen gas is also not always easy to replenish in-season and some expertise is required to execute the method properly.

Remote sensing on different platforms, from satellite (i.e. FruitLook), aerial photography, unmanned aerial vehicles (a.k.a. “drones”) and even smartphones (some now have integrated thermal cameras) are available to monitor plant reaction in different wavelengths of the radiometric spectrum, from visible to infrared to thermal. There are, however, not many studies that specifically link remote (or proximal) sensing techniques to plant water status.

The first study was an “extremes” experiment, where Chardonnay grapevine plants in a greenhouse were either well-watered (NS), or not watered (S) over a 17 day period (Figure 1). At the end of this it was possible to differentiate between the leaf spectra, as measured by a field spectrometer (i.e. in Figure 2). Principal component analysis could be used to determine the wavelengths contributing most to the differentiation between the leaves of the two plants (also on Figure 1). Here the areas around the green peak could be used to fully differentiate the plants under these extreme conditions. 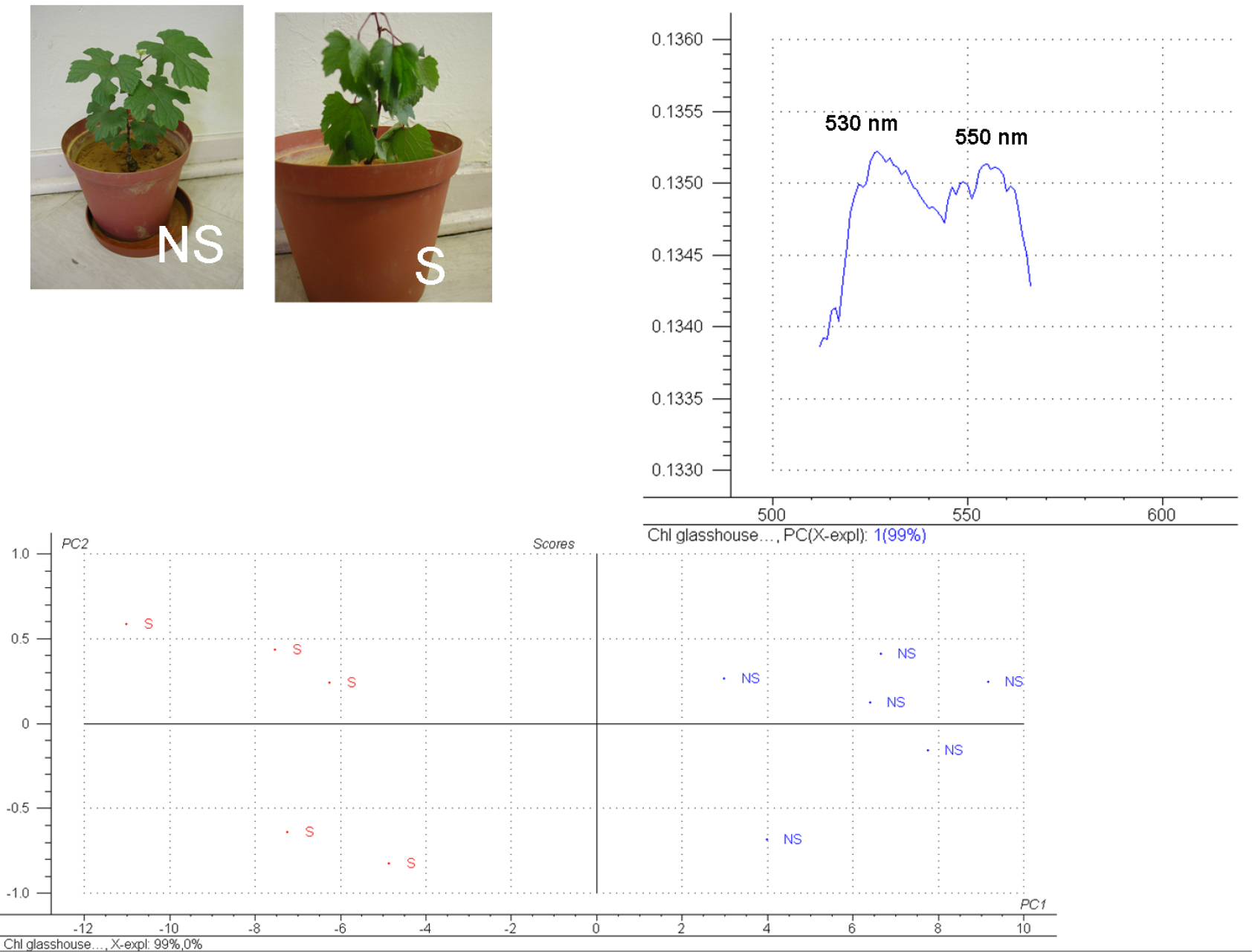 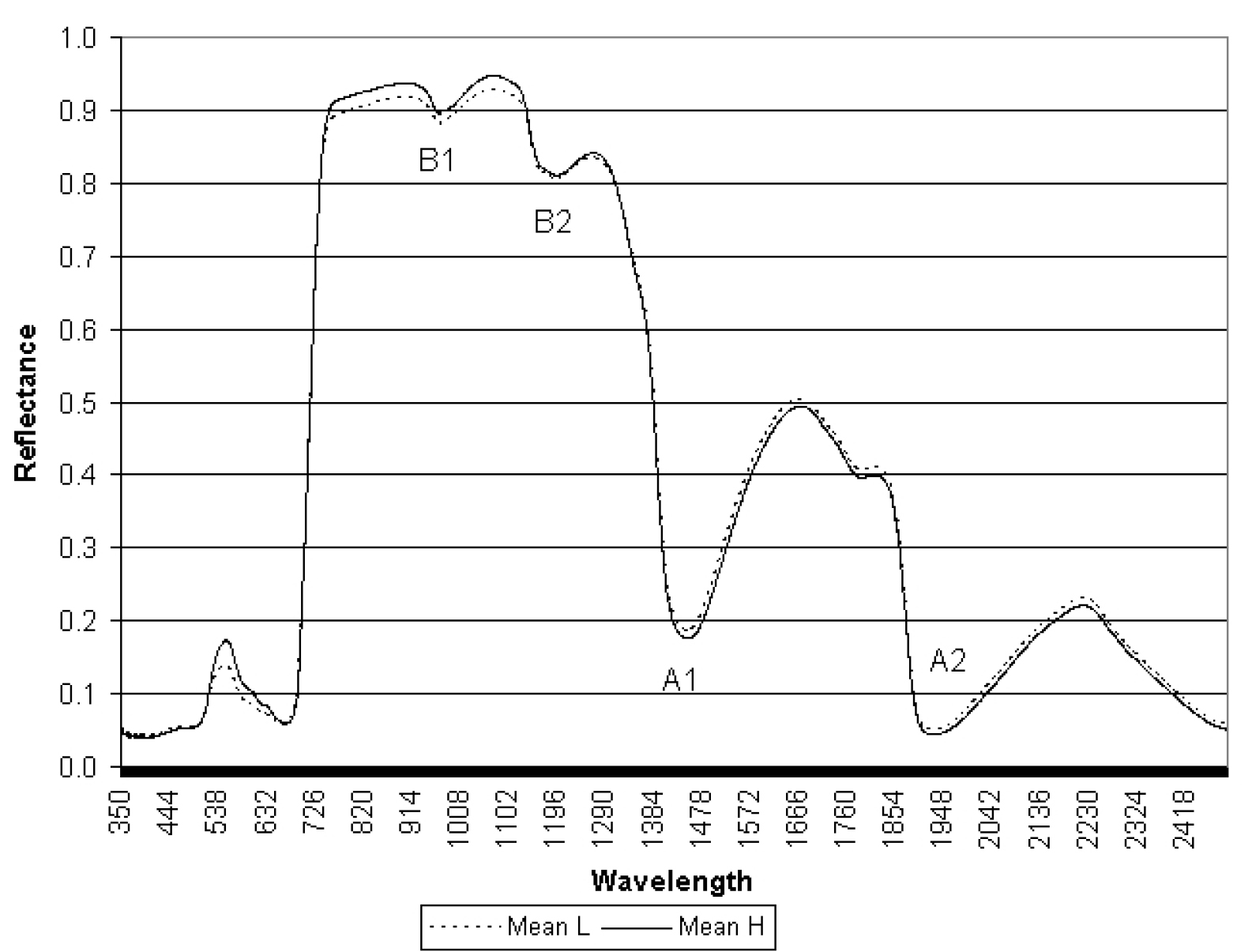 The final set of work was part of a PhD focused on non-destructive determination of pigment levels in leaves of Shiraz in Stellenbosch (Strever, 2012). In this study, older leaves were found to show earlier pigment (chlorophyll) decrease under water deficit conditions, but more significantly the carotenoid:chlorophyll ratios were found to be higher in slightly older leaves. This was found to be a more reliable indicator of increasing water deficits compared to i.e. only chlorophyll content monitoring. The study showed that, together with the chlorophyll a:b ratio, this ratio could be estimated from sensor data on selected leaves, if care is taken to exclude the youngest and oldest leaves in the canopy. Although it did not seem possible to monitor small changes in water deficits, as confirmed by difficult direct prediction of predawn leaf water potentials, specified leaves could be used to monitor important transitions of water deficits in grapevine (i.e. “stress thresholds” for different cultivars). This has to be confirmed in further studies for other developmental stages and water deficit thresholds in other cultivars, also using simpler and cheaper sensor configurations.

To investigate the practical application of some modelled and predicted parameters in this study, the reaction of different irrigation strategies (non-irrigated and irrigated Shiraz) was tested for a period around véraison, with respect to developing water deficits (as confirmed from predawn leaf water potential values measured using a pressure chamber). It was shown that several parameters, with special mention of the carotenoid:chlorophyll ratio and chlorophyll a:b ratio, can be monitored on the previously mentioned selected leaves to assess water deficit level transitions. In addition, spectral data can be used to determine leaf age with an accuracy (tested over more than 2 500 leaves) of between 13 and 16 days. This can help to develop a sensor that would also indicate the suitability of a leaf when monitoring on leaf level (i.e. to avoid measuring on too young or old leaves). Further work of this monitoring on canopy level needs to also be done, and to this end, a similar “extremes” experiment was performed with a hyperspectral camera setup as part of the IGWS Robotics platform in 2017, with some promising preliminary results.

Grapevine water status monitoring is becoming increasingly important due to the variability in soil conditions and sometimes erratic placement and operation of soil water status monitoring solutions for irrigation scheduling. In the context of limited availability of irrigation water, it is important to avoid excessive irrigation due to the lack of regular and reliable measurements of plant water deficits. Although remote sensing has been available for some time in the form of satellite products (i.e. FruitLook), manned and unmanned aerial imagery, it’s use as an irrigation scheduling aid, similar to soil monitoring still needs calibration against the plant’s reaction. Although this is done using pressure chambers or visual appraisal, these methods are either laborious or subjective. Specific sensors may yield a possible low-cost solution to these problems, if the relevant wavelengths of the radiometric spectrum at which plant water status could be assessed may be determined.

Winetech and THRIP for funding.