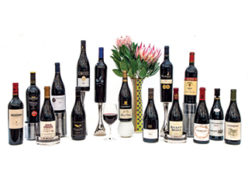 The main aim of this work was to ascertain some sensorial characteristics associated with the top 12 wines compared to four wines that received the lowest scoring at the Shiraz Challenge.

Wine competitions are useful marketing tools that can increase a product’s value by increasing consumer’s confidence. The South African Shiraz Challenge is an annual competition organised by the SA Shiraz Association. During this competition, experienced wine judges evaluate the wines for their quality and award the top 12 wines.

For this project, 20 experienced winemakers participated in a blind tasting organised by the Department of Viticulture and Oenology at Stellenbosch University. These results were already presented by Professor Wessel du Toit during the South African Shiraz Association’s 2016 technical workshop.

The winemakers tasted the wines and evaluated their quality on a 20 point scale subdivided into a global quality rating and separately quality ratings for appearance, aroma and mouthfeel. Judges also included a description of each modality on the score sheet to motivate their rating.

Generally, the lowest scoring wines received the lowest quality marks and they were perceived as light and less complex. However, the top 12 award wines had more complex organoleptic characteristics with layered aroma profiles combined with a good tannin composition.

Shiraz grapes are found in all South African wine regions and it is the second most planted red grape variety in South Africa after Cabernet Sauvignon.1 More than 10 000 ha Shiraz represents 10,5% of the total surface area planted in South Africa. These grapes are used to produce varietal wines (100% Shiraz), as well as red wine blends. Shiraz wines are nationally and internationally very important and are made in different styles having aromas of pepper, spice, blackberry, blueberry, cocoa, bacon, etc.

A large number of SA cellars produce Shiraz wines. Increasing the competitiveness of their product is therefore a priority for SA Shiraz producers. An interesting way to increase a wine’s competitiveness is through participating and winning wine competitions. General wine consumers do not have much knowledge about the product2 and to choose an appropriate wine may be a daunting task.3 Normally, consumers, especially non-expert consumers, trust awards and are willing to pay more for a wine with an award.4,5 Many producers also believe that winning an award will improve their product and brand image, gain the confidence of the consumer and increase their sales.2,6

Wine shows and competitions are held in many wine producing countries and normally winners receive an award that can be displayed on their bottles. Wine awards are an extrinsic cue, often in the form of a round sticker on a wine bottle that serves to indicate to the consumer that experts have judged the wine on its intrinsic characteristics to determine the overall quality.7 During these competitions, a group of very experienced judges normally taste the wines in a blind manner and evaluate and compare their organoleptic characteristic as appearance, taste and mouthfeel, smell and balance and typicality.

In South Africa, more than 30 wine competitions are held every year and the annual SA Shiraz Challenge is very important for Shiraz producers. The SA Shiraz Association organises this competition and it has been launched for the first time in 2013. During the SA Shiraz Challenge, the top 12 Shiraz wines and three blends are selected and awarded. In 2016, more than 200 wines entered this competition. During three days, eight highly experienced judges evaluated the wines on a 20 point quality scale.

The Shiraz wines awarded during the 2016 competition in alphabetical order were:8

The tasting consisted of evaluating the 16 wines with the lowest scoring wines (wines A, C, L and O). The 20 winemakers tasted the wines blindly in a randomised order and were asked to score and describe the quality of the different sensorial dimensions of the product. For the scoring, they used a 20 point scale. For the description, the judges were requested to provide three to five descriptors that best describe their sensory perception for each of the sensory dimensions (appearance, aroma and mouthfeel).

To obtain a summary of the descriptors used and how often these were used by the winemakers, a process called lemmatisation were used. Lemmatisation consists of counting the frequency of each word for each wine. Once counted, the words with a similar meaning are summed together (e.g. acid, sour and acidity are summed under the group acidity) and then only the groups that were cited at least three times for a wine are considered for further analysis. Therefore, the number of words represents the number of groups cited at least three times for at least one wine. The frequency of citations represents the number of the words multiplied by the number of times this word were cited to describe the specific wine. These two parameters give an idea of the complexity of the wine, with a more complex wine having more descriptors that are cited more often.

The next step in elucidating the sensory characteristics of the wine was to visualise the consensus between the winemakers and what words were more frequently used to describe the wines. For this, word clouds were built based on the frequency of each word in each wine. Word clouds are easy to interpret. The more frequently the panel used a certain descriptor, the bigger and bolder it appears in the word cloud, with it being used more frequently by the panel.

Interestingly enough the global quality scores were not always significantly lower when the lower scored wines from the Shiraz Challenge (wines A, C, L and O) were evaluated against the award winning wines by the winemakers, although the average of these scores were often lower compared to the award winning wines. No significant differences were observed between the top 12 wines in terms of the quality score. This means that all these top 12 award winning wines were rated similar in quality by the winemakers and the differences among them were due to their individual sensory profiles. The sum of citations used (indicated in brackets next to the title of each wine in the word clouds in Figure 1 to 4) were also more in the award winning wines, leading to the conclusion that these wines were probably more complex.

Looking at the words that characterise the organoleptic perception of the wines, one can clearly conclude that in this competition judges awarded different styles, but with a clear varietal typicality of the dark colour, spiciness, woody and fruitiness. The Alto, Babylonstoren, De Morgenzon and Rickety Bridge wines having a number of different descriptions with fruity being prominent (Figure 1). In the Cederberg, Saronsberg, Windmeul and Laborie the wood descriptor were prominent (Figure 2), with Eagle’s Nest, Strandveld, Fairview and KWV (Figure 3) having the spicy characteristic being prominent. However, it should be kept in mind that in all these top 12 wines they all had a number of descriptors linked to each one. Wines A, C, L and O (Figure 4) were often described as presenting some oxidative or Brett notes together with thinner and not so well-balanced mouthfeel.

Generally, the top 12 award winning wines had a deep purple colour and well-integrated layered aroma notes that were nicely supported by a full elegant palate. It also seems that the award winning wines were complex with a combination of positive characteristics being used to describe these wines.