Seven baboons were killed since permits were granted to two Constantia farms plagued by their raiding. 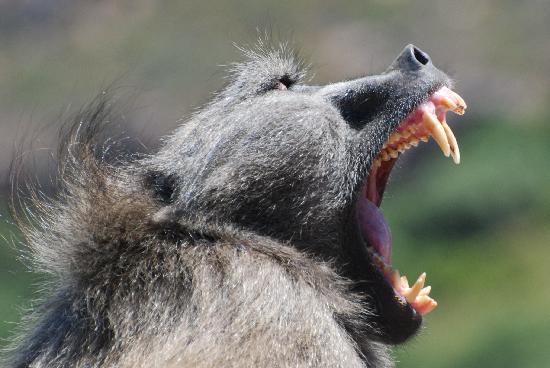 However, conservation authorities and experts have warned of the deeper complexities of the situation.”The local vineyards in Cape Town have invested hugely in game fencing and aversive conditioning for many years as non-lethal options to prevent baboons from damaging their crops and infrastructure,” explained Professor Justin O’Riain, director of the University of Cape Town’s Institute for Communities and Wildlife in Africa.

“Unfortunately, baboons are the most artful of all dodgers and successfully overcome most deterrents.”

Marietjie Engelbrecht, spokesperson for CapeNature – the Western Cape’s conservation authority – told News24 that two permits were granted “as a last resort” to Klein Constantia and Buitenverwachting.

The permits were valid from October last year to October this year, and seven baboons had been killed during that period until now.

“The applicants were able to prove that they have implemented multiple non-lethal mitigation measures over a number of years to try and prevent the continued damage to vineyards and infrastructure without success, and experienced extensive losses,” said Engelbrecht.

She reiterated that the permits were not in any way for recreational hunting and that extensive evaluation procedures took place before they were granted.

Speaking to News24, O’Riain said there was some level of determent after a baboon shooting: “When the baboons get shot; the others do get a huge fright; they leave the area, but they learn to avoid that particular hunter. When the hunter is absent they will return for the rich pickings.”

As such, “if the farmer has tried all the non-lethal options and still suffers damage, provided the farmer removes the damage-causing animal, then he/she may experience some short-term relief”.

However, as for whether it was a good idea, he mused – “it is a distant second to non-lethal methods”.

“We are all complicit – everything we eat comes at a cost to wildlife…We have broken almost every eco-system and many now have to be actively managed if we want to balance food security with wildlife preservation.”

For example, unlike in an area such as Franschhoek where leopards still naturally controlled baboon population growth, in the Cape Peninsula, the natural predators of baboons had been removed.

Consequently, and in conjunction with food they obtain from farms, the baboon population in the Tokai region had grown from about 180 to 260 in the last five years – and over the last decade has been growing steadily at a rate of 8%.

Furthermore, said O’Riain, in many provinces, permits were not needed at all before killing wildlife.

“In other provinces, there are no bag limits nor are there even permits required for killing species like baboons that are classified as vermin,” he explained.

“Thus, in Mpumalanga, an avocado farmer does not need to apply non-lethal methods before killing baboons that threaten the crop…I have to reflect on that truth every time I eat one of my favourite food items.”

In contrast, the City of Cape Town had invested approximately R12m in non-lethal methods to prevent the raiding of properties.

However, the baboons had adapted to this by changing their raiding schedule – instead of coming out at night when the crew had gone home, or very early in the morning, before they had arrived.

Even if state-of-the-art electrified fences were erected, baboons would find a weak point in the fence, such as one where a porcupine dug beneath.

Engelbrecht added that, in the case of the Constantia farms, besides the rangers, they had also tried these electric fences, as well as noise aversion technology and the placement of smells that aimed to create a ‘virtual’ sense of a fence to deter baboons.

O’Riain said that, when the final resort became the killing of a raiding baboon, a key issue was that the other baboons soon became wily enough to identify the shooter; avoid them and return at all other times.

“For example, I have seen that when baboons are being shot with darts – once they have seen the vet with the dart gun, the vet cannot get anywhere near them again.”

O’Riain explained that baboons were so good at reading body language that historically, when farmers tried to dress up like women – in dresses and a bonnet – to get near to them to shoot, the baboons would recognise it was a man, simply by the way they walked.

Ultimately, if certain baboons were shot, “the others will learn that the vineyard is now more dangerous, and they will even learn which car will deliver the human who can kill. But when that person is not there, they could return”.

Furthermore, the killing of baboons was not a silver-bullet solution since scientists were still trying to understand why some baboons became raiders and others didn’t.

As such, the idea of the random shooting of baboons in a troop that was raiding was no guarantee that others might not afterwards follow in their paw prints.

“We don’t know the full answer for that behaviour yet but we are partnering with colleagues at Swansea University to understand raiding dynamics in troops and how removal of individuals affects stress levels and social interactions within troops.”

Food comes at a cost to the environment

O’Riain also asserted that it was important to remember that the issue of animals interrupting agricultural activities was not exclusive to the wine industry.

“All farmers in the Western Cape may apply to CapeNature for a permit to kill wildlife that damage their property and adversely impact on their livelihoods.”

It is important that the public understands how this process works and if they do not agree with it, to take it with the relevant authority and legal statutes as they pertain to wildlife management.

“There is thus no real difference between a Constantia wine farmer, a Karoo livestock farmer or a Grabouw orchard farmer when it comes to process and permitting for lethal management of species that are neither threatened or protected.”

As such, “cereals, beers, fruit, vegetables, meat and dairy products are all similarly produced at a cost to wildlife”.

Even ploughing a field to plant wheat resulted in a massive initial loss of wildlife; one that was “seldom factored in to our daily bowl of cereal”.

“The take-home message is that there are no free lunches when it comes to feeding humans, from a wildlife impact perspective,” he asserted.

This incident provides the public with an opportunity to reflect on this inconvenient reality.