The rest of the wines were left for 46 days at a constant -4′, 15′ and 37’C. The average temperature of the 15’C and variable temperature treatments were very similar over the 46 day trial period.

The wines were then sensorially evaluated by a trained sensory panel of eight judges using descriptive analyses. This sensory method makes use of a line scale where panellists have to indicate the intensity of a certain aroma or taste that they have been calibrated for. The panel consisted of post graduate students and staff of the Department of Viticulture and Oenology, Stellenbosch University. All tasting were conducted in a blind manner and in a random order. After this first trail with four treatments, we also exposed additional bottles of the 2010 Chenin blanc wine to 37’C and 15’C for 7 and 14 weeks for a triangle tasting. For more detail Du Toit and Piquet (2014) can be consulted.

In Table 1 the sensory results of the Chenin blanc wine can be seen. It is clear that those wines left at a constant 37’C had much higher levels of yellow colour, sulphur off odour, over-aged aroma and a burning aftertaste, which are all negative characteristics often used to describe white wines that was left for too long at high temperatures. These wines were also rated significantly lower in terms of positive aroma characteristics, such as tropical and fruity aromas. However, no significant differences could be observed between the -4’C, variable and 15’C treatments. Similar results were obtained with the Sauvignon blanc wines, but some of the positive fruity aroma compounds were slightly lower in the variable and 15’C treatments compared with that the -4’C treatment. However, these differences were, although significant, still small (around 3% decreases), while the wines left at 37’C had much larger decreases in fruity aromas and high increases in negative associated sensorial characteristics as found in the Chenin blanc wine. It thus seems that temperature variations does not seem to play such a large role in white wines matured in the bottle, but rather the average temperature it is exposed to. A white wine thus stored at say 2 – 12’C (which is a temperature variation of 10’C), will thus age much slower than the same wine left at say 20 – 22’C (which is a temperature variation of only 2’C). These simulated shipping temperatures also did not affect the sensory characteristics of the wines to such a large extent, but high temperatures of up to 50’C during summer has been recorded in some shipping containers.

As the tasters could clearly distinguish the 37’C treatments from the rest after 46 days, we were interested to assess whether they could perceive it at an earlier stage. The Chenin blanc wine was thus also stored at a constant 15’C and 37’C and assessed after one and two weeks. After one week a triangular tasting showed that the panel could not distinguish between these two treatments, but after two weeks they could, indicating that after such a short period of time the wine already underwent a drastic change at such a high temperature.

High temperatures are known to increase acid hydrolysis of certain fruity esters, as well as the hydrolysis of 3-mercaptohexanonacetate, which is responsible for the passion fruit and guava aromas in Sauvignon and Chenin blanc wines (Coetzee et al., 2012). These breakdown reactions do not need oxygen and can thus proceed even if the wines are closed under screw cap, which should be kept in mind by the producer when shipping or storing wines.

The author would like to thank Winetech and THRIP for financial support of this work.

The aim of this study was to contribute knowledge towards the formulation of an integrated pest management program, as... END_OF_DOCUMENT_TOKEN_TO_BE_REPLACED

Winetech vine and wine innovation watch: KPA for the tartrate stabilisation of wines

What is KPA? Potassium polyaspartate (KPA) is an approved wine additive (OIV-OENO 543-2017). It is commercially produced from aspartic... END_OF_DOCUMENT_TOKEN_TO_BE_REPLACED 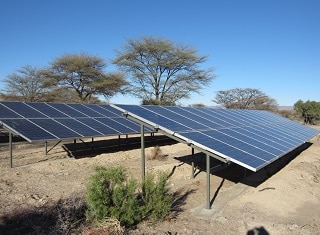 Decreasing the cooling cost of cellars

The local supply of electricity stumbles from one failure to another. Load shedding became a reality in South Africa,... END_OF_DOCUMENT_TOKEN_TO_BE_REPLACED
Go Back
Shares