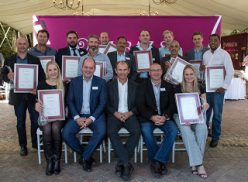 The winners at the 2017 Shiraz SA awards proudly show their awards.

A dozen excellent Shiraz wines and three impressive Shiraz blends caught the spotlight at the recent annual Shiraz Challenge at Rhebokskloof. According to SA Shiraz chairman, Edmund Terblanche, about 220 wines competed for the top positions. “We initially focused on Shiraz, but later on decided that winemakers should also be able to enter their best blends to increase the scope of this competition,” says Edmund. “There is continued growth in die blend category, not only for Rhône styles, but also for all blends where Shiraz is the main component.”

The top three Shiraz blends were: