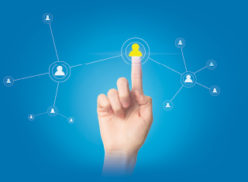 Love it or loathe it, social media has irreversibly changed the internet landscape by changing the way large groups of people interact with one another on a daily basis. It means people are talking about you. Are you listening?

We’ve become so used to websites it’s strange to think the first one was published less than 30 years ago in 1991. It didn’t take long for the internet to become part of everyday life. Until 2002 it was still possible to think of these developments in pre-internet terms, with screens and pixels playing the part of paper and ink, and messages passing from a sender to one or more receivers and back. But since then websites have become much more responsive and started to play a much greater role in our daily life. Web 2.0 put users behind the wheel and gave them the tools to contribute and distribute new content.

Social media refers to online communication platforms that encourage community-driven content creation, sharing and collaboration. According to Arthur Goldstuck’s SA Social Media Landscape Report 2018 (bit.ly/smlr2018) Facebook is the biggest social media platform in South Africa with almost 30% of the population (about 16 million users) signed up. Research shows 14 million users access the site from their mobile devices. Twitter, the next biggest platform, connects about eight million South Africans, while LinkedIn stands at 6.1 million. Instagram and YouTube are catching up fast, reflecting a steady increase in bandwidth and connectivity that make video streaming and live feeds possible. Take note: Twitter users are most active from 8:00 to 9:00 and again at about 18:00.

Getting on board with social media can feel like trying to jump onto a moving train or into a raging river. That’s why brands give the job to their “strongest swimmer” – someone who believes in the message and isn’t afraid to champion it. Social media champions are the invisible heroes who monitor the airwaves, field customer queries and execute marketing strategies. They’re the amateur photographers and tireless salespeople behind every media campaign without whose scrolling thumbs a brand would miss the boat or drown in a flood of information.

Champions function inside the organisation while influencers are independent of the brand. Understanding and interacting with your audience allows you to identify potential brand ambassadors who can pass your message on to their extended audience. These users may not be celebrities in traditional media, but instead have a large base of followers on Twitter, Instagram or YouTube who relate to them and trust their opinion.

“You need to know the right people to get doors opened for you,” digital marketing agency ShiftONE founder and CEO Dylan Kohlstadt says. “If you don’t know the right people, then work out who does and see how you can work together.” Influencer marketing can magnify the word-of-mouth effect, lend credibility to your brand and provide brand traction that would otherwise have been hard to acquire.

These days it’s easy to get large numbers of followers by artificial means, which means an influencer’s actual “influence” can in reality be negligible. For this reason, the trend is to prefer micro-influencers – people with fewer followers (less than 100 000), but who are active on their platforms and have a genuine connection with your brand, making their endorsements more authentic.

Online communities tend to form groups that interact mostly among themselves. Knowing your target market and the type of consumer segment you wish to engage with helps you identify the opinion leaders in a particular group (see vinpro.co.za/look-local) and find ways to collaborate with them. One such example is Zaid Osman, who was so impressed by the local sneaker culture when he returned to South Africa from America that he opened the Sneaker Exchange
(@SXC_ZA). It was a massive success.

People are interested in interesting people having interesting experiences at interesting places. Social media fulfils this desire by allowing anyone to become part of a story. At the same time, storytelling is becoming more visual. International technology company Cisco predicts that by next year video will comprise 86% of all web traffic.

So whether it’s Gareth Cliff (@GarethCliff), Bonang Matheba (@bonang_m), Julia Anastasopoulos (@SuzelleDIY) or Jan Braai (@janbraai) who floats your boat, these are some of the people telling the stories your customers want to hear. If you care about them, you should be listening.

Getting the most out of social media means familiarising yourself with a few basic tools and technologies.

JPEG is an image format that most people are familiar with and is perfectly suited for most purposes, especially where colour is important. Other popular formats include .png which can include a transparent layer allowing the background to show through and .gif which can display multiple images in a sequence, making it popular with commenters who like to depict their reactions with a moving image.

Canva.com is a popular tool that enables users to combine text and images for a wide variety of purposes. Even without any knowledge of graphic design, the results are formatted correctly and look clean and well designed.

The increasing visual nature of the web means high-quality images are no longer optional. Fortunately you can download professional photos from sites such as unsplash, pexels and pixabay. Especially look for images that bear a Creative Commons Zero (CC0) licence, which means they’re free for personal and commercial use and don’t require any prior consent or credits.

Any place where large numbers of people are encouraged to speak their mind can quickly turn unpleasant. Social networks straddle the line between a public platform and an intensely personal space. That means even a message posted in the most general terms can potentially be taken personally and lead to public embarrassment. It can be exploited by so-called internet trolls – people who write inflammatory and provocative messages simply to elicit a predictable reaction. Don’t be a troll and don’t get drawn into discussions with trolls.

According to marketing guru and facilitator Walter Pike (@walterpike), brands should be especially careful to avoid topics involving race, religion, politics and profanity. Getting caught up in divisive discussions online rarely turns out well and can cause serious damage to your public image.

A good rule of thumb is to treat every message as if it were public and delivered face to face. Be friendly, have fun, and enjoy the advantage.