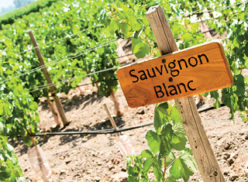 The effects of climate as one of the terroir attributes on wine style and quality are generally well understood, while there is much uncertainty concerning those of soil type.

Researchers have reported that soil affects grape composition and subsequently the style and quality of wines through its moisture levels, water holding capacity and drainage properties, nutrient availability, penetrability, heat retaining and light reflecting capacities.1,2 Researchers started studies on the effect of soil type on wine quality under South African conditions during 1973.3 Such knowledge is required in order to make better viticultural and oenological decisions or predictions, as well as to ensure that the potential of a specific vineyard or wine region is fully utilised.

The study investigated the effects of soil types on the performance, wine style and quality of Sauvignon blanc through:

A Sauvignon blanc/Ruggeri 140 vineyard in a commercial wine estate at Elgin was studied for four years (2006 – 2010). The vineyard was established during 2000, at an altitude of 508 m, on a 28% slope, with SSW aspect, 1.3 x 3.0 m planting density and under drip irrigation (supplemental). The vineyard had two experimental plots representing soil properties that varied to a certain degree. An automatic weather station was installed at the site and some of the climatic data were obtained from three weather stations positioned in Elgin. Soil and root profile studies were performed at the commencement of the study. Soil water contents and grapevine water stress levels were monitored, while selected grapevine parameters were quantified. Grapevine nutritional status was assessed on leaf petioles and blades, as well as juice. The target sugar levels for harvesting were between 22.5°B to 23.0°B. The must were analysed chemically, thereafter experimental wines were prepared in duplicate by using a standard production technique. An experienced panel of judges performed sensorial evaluations on the wines. Data from the four seasons were used as replicates and analysed statistically in order to determine differences due to soil types (p ≤ 0.05).

Mean February temperatures ranged between 19.6°C and 20.6°C in Elgin during the study period, qualifying Elgin to be climatically classified as a cool region (Table 1).

Weather conditions during the four seasons could be described with reference to Table 1 as follows:

The site could be placed in Region I (Winkler index = 1 308 degree days), indicating its potential to produce high quality white table wines characterised by high acids, low pH and excellent cultivar character. While some parts of the traditional South African wine growing areas fall in Region II, large parts of areas, such as Robertson, Stellenbosch/Durbanville and Bottelary-Simonsberg-Helderberg, fall under Region III and even Region IV. Summer maximum temperatures and Mean February temperature were respectively about 1.6°C and 1.4°C lower than the LTM values for Elgin (Table 1). This suggested that the site experienced lower temperatures than the “average” locality in Elgin. In addition, high wind speeds, e g daily maximum wind speed of 6.2 to 7.3 m/s, were measured at the site during some seasons. Generally, cool and windy conditions prevailed at this high altitude site.

Both soils were classified as a Tukulu form (orthic A and neocutanic B horizons underlain by unspecified materials with signs of wetness). One soil contained appreciably higher amounts of gravel than the other, resulting in the soils being labelled as high-gravel and low-gravel (Table 2). Carbon levels in the upper horizons were high for both soils, pointing towards relatively high N supplying capacities. As a result of fertilisation, the high-gravel soil ended up with higher P (topsoil) and K (subsoils) levels than the low-gravel soil (Table 2). Furthermore, the high-gravel soil tended to have lower soil water content and water holding capacity (WHC), especially in the deeper subsoil than the low-gravel soil, which might have caused it to have a better heat retaining capacity.

Only acidity was significantly affected by soil type when data from all vintages were combined and it was higher for wines produced using grapes on the low-gravel soil than for those made using grapes on the high-gravel soil (Table 3), which aligns with previous observations in relation to TTA. Noticeable acidity is also typically associated with white wines from cooler climates. Indication is that the low-gravel site was probably cooler than the high-gravel site, due to higher soil moisture. 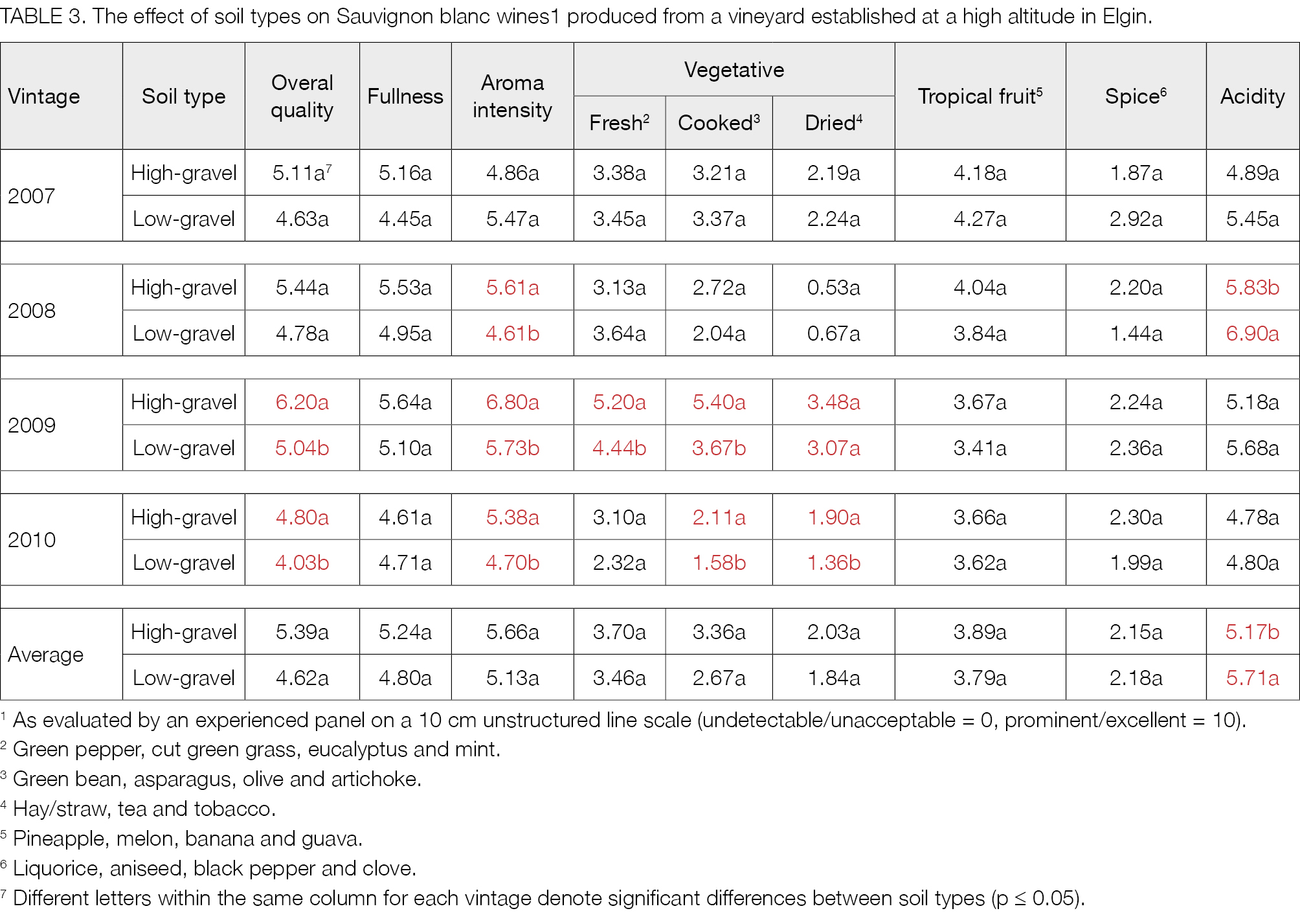 Although grapevine water stress did not differ considerably between the two soils, grapevines on the high-gravel site might have experienced sufficient water stress, which resulted in better grape-juice composition, especially during seasons with wet conditions. This could be because the high-gravel site had soils with the ability to retain less water and probably more heat, as well as less developed root systems compared to the low-gravel site. However, during dry and/or exceptionally warm seasons, a reverse situation may be expected at such cool localities, and soils with high a WHC and better developed root systems may produce better and more aromatic wines.

The effects of soil types on the grapevine performance, wine style and quality were assessed for a Sauvignon blanc vineyard at a high altitude (508 m) with two Tukulu soils (high-gravel and low-gravel) over four years (2006 – 2010). The site was in Elgin (Overberg district, Western Cape) and cooler than most of South Africa’s traditional wine growing areas. The two Tukulu soils differed regarding gravel and water contents, water holding capacities and mineral contents. The root system in the low-gravel soil was regarded as better developed than that in the high-gravel soil. The P-levels, as well as bunch weight, were significantly higher for grapevines on the high-gravel soil than those on the low-gravel soil. The low-gravel soil produced wines with significantly higher acidity than the high-gravel soil, which was attributed to must total titratable acidity levels. Additionally, the high-gravel soil generally produced wines that were more aromatic and of better quality than the low-gravel soil, when wet conditions and warm summers prevailed. The study could not pinpoint the exact mechanisms grapevines respond to soils, but it creates a grower’s awareness of possible soil-effects on wine style and quality via grape composition and the extent thereof under specific climatic conditions.

Funding for this project was provided by the Agricultural Research Council (ARC) and Winetech. The authors wish to thank the staff of the Soil and Water Science Division of the ARC Infruitec-Nietvoorbij for technical assistance, D. Rowswell and I.O. Joubert from the ARC Institute of Soil, Climate and Water for climate data.