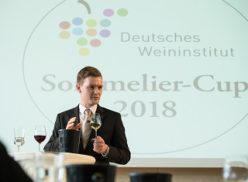 The Sommelier-Cup is a competition organised by the Germany Wine Institute (DWI) which took place from 28-29 January in Mainz, one of the cities in the Great Wine Capitals network. The competition was spread over two days and comprised of various theoretical and practical tasks, with a special focus on German wines. Around 30 sommeliers from across Germany competed, many from renowned Michelin-star establishments.

The preliminary round consisted of four written exams and five blind tastings, each with 9 wines. Contestants had to show a strong understanding of grape varieties, growing regions, wine profiles, food pairings, service standards, restaurant calculations, wine law, viticulture, oenology and sensory evaluation. After lunch on day two, the top contestants were announced for the final taking place that afternoon in front of a formidable jury – comprising of notable sommeliers, wine journalists, and representatives from the German Sommelier-Union and sommelier schools.

The final consisted of three parts: Firstly, two wines had to be tasted blind, factually described and identified. In the second part, the finalists were quizzed on various topics by Romana Echensperger MW. Finally a service situation was mimicked where the contestants had to propose and substantiate a detailed food pairing for three provided wines.

Wessels was the only finalist to correctly identify the white wine (a 2016 Silvaner from Franconia), whereas the red wine proved elusive for all three finalists. The food and wine pairing scenario offered an interesting task, calling for a perfect pairing with an orange wine. After jury convened and scores were totalled, Jo Wessels was announced winner. Second place went to Kevin Kleu and third to Sebastian Schütz.

Says Wessels: “I am quite proud of the achievement! The competition was tight – many of the other contestants are full-time sommeliers at their respective establishments, whereas I’m only working part-time as a commis sommelier, so getting this far is a feat in itself! Furthermore I’m quite happy to have overcome the language barrier of the competition. Everything took place in German, which is a learned third language for me.”

But is it not strange for a foreigner to be awarded with the title of best German sommelier? Wessels answers: “I think it speaks highly of the ideals of inclusion and the spirit of generosity of the German wine industry. I am very happy to have been warmly welcomed in the wine family here. The sommelierie scene is particularly dynamic and a good fraternity. It is truly a joy to be involved here!”

Wessels is currently studying towards a BSc in International Wine Business at Geisenheim University. Complementing his studies, he works part-time at ENTE Restaurant in Wiesbaden, a Michelin-star establishment with a history of hosting some of Germany’s top sommeliers. Furthermore he is enrolled for the WSET Diploma and working towards the qualification of Sommeliermeister through the German Wine & Sommelier School. Nonetheless he remains strongly involved with South African wines, helping Wosa in Germany at events such as ProWein and other tastings.

“I hope to make all South Africans proud with this achievement. Winning the Sommelier-Cup has provided me with an incredible platform, and I hope that I can also use it to further South African wines in Germany. But my first priority is to finish my degree at Geisenheim, so that I can enter the full-time job market again!”