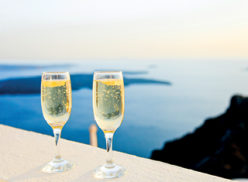 In this study, we investigated the effect of grape temperature at pressing on Méthode Cap Classique (MCC) phenolic extraction, content and evolution throughout winemaking.

Traditional sparkling wine (TSW) winemakers do not desire a high phenolic content in wines, because it has been shown to have negative effects on the processing of TSW. Early harvesting when the phenolic maturity is low, light pressing of grapes and the lack of skin contact are used to obtain low phenolic levels (Zoecklein, 2002). Chilling grapes at 10°C has been shown to decrease phenolic extraction into juice (Gil-Muñoz, 1999). TSWs have lower phenolic levels compared to table wines (Chamkha et al., 2003). Due to viticultural and vinification practices, the phenolic content of sparkling wines comprises mainly non-flavonoids (Ibern-Gómez et al., 2000).

Winemaking was described in Part 2 of this series (Do chilled grapes make better MCC?). Samples were taken at the stages indicated in Figure 1. 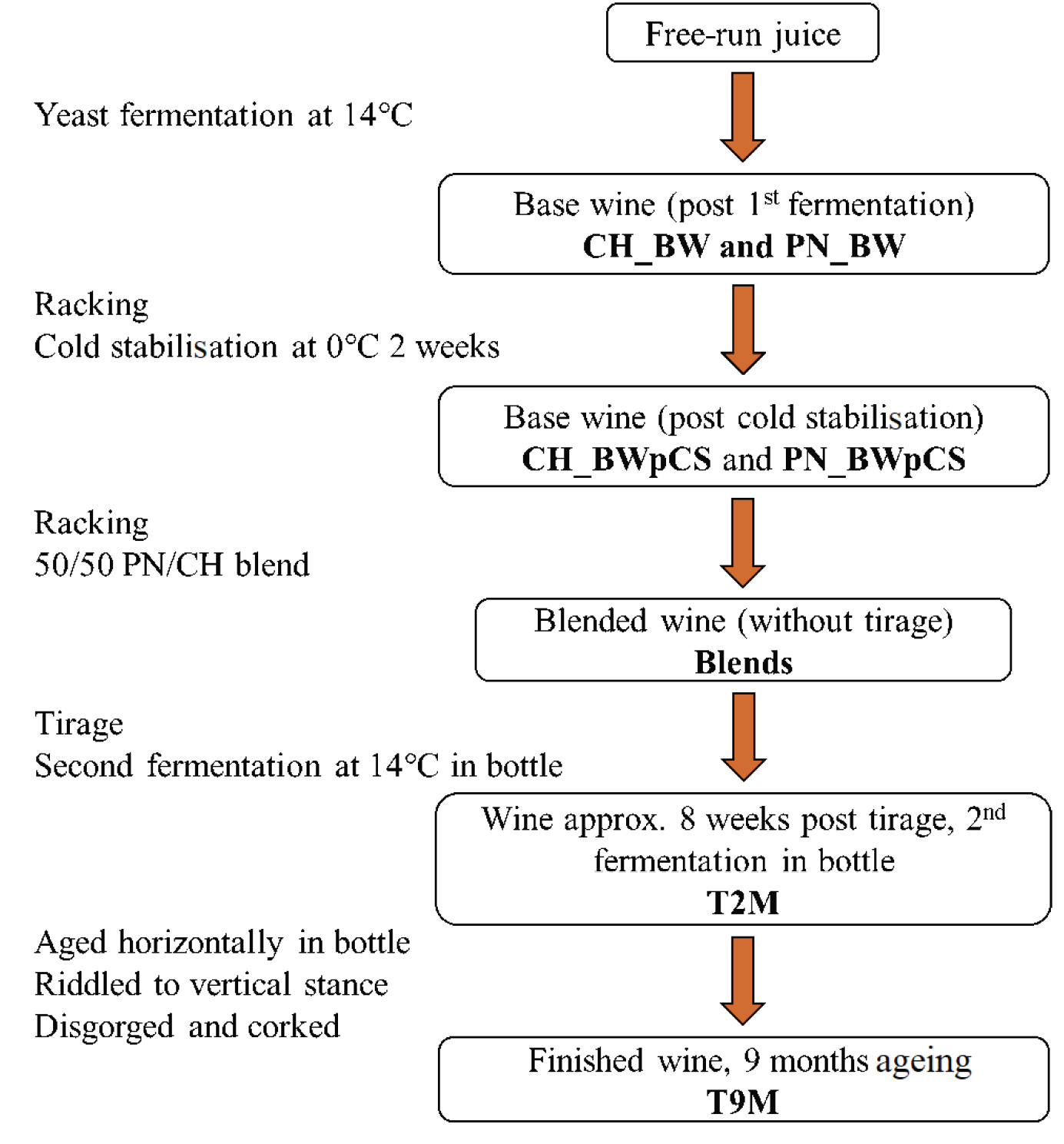 Grapes stored at 25 and 30°C resulted in lower berry sugar concentration (at pressing) than those stored at 0 and 10°C. Since there was no SO2 added to the grapes prior to storage, the conversion of sugar to alcohol by native yeast at higher temperatures may have resulted in lower sugar content in the juice. All oenological measurements (Table 1) were within the ranges reported in literature (Zoecklein, 2002). The 25°C treatments in 2015 were irretrievably stuck during the first fermentation and hence excluded from the final analysis.

Total phenolics (TP) were measured at 280 nm and quantified using a gallic acid calibration curve (concentration expressed as mg/ℓ gallic acid equivalents, GAE). Since the hydroxycinnamic acids have been shown to be the highest contributors to the TP and play a role in the stability and evolution of TSW (Ibern-Gómez et al., 2000), total hydroxycinnamates (TH) were measured (at 320 nm). The colour intensity (CI) is the sum of the absorbance at 420 and 520 nm wavelengths. The colour hue (CH) is the ratio of absorbance at 420 (brown) and 520 nm (red).

Grouping according temperature was observed for both farms in both 2014 (Figure 2) and 2015. Higher temperature treatments (25 and 30°C) were significantly higher in TP, CI and TH than the lower temperature treatments from blends to the final MCCs. This may have been due to higher enzyme activity at higher temperatures, which in turn leads to cell breaking and subsequent extraction of phenolics into the juice. Samples from 2015 were higher in phenolics than 2014. The TP during both vintages was lower than the 176 to 195 mg/ℓ GAE range reported for Champagne in literature (Chamkha et al., 2003). 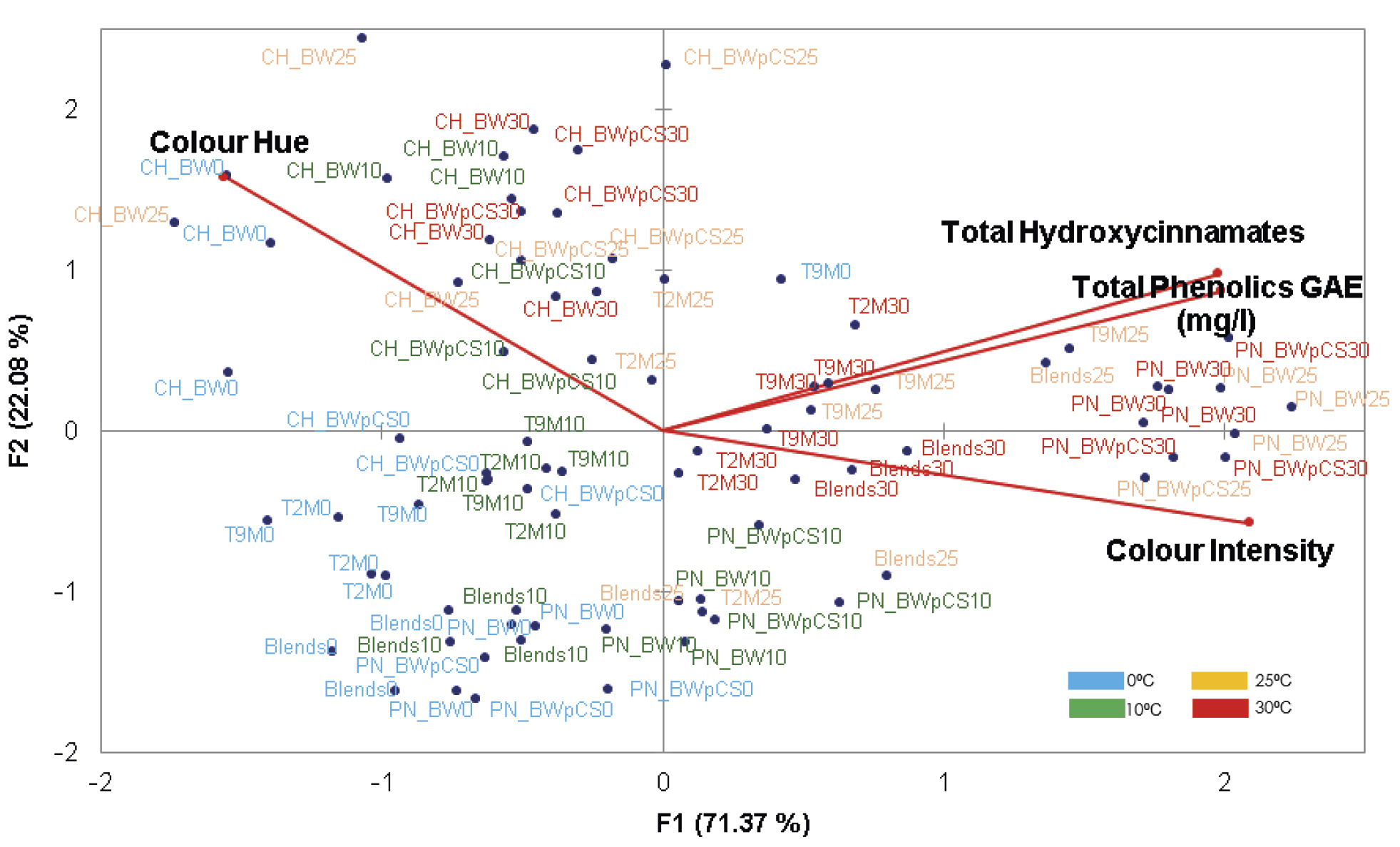 Similar to the study by Gil-Muñoz et al. (1999), there were no significant differences in the phenolics across winemaking during both vintages (Figure 2) which is different to other studies on Champagne (Stefenon et al., 2013) and alternative Spanish varieties (Martinez-Lapuente et al., 2013) which found a decrease in phenolics after the second fermentation.

Our study showed that the temperature of grapes at pressing, achieved through overnight storage, has an effect on the extraction of phenolics. The higher the temperature, the greater the extraction. The phenolic levels reported here are lower than in Champagne and are stable throughout winemaking. South African MCC winemakers may not need to chill grapes before processing, but may do so to lower-quality grapes in order to ensure a smoother processing of wines.

The phenolic composition of wine is determined by various factors including grape variety, terroir and viticultural and oenological practices. Generally, very little phenolic content is expected and desired during TSW vinification. Since phenolics are linked to reduced ageing capacity and browning in TSW, they are kept low throughout vinification. We investigated the effect of the grape temperature at pressing on the phenolic extraction in MCC wines and the evolution of the phenolics throughout winemaking. MCCs were made by the traditional method over two vintages (2014 and 2015) using Chardonnay and Pinot Noir grapes from Robertson and Darling, stored at 0, 10, 25 and 30°C before processing. MCCs made from chilled grapes (0 and 10°C) had lower total phenolics, colour intensity and total hydroxycinnamates than those made from warm grapes (25 and 30°C). This showed that there was greater phenolic extraction at higher temperatures. No changes in the total phenolics was observed from base wines to final MCCs.

The authors would like to thank Winetech, THRIP and ARC-PDP for funding. They would also like to thank winemakers/cellar masters/producers Craig Paulsen, Hannes Meyer, Pieter Ferreira, Lukas Wentzel and Charles Fox for assistance in the production of Cap Classique. Special thanks also to Dr Boredi Silas Chidi for his assistance throughout the project, as well as Prof Andrea Versari for his assistance with the proposal.