Splashing out the Cape in all its splendour! 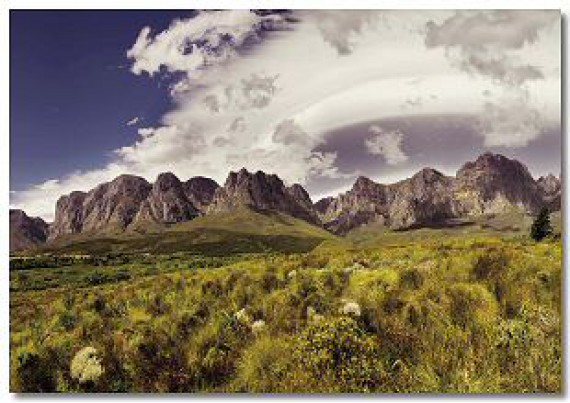 Wosa’s offices are resplendently illuminated by an array of gorgeous floral images. Giant-sized photographs of flowers indigenous to the Cape Floral Kingdom, they show vividly coloured proteas, vygies, irises and sewejaartjies that will finally festoon the Cape Town International Convention Centre for Cape Wine 2006 from April 4 to 6.

The bi-ennial showcase of the South African wine industry staged for international wine buyers and media has made diversity its theme, using flowers as an impactful way of drawing attention to the abundant biodiversity of the Cape, home to the smallest but richest of the world’s floral kingdoms. The emphasis on the indigenous floral cornucopia also supports the national Biodiversity & Wine Initiative (BWI), championed by the industry to grow wine sustainably while conserving the natural habitat.

Cape Wine 2006 will be the biggest exhibition since the inception of the event in 2000, and this year involves 350 producers, from the large-scale commercial players to the independents and garagistes, who will each seek to attract the interest and business of the visiting buyers, representing multi-national chains, specialist wine shops, dining chains and restaurants from the UK, mainland Europe, North America and the East, as well as several African countries. The more than 1 000 expected delegates will also include high-profile wine journalists from these countries.

“From a wine perspective, these images of flowers are an unusual but nevertheless powerful and readily accessible way of conveying what the Cape’s ancient soils, topography and climatic variations can produce. If the difference in flora is so huge, imagine the variety of our wines made possible by our unique terroir,” says Wosa CEO Su Birch, who has spearheaded the “Variety is in our Nature” campaign for South African wines abroad, launched at last October’s pan European Mega Tasting in London.

The positioning, which will take centre stage at Cape Wine 2006, imaginatively demonstrates the scope of wine diversity that gives the South African wine industry its competitive advantage in a fiercely contested global market. It will be highlighted at the first ever seminar on wine diversity, where speakers will include a specialist on future trends among consumers, a wine business analyst, retailers, viticulturists and authorities on biodiversity.

Wosa will also launch a highly detailed series of topographical maps of all South Africa’s wine-producing wards, districts and regions, documenting every soil type and listing every weather station erected in the winelands. Produced by cartographer Peter Slingsby, the maps, says Birch, are in all likelihood the most comprehensive of their kind to be undertaken by any single wine-producing country.

“We want to show as clearly and as widely as possible and in as many interesting ways just how rich our variety is and what makes it so,” says Birch.

The exhibition will also focus on the collective measures of the wine industry to protect and conserve the Cape’s biodiversity, with much indigenous habitat under the threat of agri-business. All participating producers have been asked to sign a document committing them to “working with nature for the benefit of all”. Their signed commitments, to be bound and displayed at Cape Wine 2006, commit to the following:

The wine diversity conference will open Cape Wine 2006 on Tuesday, April 4, followed by pre-trade tastings, when all the Chenin Blancs and red blends on the show will be exhibited according to price point. “This is not only to amplify the enormity of range but also to give lesser- known producers the opportunity to stand alongside the more established wineries. At the same time, it will help international trade to navigate potential areas of interest by price,” according to Birch.

The same evening, an exclusive “Best Of” tasting will be presented to the media. “The Pinotage Association will line up its best wines. The Chenin Blanc Association will do the same, as will the other associations representing various varietals and wine styles. And where no association exists, an independent panel will identify the best wines. These will all be presented as a way of introducing them to South African excellence in wine.”

The exhibition kicks off on Wednesday April 5, featuring a regional wine and food pairing, entitled Cape Kontrei Cuisine, where 19 chefs, many of them culinary luminaries, will each prepare a signature dish with a regional flavour, matched by a wine of the same region. These will be served from two giant marquees erected in Cape Town’s Company Gardens, where the Cape’s first vineyards were planted in the latter half of the 17th century.

Participating chefs include Franck Dangereux of La Colombe, Rueben Riffel of Ruebens, Bruce Robertson of the Showroom , Margot Janse of Le Quartier Francais, Adelaide Shibane of 96 Winery Road and Abel Joseph of Pontac. And while guests sip and nibble, they will be entertained by live African music.

Wosa will also be giving delegates a book entitled Cape Kontrei Cuisine that provides all the Cape Kontrei recipes and suggested wine pairings. “When we produced a similar book for Cape Wine 2004, the response was very positive in terms of the sophistication and originality of the foods but on distributing copies at promotional events abroad, consumers found the recipes a bit too complex to try at home. So this time our book will also include easier to prepare Cape traditional foods that are a hearty expression of Cape hospitality, with recipes by Cass Abrahams. You’ll find recipes for chicken pie, bobotie, sosaties and other typically Cape dishes, each given a localised interpretation.”

Although the majority of delegates will be coming from South Africa’s traditional wine export destinations – the UK, Europe and North America – there are also buyers and journalists attending from emergent markets such as Singapore, Malaysia, Korea, Japan, China and India. Among the UK heavyweights will be representatives from retailers Tesco, Sainsburys, Morrisons, Threshers and Majestic, and from North America, Disney, Sherry Lehmann, Sam’s Wine & Spirits, Publix, Whole Foods and liquor control boards from several US and Canadian states.

The Department of Trade & Industry (dti) is providing financial support to bring out a further 50 trade delegates from Europe, the US and Asia.

Birch says there will also be a concerted focus on the African market with the dti helping to fund the visits of 20 buyers from countries across the continent. “The dti and the Black Vintners’ Association will also be jointly hosting an Africa Lounge for one-on-one meetings between emerging producers and African delegates.”

“Our ability to attract high-calibre visitors despite the continuing global wine glut is due largely to the ever-growing international awareness of South Africa as a producer of quality and range. But delegates also find the theme of diversity appealing because of the potential it offers for regional expression in wine in the face of growing globalisation. Their consumers are seeking greater authenticity. An awareness of their provenance makes goods stand out, giving them greater significance for shoppers and diners.”

Birch is heartened by the steady increase in the number of on-trade delegates signing up for Cape Wine 2006. “We have only just begun to tap the enormous potential for growth in this market, which forms an important part of our marketing thrust this year.”

The message of biodiversity will also be amplified by individual producers, many of whom are arranging programmes for groups of delegates. “Apart from tastings atop Table Mountain and hearty braais, there will be yacht trips, quad-biking, nature trails, visits to see rock paintings and archaeological diggings, white water rafting, jazz evenings and a host of other activities all aimed to show the Cape in all its late summer glory.”

Although this year the exhibition is not open to the public, the local trade will be attending. “It is important for the local market to benefit from this industry-wide initiative as well and we are looking forward to welcoming our locals.”

Terroir in picture
To highlight the diversity of wine-growing conditions among the farms within the Cape Legends portfolio of boutique wines, soil scientist Dawid Saayman has collaborated with landscape photographer Jonathan Basckin in the creation of an exhibition entitled Terroir that will be unveiled at the Cape Legends stand at Cape Wine 2006. Basckin, who recently exhibited at the AVA Gallery in Cape Town, is represented in photographic collections world-wide, including New York, Boston, Amsterdam, Hong Kong, China and Malaysia.

The exhibition of 22 aerial shots of wine farms documents all 11 wineries in the Cape Legends portfolio. Says Carina Gous, head of the Cape Legends portfolio and who commissioned Terroir, “We have chosen to accent location, focusing on land formation, aspect, proximity to the sea, soil and other features impacting on wine style. We hope these images, some representational and others more abstract, will signal to viewers the enormous variety of wine-growing conditions evident in the portfolio.”

Saayman, a renowned soil specialist, briefed Basckin, who is also an architect, cellist and composer, by identifying notable wine-growing features of each farm before he flew out to begin photographing them.

“Jonathan brings a very fresh and very graphic eye to the already impressive natural beauty of these landscapes, drawing attention to their varied line, form and textures,” says Gous.

“Terroir remains a very elusive concept but we hope a visual focus on place will enrich the experience of our wines. When you see the rich red Tukulu soils and contrast them with the windswept, pure kaolin clay, for example, you get a far clearer idea of how location impacts on the wines we produce. Some of our farms are high-lying right up against the mountain slopes, others situated at sea level or in valleys. Some are inland, others almost at the sea. Each of these features plays a key role in contextualising the environment in which our wines grow.”

The exhibition, before being permanently housed at Cape Legends, will travel to the London International Wine Trade Fair in May.

The Cap Classique Producers Association has re-positioned its marketing objectives to highlight the importance of time in the making... END_OF_DOCUMENT_TOKEN_TO_BE_REPLACED

The South African wine industry acknowledges the greater understanding from government with the announcement of the latest excise duties... END_OF_DOCUMENT_TOKEN_TO_BE_REPLACED

The wine industry body Vinpro recently appointed Dr Langelihle (Langa) Simela to its board to provide strategic insights into... END_OF_DOCUMENT_TOKEN_TO_BE_REPLACED
Go Back
Shares