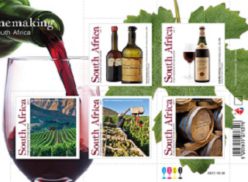 The South African Post Office is paying tribute to the South African wine industry through a set of five small international letter rate stamps and a commemorative envelope issued on 6 October 2017. The stamps were by designed by Rachel-Mari Ackermann of the SA Post Office.

The stamps cost R45,75 for a set of five and a commemorative envelope costs R48,75.  The stamps are available from all major post offices and can be ordered from SA.stamps@postoffice.co.za.

Groot Constantia is the oldest wine estate in South Africa, and appropriately, Duke of Northumberland 1791 and Grand Constance 1821 wines feature on one of the stamps. When Simon van der Stel died in 1712, the farm Constantia was divided and auctioned off. It was then owned by several owners until 1778 when it was bought by Hendrick Cloete and remained in the hands of his family up to 1885. They renamed the farm Groot Constantia and their wine became world famous.

Had it not been for Dr Abraham Perold, a scientist at the University of Stellenbosch, South Africa would not have produced Pinotage, a wine unique to South Africa. Perold’s goal was to create a wine that was as delicious as Pinot Noir but grew as well as Cinsaut and was sturdy enough to survive in the Cape. The first commercially produced Pinotage is the 1959 Lanzerac Pinotage, which is featured on the second stamp.

The winelands of the Western Cape have become a prime drawing card for tourists due to their spectacular beauty, internationally renowned restaurants and the high class wines on offer. The earliest wine route, the Stellenbosch Wine Route, was established in 1971. Today, 17 wine routes are registered with the South African Wine Routes Forum, and the winelands feature on the third stamp. Wine is also produced in KwaZulu-Natal, Northern Cape, Eastern Cape and Limpopo.

Many viticulturists prefer harvesting grapes by hand instead of machines to minimise damage. A photograph of workers collecting grapes at Babylonstoren is featured on the fourth stamp. Wine harvesting in SA normally occurs between February and March.

Wine barrels have generally been used either in the manufacturing, maturing, storing or transportation of wine. Previously most barrels were made of oak, but other material such as aluminium, stainless and plastic are becoming popular. Traditional wooden barrels are featured on the last stamp.

The Wine of Origin (WO) legislation passed in 1973, and Wines of South Africa (WOSA) established in the year 2000 identify, protect and promote South African wines. The WO seal certifies that the grapes and wine was 100% produced and bottled in that region.