State of Sommeliers in South Africa: Bridging the Gap

Thanks to independent bodies such as the South African Sommeliers Association, prospective sommeliers are provided with the tools and know-how to fulfil their role. But are their services valued? 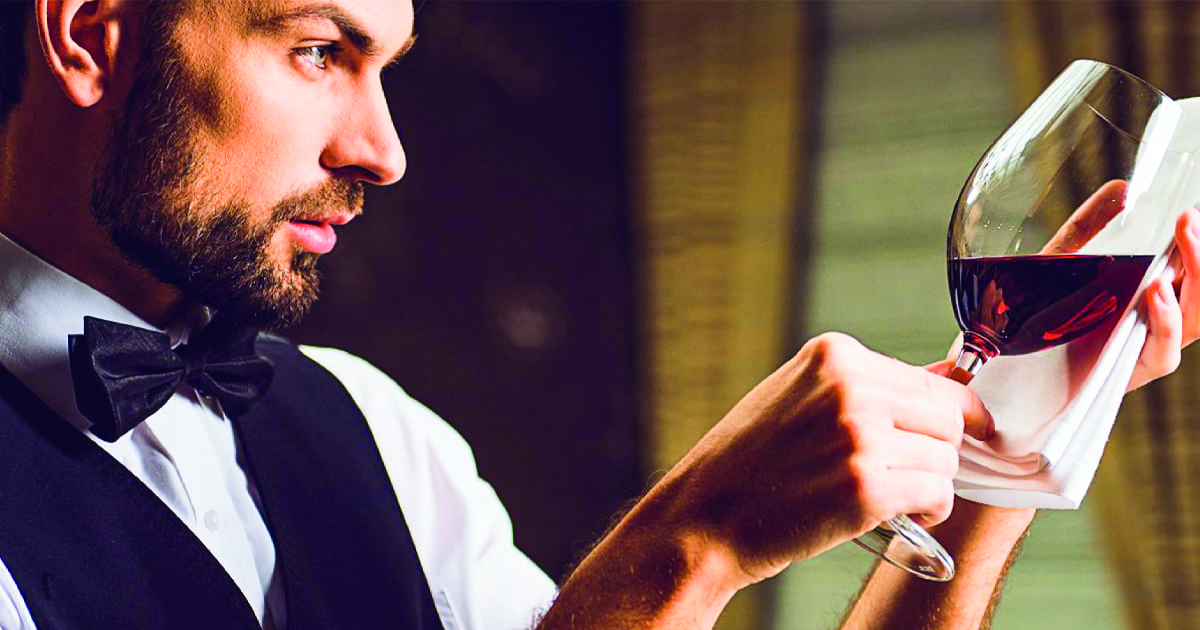 A decade ago, the term “sommelier” existed only in the vocabulary of the most wine-literate South Africans. We’d like to think much has changed since then. Not only do we have an independent, internationally recognised certification body such as the South African Sommeliers Association (Sasa), we’ve also hosted several local sommelier competitions, headlined by international brands such as Moët & Chandon, and seen the likes of Gareth Ferreira and Jo Wessels represent South Africa on the international stage.

But where does the average South African sommelier fit into the scheme of things internationally? How many establishments are willing to pay for their professional expertise, and how many can actually afford the investment? “The sommelier scene in South Africa faces persistent challenges marked by a culture of apathy and a reluctance to participate or grow,” former chairperson and Sasa founder Higgo Jacobs says.

Sasa was established in 2011 to create awareness about the sommelier profession and create a platform for sommeliers to network and learn from their peers. Thanks to the cooperation of organisations such as Wines of South Africa (Wosa) and the industry at large there are now plenty of opportunities for young, aspiring sommeliers to network with the best in the business.

“Sadly these opportunities are not fully utilised,” Higgo says. “You can plead ignorance, but I doubt that a strong argument can be made for secrecy or exclusivity within Sasa. The problem lies more with enthusiasts and non-professional members populating our educational tastings and events.”

A need for education

It wasn’t long ago when aspiring sommeliers had to travel to Europe or America to qualify. Now an internationally recognised, reasonably priced qualification is available in South Africa. The Sommelier Academy and SOMM101 offer courses to prepare for the exam. “Yet the take-up for the exam is low,” Higgo says.

To qualify as a professional member, you must have a recognised wine qualification such as a WSET certificate and three years’ wine service experience in an on-consumption environment. At least 20 of the professional Sasa members hold at least one international sommelier qualification, such as certification from the Court of Master Sommeliers (CS) or a diploma from the Association de la Sommellerie Internationale (ASI).

In an article published on winemag.co.za last year, Michael Fridjhon wrote that the relationship between the trade and those in the wine service is still severely skewed in favour of employers. “They [the employers] want skills at the table, but they still want to make the purchase decisions themselves (probably so that they can optimise listing fee revenue). The result is that very few of the now increasingly qualified group of somms are permitted to perform the kind of tasks which would justify them earning more money.”

Michael says the result is a kind of glass ceiling which leads to most of those who do have the skills moving out of service and into distribution. “Several of the Zimbabwean sommeliers who play such an important role in the Cape Town restaurant scene are treated like window-dressing for tourists rather than wine managers with a more valuable contribution to make – if only they were given the chance.”

Higgo says when we have real competition and reward for our top positions, only then will the bar be lifted. “I hope with all my heart that we don’t look back on this decade as the golden years of sommeliers in South Africa when it should be viewed as a promising start.”

Working as a sommelier is the single most important job in a restaurant, experienced American sommelier Jacob Mortenson of the International Sommelier Guild says. “About 98% of restaurants collapse within the first 24 months due to a lack of proper beverage management.”

He says a chef working on 24-30% food cost can’t compete with a proper beverage management programme, including beer, distillates and non-alcoholic drinks that typically work on a 200-500% profit margin.

A culture of excellence

The resources, talent and mentorship are available in South Africa, but Higgo is sceptical about whether South Africa has a culture of excellence that’s on par with the rest of the world. The bar has to be raised collectively to reward excellence. “The culture of excellence exists in our food and wine, but unfortunately, bar the odd exception, not in our front of house and service. The hard truth is that as long as we’re handing out samples, lunches and compliments rather than training, supporting and offering constructive criticism, we’ll never advance.”

Restaurant owners must be pressured to source only qualified personnel to lead their service teams and they must be rewarded accordingly, he says. “Competitions such as Diners Club Winelist Awards and Eat Out Mercedes-Benz Restaurant Awards should be better equipped to reward good beverage programmes, and not merely nicely presented wine lists or dinners.”

After completing her studies, Chantelle Gous (32) left South Africa to work in Canada. She completed her WSET 3 before returning to South Africa where she immediately started working with Singita Conservation Company in the Sabi Sand Game Reserve adjacent to the Kruger National Park. Here, she progressed to senior sommelier.

She says the remote location of Singita’s lodges in Africa presents several challenges, which Singita sees as opportunities by following their three core pillars of sustainability, biodiversity and to empower local communities. Due to limited ex-pat permits for example, Singita made the decision to train locals from surrounding communities to serve, understand and appreciate wine beyond merely pouring a beverage. 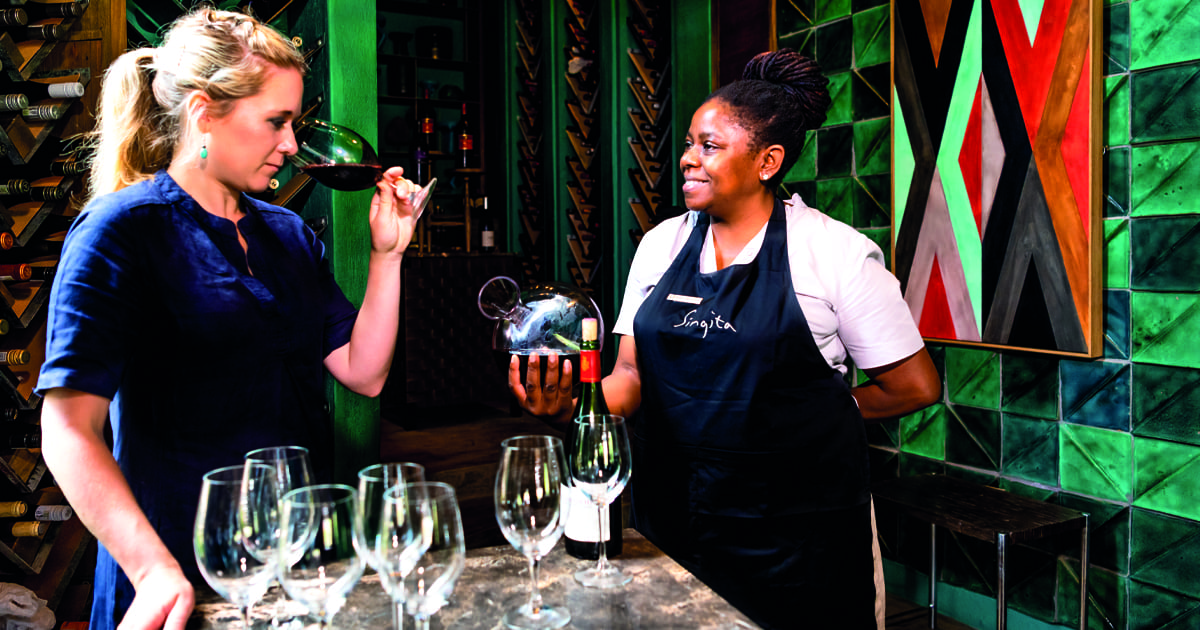 Singita wine director François Rautenbach and Chantelle are working together to further develop a training programme to grow the next generation of sommeliers in Africa. The programme provides educational support, personal mentoring, formal wine training and access to Africa’s finest wine programme. Every year, Singita selects four staff members to attend The Wine Forum at Jordan Wines in the Cape Winelands where they participate in three days of intensive wine training with renowned Cape winemakers.

Chantelle says there’s a continuous focus to promote Banakelis (the Shangaan Tsonga for butler) with an affinity for wine to wine steward with the incentive of joining the junior developmental sommelier programme. “Consistency of service, especially wine service, is very important to us. Thanks to Singita, François and a one-of-a-kind wine programme, we constantly work towards having a strong wine service culture across our 13 lodges situated in four African countries.”

She agrees with Michael that the profession has reached a glass ceiling in South Africa. “I can’t understand that in a country where we have such incredible talent and put so much focus on food, the same priority isn’t given to wine. You’ll often visit high-class restaurants in South Africa that serve world-class food, only to find the wine list and service is below par.”

“I think we must better define and interpret the role of sommeliers,” she says. “We should be careful to call ourselves sommeliers when we are no more than glorified wine pourers.”

She says qualified sommeliers are often not empowered to compile wine lists or make purchasing decisions. “They only serve wine. Because of the glass ceiling and often out of necessity, they’ve become more focused on promoting themselves and their own wine, and in the process, customers don’t receive the attentiveness and service they require.”

But how do you progress as a sommelier in South Africa? “It costs a lot of money and time to become a world class sommelier, and most South African sommeliers struggle financially to reach these peaks. Very often, sommeliers working in Michelin-star restaurants abroad receive salaries in the same line as the chef. Here, sommeliers often have to depend on gratuities.”

A proper sommelier provides instant value in a restaurant. Their service not only give customers confidence, but it also shows that the restaurant is serious about its wine and service offering.

“A well-trained sommelier allows customers the freedom to sit back and trust the sommelier’s recommendation. “François teaches us to talk with the guests, not to the guests.’ Sommeliers must act as a psychologist of sorts, able to assess a guest instantly in terms of budget, wine and food preference. It’s a skill not everyone possesses. But with the right training, experience and a sommelier’s ability to listen, it’s a skill that can be taught.”

Chantelle says the sommelier’s job is to stay abreast of everything that happens in the industry. This includes continually tasting wine and talking to winemakers, viticulturists, grape producers, distributors and importers. Wine producers must develop good relationships with sommeliers to get customer feedback. “Sommeliers play a very important role. They serve as the bridge between producers and consumers.

VOTE IN OUR #POLL: Follow/like us on social media @WineLandSA or @winelandmedia 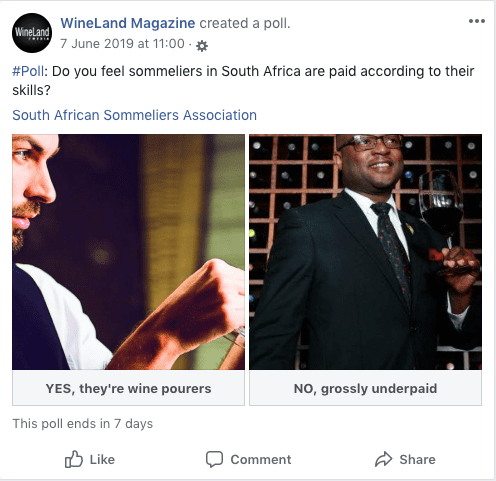