Leading Stellenbosch wine producer, Stellenbosch Vineyards, suffered a major tragedy in October 2018 when a fire broke out in the warehouse. This warehouse was built in 1992 and was consistently expanded until 1997 as the company showed significant growth. The original 5 000m2 warehouse stored just over three million bottles of wine from various wineries in the Stellenbosch wine region.

During the deconstruction and recovery process, a decision was made to recycle and donate all possible debris. The steel, a total of 68 300 kg, was donated to and partially purchased by Cape Town Film Studios and a company in the steel industry. More than 95% of recoverable timber was transported to various churches in Khayelitsha and the super structure was treated, painted and reinstated as a warehouse in Namibia.

After thorough consultation and planning, the dream of a new logistics hub became reality and 28 August 2019 marked the day the new warehouse construction began. The internal managers and innovators of the warehouse Delana Green, operations manager, and Bernard Claassen, senior winemaker, who have been part of the Stellenbosch Vineyards team for a combined four decades, had a comprehensive understanding of the requirements of the wine industry. The facilities will serve as the logistics hub for Advini South Africa, as well as providing storage and services to the Stellenbosch wine industry. 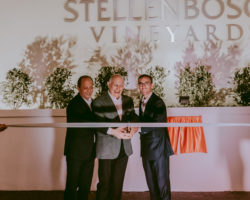 The new Logistics Hub was designed with the newest technology and a remarkable feature is the 470 000-litre water tank connected to high-tech smoke detectors and water distributors. A special touch is the sprinkler system and steelworks that are red and blue in the form of the French flag as a representation of majority shareholder, Advini.

According to the French Ambassador to South Africa, Aurélien Lechevallier, the Stellenbosch Vineyards Logistics Hub represents the determination of South Africans to succeed and the value that French investment holds for Stellenbosch and it’s wine industry. “Advini South Africa has illustrated the value of collaboration and how the ties between France and South Africa can support a company and its people to bounce back, after what was indeed a tragedy,”  explained Lechevallier.