Every bottle and every glass of wine at the Sanctuary Mandela represents economic empowerment, transformation, environmental sustainability, and premium taste. President Nelson Mandela’s palate for wines has been a topic of conversation on various occasions – his taste leaning more to sweet wines remains a surprising inspiration for the Sanctuary Mandela wine list.

The tale of when he was gifted an expensive bottle of sweet wine, which he graciously accepted from an official guest, shortly before offering the same guest a glass of inexpensive local wine – much to the guest’s surprise and dismay – reminds the Sanctuary Mandela food and beverages team that the man so many people loved was quite humble. While he appreciated the delicate craft of winemaking, he was also intentional about supporting emerging winemakers.

The Sanctuary Mandela food and beverages team continues to honour him by featuring estates and wineries on its wine list from around the country. The wineries strive to uphold the legacy of former President Nelson Mandela. Every winemaker on the list has an inspirational story that resonates with some of the ideals Madiba held dearly, such as community-building and development.

The procurement process at the Sanctuary Mandela is therefore aimed at contributing to the sustainability of the country’s wine industry, which is counted amongst the best in the world. The industry contributes R55 billion annually to South Africa’s GDP and employs at least 269 069 people throughout the value chain – with over 80 000 people working on farms and in cellars. Being the ninth biggest wine producer in the world, South Africa produces about 4% of global production. 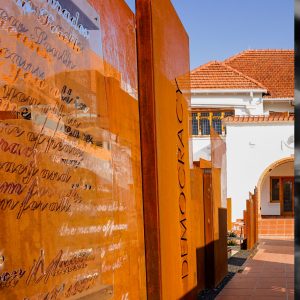 The memories of former President Nelson Mandela are preserved. Inspired by the ideals of former President Nelson Mandela, the Sanctuary Mandela procures from winemakers that, at their core, are consciously improving the lives of their communities through job creation, economic transformation, and environmental friendliness.

One such maker is Conrad Vlok who produces the Strandveld Vineyards’ First Sighting, a 100% Sauvignon Blanc. The wine is a celebration of diverse terroirs found in the Elim Valley. The Strandveld Vineyards is an 80 hectares vineyard situated at Cape Agulhas and forms part of a conservation initiative consisting of 25 private landowners and communities sustainably overseeing the protection of the precious wetlands and their indigenous populations. The initiative has to date ensured the protection of about 46 000 hectares of critically endangered habitat, guided by the need to protect the environment and economic sustainability of the local community.

Winemaker Ntsiki Biyela rose above a million obstacles to become the first, successful, awarded, black, female owner-winemaker in South Africa. A BSc. Oenology graduate from Stellenbosch University, Biyala makes the 100% Chardonnay called the Aslina Chardonnay – named after her grandmother. “I can learn anything, and I believe that I can achieve absolutely anything. This is what my grandmother taught me,” says Biyela.

As a board member of the Pinotage Youth Development Academy (PYDA), whose core mandate is to empower talented youth with historically disadvantaged backgrounds for economic opportunities in the wine sector and related industries, Biyela continues to pass down the skills she learnt to others.

The story of winemakers Mzokona Mvemve and Bruwer Raats is one of friendship and companionship, an ideal Madiba held dearly, representing the hope of a non-racial South Africa whose future embraces a dream where all those that live in it do so together in harmony and with shared prosperity. Mvemve and Raats created the Cabernet Franc-based Bordeaux that embodies a celebrated level of excellence. The winery, Mvemve Raats de Compostella, creates wines with blended varietals with a core principle around the notion of a rainbow nation.

“We don’t just buy wine. Or sell wine. Every bottle on our shelves represents an important South African story. Whether it be in our history, our present-day reality or our future, the shelves are occupied by bottles that inspire and invoke an inherent desire to walk in the footsteps of Tata,” says Kervin Richtenberg, food & beverage manager from the Sanctuary Mandela.

“We have at least nine varieties and two blends of wines on our shelves. This represents many stories, and consequently, people, families and communities directly and indirectly empowered through the different wineries. It’s through this that we continue to preserve the memory of former President Nelson Mandela and to continue the work he started, changing the lives of South Africans, especially those from previously disadvantaged backgrounds”, says Dimitri Maritz, general manager of the Sanctuary Mandela.