The birthplace of Gewürztraminer 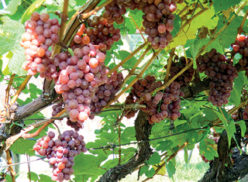 The “gewürz” in Gewürztraminer means spicy in German, but this is not at all the typical aroma of this grape, which is seen as the royal of muscat cultivars, although it is not so typical muscat as Muscadel and Hanepoot.

It covers only 8 100 hectares worldwide and the most occurs in Alsace, France. Locally only 110 hectares are planted. Although only 1 375 hectares occur in the Italian Trentino-Alto Adige wine region it is seen as the origin of Gewürztraminer and indeed in the village of Tramin. Trentino-Alto Adige (or Trentino-South Tyrol in German) is in the northeast of Italy, adjacent to Switzerland and Austria in the north. This scenic region is especially known for the beautiful peaks of the Dolomites and Alps, forests, valleys, streams and lakes. The Adige River, which is also used for the naming of the region, separates the slopes on the sides of the valley. The different altitudes of the vineyards, occurring in the valleys or on the slopes, has a vast influence on the cultivar choices of the different sites, as well as on the style of the wines produced thereof. Since 1970 the region consisting of the northern Alto Adige (South Tyrol) and southern Trentino provinces is governed autonomously, and Bolzano and Trento as the respective capitals of the two provinces rotate as the capital of the region. 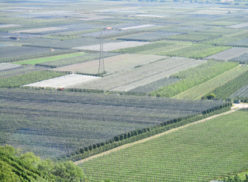 The population in the two provinces are approximately alike, but the cultures differ considerably with Italian in the south and German in the north as the dominant culture. The latter can be attributed to the former association of South Tyrol with Austria-Hungary. It is presently one of the richest and most developed areas in Europe and the European Union. South Tyrol has a continental climate and Bolzano has an average annual temperature of 12,2°C and an average annual rainfall of 717 mm. As result of the relatively cool climate, apples are also cultivated intensively. Although Alto Adige is the birthplace of Gewürztraminer, the cultivar Schiava (also known as Vernatsch) and Pinot Grigio are the grape cultivars that occur the most. Chardonnay covers approximately the same area as Gewürztraminer. The red indigenous cultivar Lagrein, which is also fairly widely planted, is older than Cabernet Sauvignon. 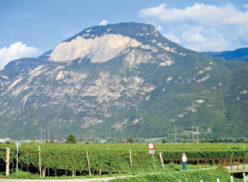