The future of natural cork as bottle closure 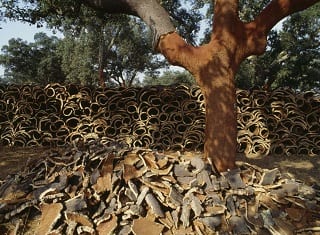 The natural characteristics of the bark of the cork oak, Quercus suber, for example its elasticity and neutrality, make it eminently suitable as raw material for bottle closures. The romantics, associated with the sound when a cork is pulled also contribute to the traditional use of cork closures. The naturalness of cork does, however, expose it to potential microbial spoilage. The mouldy character that can consequently be imparted by some cork closures to wine, has decreased its popularity as closure considerably. Many providers of a wide range of products would have disappeared as result of this occurrence, but the cork companies have managed to achieve the opposite by addressing the problem.

The president and chief executive of Corticeira Amorim, the Portuguese company that is the biggest cork company in the world, set a company aim to produce more than one billion natural cork closures, which is free of 2,4,6-trichloro-anisol (TCA) in 2020. It is well-known that TCA is responsible for the mouldy character that sometimes occurs in natural cork stoppers. It is formed as result of the interaction between phenols, chlorine and moulds that occur in the cork bark. It can, however, also occur in humid cellars, barrels, wooden panels and beams. Its sensory threshold value is 0,5 nanogram per litre. This concentration is comparable with the influence of one drop of water on 800 Olympic-size swimming pools.

Some of the large cork companies initially attempted to solve the problem through the development of agglomerate or technical corks. These consist of compressed cork granules bound by poly-urethane. The occurrence of TCA in such closures can be prevented by treating the granules with steam and water. This process can, however, not be used for punched-out natural corks, because the structure of the cork will change. Two years ago Amorim did, however, make a breakthrough with the so-called ND Tech technology. This technology made it possible to test individual stoppers for the occurrence of TCA. It comprises of the gas chromatographic (GC) analysis of individual cork stoppers. Previously such analysis lasted 14 minutes in a laboratory, but it was decreased to 14 seconds on a production line and there are plans to reduce it further to 10 seconds. The present Amorim ND Tech production consists of 10 production lines, with six machines each, working 24 hours for seven days a week to produce an expected 80 million TCA-free cork stoppers in 2018. This is still 120 million less than the 2020 production target set by them. Seeing that ND Tech production is an expensive process, it also has an influence on the price of such stoppers and it will most probably only be considered for wines selling at USD 60 or more. Further research and product development are, however, being done to make TCA-free natural cork stoppers available at more affordable prices in the future.

The elasticity of cork is another problem that can either lead to leakages or overexposure to air, which can lead to oxidation or the frustration to remove it from the bottle. The elasticity of natural corks are consequently tested with pressure equipment on the production line to remove undesirable corks.

Cork trees, which produce the bark needed for the production of natural cork closures, are steady growers and several years are required before the bark is suitable for use. The present cork plantations are also extensive and a project was launched to shorten the time before the bark can be stripped, by applying effective irrigation.

The natural cork industry is most probably in an evolutionary phase over the whole spectrum from the tree to the bottle. This industry, which was originally family-based, will have to undergo further consolidation to address the challenges of the future (Penn, 2018).