The future of pruning 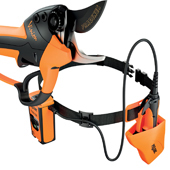 Four decades after the launch of its first mechanical pruning shears and the sale of more than 300 000 units worldwide, Pellenc has introduced its sixth-generation mechanical shears. The new Vinion offers remarkable value – precisely what South Africans require in tough economic times.

South African producers are looking for an inexpensive solution for pruning. Despite low labour costs compared to other wine producing countries, pruning remains one of the most expensive yet important viticultural practices in South Africa.

Electric pruning shears are known to be fast and powerful, but their price and size have been a hurdle. The Vinion addresses these concerns. Tested for two full pruning seasons in South Africa, it received positive feedback from the local wine industry. These shears were launched at R15 000, including the battery and a two-year warranty.

“We can confidently say that the Vinion is the least expensive quality electric shear in South Africa. Affordability is crucial in the South African market and Pellenc wanted to assure that electric pruning shears are reasonably priced and an option for most wine grape producers,” Pellenc’s Matthieu Hamel says.

To monitor quality and lower production costs the Vinion was designed and assembled at the Pellenc factory in France. The shears weigh only 670 g, making them the lightest on the market, and come with an easy pocket-fit battery that can also be clipped onto the belt. The battery is able to handle a 9 hour pruning day, even in hard and dry wood.

A fast, efficient pruning tool should also be ergonomically designed. The latest Vinion is 6 mm narrower than the previous generation and fits perfectly into small hands. While capable of pruning diameters of up to 35 mm in dry or hard wood, smart management adjusts the blade for small-diameter shoots. The optical trigger easily controls the half or full opening of the blade.

With these improvements, cutting speeds can reach 60 cuts per minute, which allows to prune three times faster than by hand. Return on investment is achieved after only 60 pruning days at that speed.

The Vinion has a full-length guard which protects the pruners’ hands. It also allows pruners to prune with one or two fingers on the trigger, depending on the size of their hand. The holster receives the tool with closed or open blade, allowing pruners to safely walk around or do other work on the vines.

INDUSTRY FEEDBACK: VINION GETS THE NOD

“I tested the Vinion for almost two months and was impressed,” says Wynand Haasbroek, agricultural works contractor at BAP Wine Works. “My team adapted quickly to the shears and they increased our pruning speed up to three times faster than by hand. The shears are compact, reaching shoots easily. They are similar in size to the manual pruning shear, but require less effort. The small battery size was able to handle one full pruning day on Cabernet Sauvignon. Pruners with small hands can also use the shears efficiently.“