The influence of different gasses on flotation

by Charl Theron | Sep 1, 2019 | Winetech Technical, Practical in the cellar 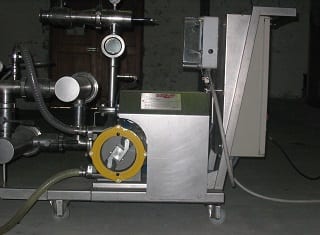 The clarification of juice prior to the alcoholic fermentation of white wines is actually a standard procedure in white wine making. It can however be executed in different ways. The different methods have different advantages and disadvantages. Flotation has however become increasingly popular amongst different cellars.

The flotation procedure was developed as a separation technique by the Australian mining industry, where it has been in use for more than a century. Contrary to the traditional settling process, where gravity is utilised to settle the solids at the bottom of tanks, the solids are coagulated and carried to the juice surface by a gas. The addition of pectolytic enzymes to the juice prior to flotation is essential to optimise the rate and yield of the process. After the enzyme addition, a fining agent must also be added to the juice to collect the solids. Combinations of bentonite, gelatine and kieselsol can be used for that purpose. After the solids are coagulated by the fining agents it must be carried to the surface of the juice, where it is removed and the clarified juice is removed at the bottom of the tank. The size of the coagulate is important. If it is too small the cohesion to the gas is too poor and when it is too big and heavy it will move to the bottom. Different gasses can be considered for flotation. As an inert gas argon has advantages, but is too expensive. Air is the most cost-effective, but can as result of its 20% oxygen content cause limited oxidation of the juice. Carbon dioxide tends to cause too big bubbles, which may create foam problems. Oxygen can cause unacceptable oxidation. Nitrogen is ideal with small bubbles, but is also relative expensive (Howell & Gamble, 2016).

Seeing that different gasses can be used during flotation, a comparative experiment was executed at the Erath wine cellar in Oregon to determine the end result if oxygen or nitrogen is used as the flotation gas. This cellar has been using flotation already since 2016 for its white wines and is especially impressed by its time and space saving. In order to obtain more detail about the process they decided to execute the comparative experiment. A press fraction of Pinot gris where pectinase and bentonite were added was divided and clarified by flotation using respectively air and nitrogen, before it was inoculated with pure culture yeast and fermented dry.

The resulting wines of the two different gasses had different phenolic profiles. The tannin concentrations of both were very similar (10,3 mg/L for nitrogen and 10,7 mg/L for air). The caftaric and caffeic acid, as well as quercitinglicoside concentrations, were however respectively ten and seven times more in the wine made by using air flotation. This was expected seeing that the air promotes the chemical oxidation of phenolic compounds. Derivatives of quercitin and caffeic acid are all more yellow coloured.

The sensory evaluation of the two final wines differed significantly. The nitrogen-made wine was more crisp and lighter in style compared to the wine made by air flotation, which was more tropical and also softer on the palate. The influence of the air on the resulting alcoholic fermentation can also have an influence on the sensory characteristics of the wine. It is consequently not obvious whether the use of air or nitrogen with flotation has specific advantages or disadvantages, but the wine style is definitely influenced. The required wine style will thus influence the winemaker’s decision regarding the gas used with flotation (Lasky, 2019).

References
Howell, G. & Gamble, C., 2016. Flotation for wine clarification and why use it. www.vinessential.com.au.
Lasky, M.S., 2019. What are the sensory and phenolic effects of using oxygen and nitrogen as flotation gases? Wine Business Monthly, April 2019: 66 – 69.