The use of whisky barrels for wine maturation

by Charl Theron | Jun 1, 2019 | Winetech Technical, Practical in the cellar 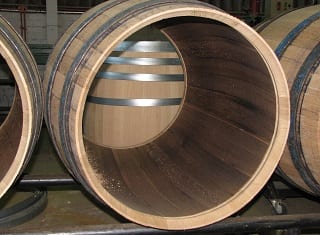 The toasting level of wine and whisky barrels differs.

Wooden barrels in different forms and sizes are used for a variety of beverages like wine, beer, brandy, Cognac and whisk(e)y. It is also used for food like pickled products and balsamic vinegar. Depending on the nature and composition of the products, the influence of the wood will differ. Many of these characteristics are not compatible with each other, but can in some cases be complementary. Used sherry barrels, for example, have for many years been used by whisk(e)y producers to lend a specific contribution to their products. The opposite is happening now, where wine cellars are using used whisk(e)y barrels for wine maturation. Although the USA and Ireland use the designation whiskey, the term whisky is used by other countries. For the aim of this article the latter designation will be used.

The staves of traditional French wine barrels are wide and have a fine grain. Their toasting lasts over a long period at a moderate temperature. In whisky barrels the staves are however thinner and have a coarse grain. The timber is also not seasoned and air or kiln dried. Its toasting can rather be described as charring, because it is done over a short period at a high temperature.

The well-known Jacob’s Creek wines of the prominent international group, Pernod Ricard, established a new trademark, “Double Barrel” on the Australian and global market. It was initiated after research by their wine and spirits divisions. It comprises the use of used whisky barrels together with traditional wine barrels for wine fermentation and maturation. The Jacob’s Creek Double Barrel Shiraz and Jacob’s Creek Double Barrel Cabernet Sauvignon were both launched in 2014. It was followed by the launch of the Double Barrel Chardonnay in 2018. The research was driven by the impact of different wood types and barrels on the profile of different cultivars.

In the case of red wines the wine is initially matured in traditional oak barrels, before the maturation is completed in used Scotch or Irish whisky barrels. During the initial maturation for 12 to 15 months, the wines are tasted regularly to monitor the desirable flavour and tannin formation. Subsequently it is matured in whisky barrels for approximately three months. In the case of white wines the process is reversed. The fermentation is halved, with the two halves respectively fermented in whisky barrels or wine barrels. After completion of the fermentation the two halves are swopped. After the experimentation it was found that Irish whisky barrels match better with Cabernet Sauvignon with a more elegant structure. Shiraz, on the contrary, matches better with Scotch whisky barrels, with a more aggressive, full body.

When whisky barrels are used for wine maturation, they have already been used for different whisky maturation cycles. At that stage they are free of whisky flavours, but do contain certain characteristics, which fit into the “Double Barrel” range. The alcohol has already moved into the pores, but as result of the coarser grain more oxygenation will occur during maturation. This accelerates the maturation process, which leads to a more intensive and softer character, without exhibiting the whisky character. The used whisky barrels can still be used for various further wine maturation cycles.

The new range has already been successful in the Australian market, but has also entered the global market by exporting it to 20 different countries. It is planned to include the Chinese market. Feedback from consumers is positive and everybody is surprised about the absence of a more prominent whisky character. The wines are rather described as being softer, well-rounded and elegant (Szentpeteri, 2018).