The world of wine 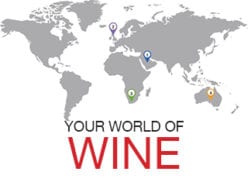 Get up to speed with your wine geography as we take a look at some of the wine regions that are making inroads on the global front.

Did you know that close to 760 000 ha wine grape vineyards were cultivated and 250 million hectolitres of wine was made globally in 2017? Although both figures declined since 2016, some areas in the world manage to surprise, either in terms of vine and production growth, or innovation and value-addition.

I bet Italy, France and Spain were synonymous with wine production in your textbooks at school or varsity. These three Old World wine countries have been around since ancient times and despite an 18% average drop in production in 2017 compared to 2016, they produce nearly half the world’s wine and reinvent themselves as they go along.

1 With a wine history dating back more than 4 000 years and a climate ideally suited to viticulture, Italy is one of the most diverse winemaking countries in the world – and also the largest in terms of wine production. “Italy, and specifically the Tuscan wine region, was one of the first destinations that used its food and wine offerings along with art, architecture and popular media to put its wines on the map and attract tourists,” Vinpro wine tourism manager Marisah Nieuwoudt says. The rising popularity of Prosecco and Franciacorta in the global market over the past five years and the rediscovery of indigenous cultivars in the southern regions signify the resilience of this traditional region, says Winnie Bowman CWM.

France, the world’s second-largest wine producer, is experiencing a renaissance as consumers increasingly can’t afford Burgundy wines and are switching to Beaujolais.

Spain has the largest area under vines in the world, but with low yields due to older vines it’s ranked as the third-largest producer of wine. “A lot is currently being done to promote their pet grape, Verdejo, from the Rueda region and the Mencia variety in Bierzo,” International Wine Education Centre (IWEC) owner Cathy Marston says.

NEW KIDS ON THE BLOCK

2 English and Welsh producers mean business. The area under vines in the UK has doubled over the past eight years and is set to grow to 3 000 ha by 2020. The industry announced it planned to plant one million vines last year alone, with new developments primarily in the south of the country, an area not traditionally known for viticulture. “They’re really coming together to grow the  industry and also developing a sparkling wine route to get visitors out of London,” Cathy says.

China has only really come onto the scene in the past decade and although only the seventh-largest in terms of wine production, it has expanded its area under vines by 80% to 870 000 ha in 2017 since 2007, and is now only second to Spain. Watch this space.

Denmark and Sweden are also expanding, although not at the same rate as the other newcomers, but take note of the inroads they’re making in cool climate viticulture as evidenced by the wines showcased at the VitiNord Scandinavia Conference in Copenhagen this month.

Wine regions all over the globe are realising the importance of integrating various lifestyle- and tourism-related activities with wine to expand their footprint. These are some of the frontrunners.

3 “The UN World Tourism Organisation recognised South Africa and the Napa Valley in America as two of the world’s foremost wine tourism destinations,” Marisah says. Although South Africa’s first wine route was established in the ’70s, wine tourism has really taken off over the past five years, contributing R6 billion to the country’s GDP. This sector is set to gain even more momentum since a Wine Tourism Strategy, driven by Vinpro, Wesgro and the SA Wine Route Forum and covering 22 wine and brandy routes, was formulated in 2016.

Although wine is made in 50 states in America, the Napa Valley region is probably the best known and welcomes more than four million visitors annually. It has a strong support base in the Napa Valley Tourism Improvement District which ensures funding for the valley’s targeted marketing, selling and promotion.

IT’S IN THE NAME

With so many brands from so many countries on the shelf, how do international wine consumers know where to start? The following countries have managed to make the choice easier by using a specific cultivar to build their brand.

4 “Ask consumers which nation makes the best Sauvignon Blanc on the planet, and most of them will say New Zealand,” Tim Atkin MW says. “Very few countries have cornered the market in a single, popular variety like the Kiwis have.” Sauvignon Blanc has been commercially produced in New Zealand since 1979 and is now the country’s most widely planted variety, constituting 72% of total production and 86% of exports.

Also making a name for itself

Chile’s Maipo Valley is called “the Bordeaux of South America” due to its close historical bond with France in the 1800s. Cabernet Sauvignon is the one cultivar that has really built the region’s brand globally. It represents 50% of the region’s area under vines, the result of a conscious effort to promote the cultivar since 1995.