Tim Atkin: “The quality of wine is a bright beacon” 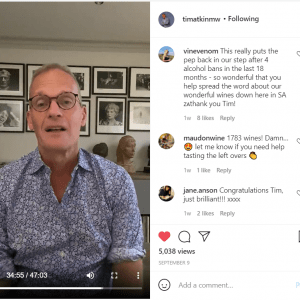 South Africa has many challenges, but quality is not one of them, says Tim Atkin MW. Lisa Lottering asked him about his 2021 special report – his ninth on the South African wine scene – and the future of SA wine.

We’ve seen a rise in quality among South African producers. What do you attribute this to?

The industry has changed since 1994 and new grapes and regions have become accessible. A generation of good wine farmers has emerged who have made an impact. Secondly, South Africa produced good vintages like 2015, 2016, and 2017. There’s a good buzz, energy, and competition. The best producers encourage one another. It’s not just me giving high scores; I think the wines genuinely deserve it.

Have we made progress in terms of our ‘wine image’ in the international market?

Yes, in my report, I mention the developing fine wine scene. Not just the 1821 Grand Constance. The United States is slowly starting to appreciate it while Europe, Scandinavia, and Holland appreciate the quality. I think there’s increasing interest in South African fine wine. In the UK market, it costs about £30 a bottle. This might seem expensive for a South African consumer but if you’re a UK wine enthusiast who forks out pounds for a Burgundy or Bordeaux equivalent to the quality in South Africa, it’s good value.

The challenge is that 55% of wines sold overseas are exported in bulk (which is nice) but I don’t think it helps build the image. It builds the image of something “cheap, cheerful, and acceptable” whereas the wines above that tend to change the image. In South Africa, there are two different markets: the bulk and the new wave/premium market. These wines have the greatest effect on the South African image and transforming it in the overseas market.

What are some of the challenges facing the greater South African wine industry?

The most immediate challenge is Covid. Secondly, the price of grapes because if farming is not profitable growers will diversify with tangerines, teas, and apples for example. South Africa faces a bigger challenge – unemployment and poverty. The wine industry has to operate within the country where these challenges are rife. South Africa has many challenges, but the quality of wine is not one of them. The quality and value for money is a rare and bright beacon in the South African landscape.

How did you conduct this year’s report?

I tasted wines remotely and with one exception. I had the opportunity to compare the best wines against each other. I am happy with the wine that scored that 100-points (Eben Sadie’s Columella) because I compared and contrasted it with the 98 and 99-point reds.

We’ve extensively discussed premiumisation, but what is still impeding our progress in this regard?

It’s a question of supply and demand. If you have too much cheap wine, it’s difficult to premiumise your image. South Africa’s 2020 and 2021 vintages post-drought will be good quality with more in the marketplace. Additionally, South Africa is partly dependent on other countries. For example, Europe was hit by frost, particularly in France, and New Zealand had a short vintage for Sauvignon Blanc which is 70% of their industry.

Which grower and winemaker of the year stood out for you?

This year, KWV’s viticulturist Marco Ventrella received the award. Marco has a great overview of climate change and South Africa’s challenges. He’s great at what he does while working at a big company. Everyone in my classification like Peter-Alan Finlayson, the Mullineuxs, Eben Sadie, Paul Jordaan, David and Nadia, the group from Kanonkop, Hartenberg, and Creation stood out for me.

Producers experiment with emerging grape varieties. Is this the trend going forward?

There’s more grapes partly because of climate change and the suitability of Grenache, Verdelho, and Tinta Berocca. These grape varieties proved their adaptability in hot climates like Spain, the South of France, and Italy. They’re niche, and getting consumers to experiment is a long process. The more consumers taste these wines, the more the local market will understand these varieties.

Yes, and the seal makes consumers aware of the heritage and vines worth preserving. Old vine grapes achieve higher prices. But it’s very small and you can’t build a whole industry on old vines. It creates interest and consumers like the idea of old vines such as Skurfberg. When you walk along those vineyards, it feels special. I have an emotional connection to old vines and consumers do too. It’s useful for marketing and there’s a growing Old Vine movement across the world and South Africa is leading the way.

Any exciting wine regions that stood out for you?

The Breedekloof region is underappreciated. The improvement the Breedekloof Makers have made in the last decade is amazing. Darling is another underrated area but the stars are the classics.