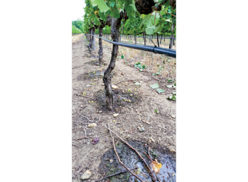 Unless we see some decent rainshowers in the coming months, the challenge for agriculture will be huge.

Agriculture in the Western Cape, in which the grape growing industry plays a significant role, will be most severely affected. Stringent water restrictions have been introduced and may become considerably more austere.

Fortunately the grapevine is intrinsically very resistant to drought and it does not require a lot of water to produce a crop of good quality wine grapes. Some of the best wines in the country are produced from dryland vines.

There is another approach, however, as well as challenges in the intensive irrigation and higher yield regions. Large canopies on bigger trellis systems increase transpiration and consequently water consumption. In these areas the following recommendations will be even more critical.

The most important question is what the producer can do to survive the drought/restricted water supply.

Also see the informative article by Lucinda Heyns on “Management of grapevines during drought periods” on the IGWS website: http://igws.co.za/article/guidelines/drought-conditions/management-of-grapevines-during-drought-periods.

A follow-up article will look at the factors to be taken into account in the long term for more effective water consumption in future.