The purpose of this article is to illustrate the potential contribution of infrared spectroscopy to the monitoring of wine fermentations.

In the wine context the term “fermentation monitoring” usually refers to the process whereby samples are removed from fermentation tanks or barrels and taken to the laboratory for chemical analyses. Concentrations of important compounds or parameters are measured and the information is subsequently interpreted to obtain an indication of the progression of the fermentation process or the quality of the end product.

In the wine industry so-called wet chemical methods are largely used to monitor the progression of fermentations. Although these practices are well-established, there is a tendency world-wide to also make use of available alternative strategies that are able to generate the same information in more cost- and time-effective ways.

Infrared spectroscopy (IRS) is widely considered to be one of the technologies which will potentially impact most on the ways in which fermentations are monitored. Reasons for this contention are the unmatched low unit cost and huge amounts of physical-chemical information in the fermenting matrix that are captured by infrared measurements. The technology is well-established in the food and pharmaceutical industries.

Results and conclusions are based on research funded by Winetech and conducted in recent years at the Institute for Wine Biotechnology, Department of Viticulture and Oenology, Stellenbosch University, in conjunction with SA wine cellars.

The conversion of grape juice to wine during fermentation may be considered a biotechnological process that is largely catalysed by the metabolic activities of microbes. The two most important fermentation processes, namely alcoholic fermentation (AF) and malolactic fermentation (MLF), are characterised by the production and consumption of metabolites by yeasts and malolactic bacteria resulting in complex, ongoing and often very rapid changes in the chemical composition of the fermenting juice or wine.

The effective management of the progression of AF and MLF requires regular chemical analyses of the most important compounds and parameters such as reductive sugars (RS), glucose, fructose, alcohol, pH, volatile acid (VA), titratable acid (TA) and malic acid. For these tests wine laboratories use established and accurate methods. Some of these methods have disadvantages, such as lengthy, time-consuming procedures and consequently a long time delay before the result is known. Furthermore the unit costs of certain analyses are high and a considerable amount of chemical waste is generated.

It is common knowledge that the progression and duration of AF and MLF are unpredictable. Apart from the juice composition, the population dynamics of the microbes (wine yeasts and bacteria) also play an important and often unpredictable role. Factors such as the initial sugar concentration of the juice, availability of nitrogen for yeast metabolism, temperature fluctuations during fermentation and specific inoculation practices may also impact on the progression.

Furthermore variation may be caused by sluggish or stuck fermentations. All these factors together result in huge variations, as well as a measure of unpredictability regarding the progression of AF and MLF. This is very clearly illustrated in Figure 1 showing the results of an experiment in which one batch of Shiraz juice is divided into equal smaller volumes, each fermented separately under the same controlled cellar conditions with a co-inoculation strategy. The yeast Saccharomyces cerevisiae NT 202 was used, together with one of four different MLF cultures of Oenocuccus oeni (S5 and Lalvin VP41) and Lactobacillus plantarum (V22 and 56).

Samples were removed from the fermentation containers on a daily basis and analysed for the malolactic concentration and the IRS. Results (Figure 1) show that the duration of degradation of malic acid took place at different tempos and durations. In certain instances the entire fermentation process was completed within 18 days, while others took more than 30 days. These are well-known phenomena, but illustrate the challenges faced by winemakers to manage cellar space if large numbers of fermentations take place simultaneously.

Quantitative monitoring implies that the concentrations of the chemical components in samples removed from the fermentation are calculated at regular intervals. As mentioned previously, this can be achieved with laboratory analyses, but modern wine industries are increasingly looking at quicker methods to follow the progression of AF and MLF, especially with a view to automatisation and improved management of fermentations. A considerable amount of development work with infrared spectroscopy has been conducted in the SA wine industry through research in collaboration with cellars and laboratories.

Infrared spectroscopy refers to the measurement of the absorbancy of infrared light by chemical components. Fermentation samples are measured in seconds and a so-called “fingerprint” of the fermentation at the exact moment of measurement is rendered as a simple line spectrum (Figure 2A). The industry uses both near (800 – 2 500 nm) and mid-infrared light (2 500 – 5 000 nm).

FIGURE 2A (Below). Mid-infrared spectra of alcoholic fermentation show how the spectra differ at the beginning (blue line) and the end (red line) of the process, especially in the area indicated with the dotted line.

FIGURE 2B. The chemical information in the spectra may be processed in a calibration model and used to indirectly predict the concentration of chemical components, in this case malic acid, rather than using a direct laboratory analysis.

The spectra contain the information about the chemical composition of the fermentation, which is loaded onto the IR spectrometer by means of a mathematical calculation in the form of a so-called “calibration model” to analyse samples. Figure 2B shows a graph of the calibration model for malic acid developed by the research.

The indirect measurements are plotted against the measured values and graphically represented to evaluate the prediction error (Figure 2B). Established statistical indicators such as RMSEP and RPD give a very good indication of the accuracy of the predicted values. During the calibration phase reference values should also be measured, but this is no longer necessary once the model has been established.

In instances where the accuracy of the quantitative values does not comply with the requirements that have been set, the information may still be used to monitor the progression of the fermentation, to the point where chemical methods are used to obtain a precise value. In this way the IRS technology may play a role in limiting the number of tests that are conducted using expensive analytical methods.

In the course of the research a wide range of accurate calibrations were developed for both AF and MLF for quality parameters such as glucose, fructose, RS, alcohol, VA, TA, pH, yeast-assimilable nitrogen (YAN), malic acid and lactic acid, which were loaded on infrared spectrometers in laboratories. The technology is not only limited to the laboratories; IR detectors can also be mounted inline and online to the fermentation tanks. The ideal strategy would be to have real time readings displayed graphically and the metabolic condition of the process determined, especially to identify problematic fermentations. This has enormous logistical benefits in view of the fact that problems may be addressed quickly through informed decisions and applicable follow-up actions. In this context one should consider infrared spectroscopy as a solution that forms part of a process, rather than a specific technology that functions in isolation.

Although the quantitative use of infrared spectroscopy rather than laboratory measurements is very handy to predict concentrations of chemical components, the calibration process may be time-consuming and expertise is required. The next section about qualitative monitoring discusses the strategy developed by the research to eliminate the calibration step and simply use the infrared spectra to determine the progression of AF or MLF fermentation.

Given the initial developmental work that has to be done with infrared spectroscopy to establish the calibrations for quantitative measurements, the research also looked at methods to eliminate this step. A very simple test, known as the conformity test, was developed. It is based on comparing the absorbancy per wavelength between spectra. The standard deviation (SD) at each data point (measurement at a specific wavelength) gives an indication of how similar or different the spectra are. Large SD values indicate that the spectra are very different, while small SD values show that the spectra are very similar. The analyst also has the option of comparing only spectra in specific areas with each other, for example the areas where malic acid is absorbed, rather than the entire spectrum.

Small SD between spectra can also be interpreted that the samples from which the spectra were taken, are chemically very similar. Figure 3 illustrates the process as applied to AF: Each marker on the graph represents an IR spectrum which was taken daily from the fermentations in the course of progression. The green reference spectra refer to samples taken at the end of AF and analysed for RS to ensure that the fermentation is completely dry. The blue markers indicate the spectra measured at different stages during the AF. 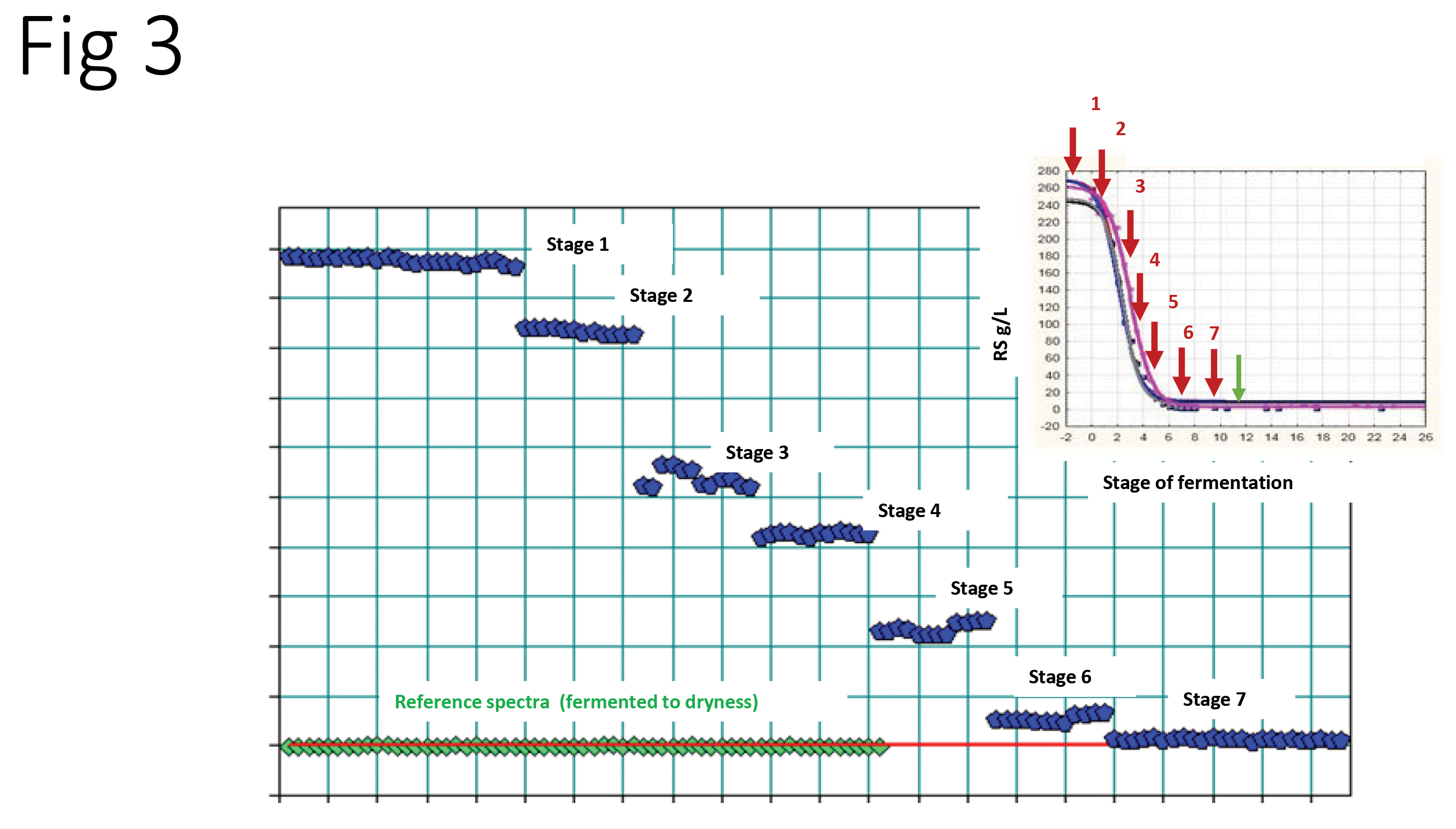 From Figure 3 it is clear that the distance between the blue markers and green reference spectra gradually becomes smaller at each subsequent stage of the fermentation progression. At stage 7 the blue markers lie on the same horizontal line as the green markers (small SD between the blue and green spectra) and it is therefore possible to deduct that the fermentation is completely dry.

To illustrate the explanation a graph was drawn in the right insert on Figure 3 showing the RS values measured in the laboratory, so that the relationship between the reduced RS concentrations and smaller SD of the two sets of spectra can be clearly seen.

With this qualitative approach it is therefore only necessary to examine the spectra and chemical analyses are quite unnecessary. The reference spectra may also represent malic acid concentration, which makes the method suitable for MLF. Several other applications of the test are currently being investigated.

The research conducted in this industry funded project laid a very valuable foundation for the monitoring of AF and MLF. Several quantitative calibration models were created by making use of infrared spectra and relevant reference values, and are currently being used not only in the research, but also in the wine laboratories of South African wine cellars. Qualitative models, using spectra only and no reference values, were also developed to eliminate the time-consuming calibration process.

Although it is clear that infrared spectroscopy can make a huge contribution to the monitoring of wine fermentations, the technology is not yet being used to its full potential in the industry. The input of wine laboratories and cellars has been considerable to optimise the technology for other users and make it as accurate as possible.

In a subsequent phase of the research the intention is to mount the IRS detectors online on fermentation tanks and expand the calibration models to measure colour components in juice and wine. This will bring the industry another step closer to complete automatisation of the monitoring of wine fermentations.