Trichoderma pruning wound protection – when after pruning is it best to apply? 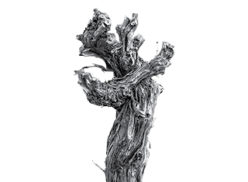 Experiments were conducted to determine the effect of early and late pruning on Trichoderma spp. wound colonisation.

Grapevine trunk diseases, namely Eutypa dieback, Petri disease and esca, Botryosphaeria and Phomopsis dieback are caused by a variety of fungal pathogens that can infect through wounds and pruning wounds. Trunk pathogens, either individually or collectively, are responsible for graft failure, loss of vigour and productivity in established vines, spots on berries, late ripening and altered flavour, as well as death of vines. In addition to this, trunk diseases also increase vineyard management costs and reduce the productive lifespan of vineyards. Due to continual loss of vines, reduced yield and production of poor quality fruit, vineyards are removed and new vineyards planted much sooner than planned. These diseases have been reported in most grapevine producing areas and the causative agents are present in most if not all vineyards.

Grapevine trunk diseases are caused by a variety of taxonomically unrelated fungi which makes it difficult to find one control method that is equally effective against all the pathogens. Vineyard sanitation is very important in reducing the inoculum and delaying establishment of trunk diseases. Pruning wounds are the major place of infection of established vines. Preventing infection by wound protection is therefore the major way of controlling trunk diseases.

Treatment of pruning wounds with biocontrol agents has been found to protect wounds from infection and is currently the only reliable way of preventing infection. Several fungicides have been shown to provide wound protection against grapevine trunk pathogens, but there are currently none registered specifically for this purpose in South Africa. Some registered paints based on bitumen products have even been shown to result in higher infection than left untreated. A major challenge to fungicide wound protection is that the wounds remain susceptible for several weeks until they are fully healed. Chemicals also lose their efficacy quickly after application and is therefore not a reliable option for long-term protection. If it rains shortly after application, the chemical will also have to be re-applied. Wound treatment agents should be able to persist until wounds are healed and be effective against all trunk pathogens.

Some naturally occurring fungi and bacteria that colonise the pruning wounds have also been shown to protect wounds from pathogen infection. Trichoderma species have shown extensive success in grapevine pruning wound protection. Biocontrol agents are an attractive choice for wound protection as they grow on and inside the wound offering protection until the wound is healed. However, the success of bioprotection is dependent on growth and establishment of the fungi on the wound and this can be affected by several factors, such as pruning time and time of application after pruning. A previous study revealed cultivar differences in the efficacy of Trichoderma spp. biocontrol agents in wound protection, but that variation could not be solely be attributed to the effects of the cultivars on the Trichoderma spp.

Despite extensive research and increased availability, there has been limited adoption of biocontrol agents in commercial agriculture, mainly due to inconsistent and unpredictable performance in the field. Reports are also available of studies that question the effectiveness of biocontrol agents in grapevine wound protection. The causes of poor field performance are usually diverse and not well understood, but are due to both biotic and abiotic factors. For grapevine pruning wounds the physiological state (dormant or active) of the vines at pruning could affect how the Trichoderma spp. colonises the wound. Delayed pruning may lead to excessive sap bleeding which may also wash away any pruning wound protectants applied immediately after pruning.

Two field experiments were conducted in consecutive years on two eight-year-old commercial vineyards (Cabernet Sauvignon and Chenin blanc) in the Stellenbosch area. Pruning was carried out on the same day in both vineyards at two separate times, an early pruning in July (recommended for Chenin blanc) and a late pruning in August (recommended for Cabernet Sauvignon). After pruning, the pruning wounds were sprayed immediately (within 15 minutes of pruning), 6, 24, 48 or 96 hours of pruning, so as to also determine the effect of the time of application of the Trichoderma spp. pruning wound agents on the wound colonisation. Two Trichoderma spp. agents were used, namely Trichoderma atroviride (UST1) and a registered product Eco77® based on Trichoderma harzianum. The success of wound colonisation by the Trichoderma spp. was measured by determining the incidence of the fungus after isolation and pathogen infection in the treated wounds.

The effect of the time of pruning on wound colonisation by Trichoderma spp.

The results of the two Trichoderma spp. were similar, so only the results of the T. atrovivide (UST1) will be reported in detail in this article. At the time of pruning it was apparent that cultivars were in different physiological states. In the early pruning (July), the Cabernet Sauvignon was still dormant with little or no sap bleeding from the wounds, while in the late pruning (August), the vines had become active and wound sap was observed. On the contrary, in Chenin blanc (an early cultivar) pruning wound sap was observed from almost all wounds at both pruning times, however, the bleeding was less in the August pruning. The colonisation of the pruning wounds by the Trichoderma spp., in the early and late pruning times differed between the two cultivars. In general, Chenin blanc pruning wounds had significantly higher incidences of Trichoderma in the late pruning (Figure 1A), while the Cabernet Sauvignon had higher colonisation following early pruning (Figure 2A).

FIGURE 1. The percentage of pruning wounds of Chenin blanc from where Trichoderma was re-isolated eight months after treatment with Trichoderma atroviride (UST1) suspensions at different times (0 – 96 hours) after pruning in Year 1 (A) and Year 2 (B).

FIGURE 2. The percentage of pruning wounds of Cabernet Sauvignon from where Trichoderma was re-isolated eight months after treatment with Trichoderma atroviride (UST1) suspensions at different times (0 – 96 hours) after pruning in Year 1 (A) and Year 2 (B).

The grapevine responds to pruning by sealing off the exposed wood, a process that involves occlusion of exposed vessels by pectin gels and tylosis, as well as suberisation and lignification. Vines in the dormant state are metabolically inactive and in this state wound-healing processes occur at a slower rate which could be the reason for better colonisation by Trichoderma spp. in the dormant Cabernet Sauvignon in the early pruning. This variation in the pruning wound colonisation by Trichoderma spp. between the Chenin blanc and the Cabernet Sauvignon confirms cultivar variation to pruning wound protection by Trichoderma spp. also found in a previous study and could result in inconsistent Trichoderma wound protection.

The effect of the time of application after pruning on wound colonisation by Trichoderma spp.

The major pathogens isolated were Phaeomoniella chlamydospora and species of Botryosphaeriaceae and Phomopsis, but due to huge variation between vineyards and season the pathogens are discussed combined as total pathogens. The Trichoderma treatments significantly reduced pathogen infection, but the wounds that received the water only (control) treatment revealed some interesting facts with important implications in the cultural control of grapevine trunk diseases. Pathogen incidence was higher in Year 2 for both pruning times and in both cultivars (Figure 3). The late pruning (August) resulted in significantly more wound infections compared to that of the early pruning (July) for both cultivars and seasons (Figure 3). This finding, that wounds made late in winter had more pathogen infections than those made earlier for both trial years, is contrary to reports from California, France, Italy and Spain where it is recommended to delay pruning as much as possible in late winter to avoid/reduce wound infection by trunk pathogens. The implication of this finding is that, pruning early in the dormant season could result in reduced wound infections as there will be less pathogen inoculum available and the wounds will heal before the pathogen inoculum becomes abundant in late winter. However, the results also shows that it is impossible to avoid pruning wound infection by timing of pruning alone as inoculum is always available, such that unprotected wounds will be infected. 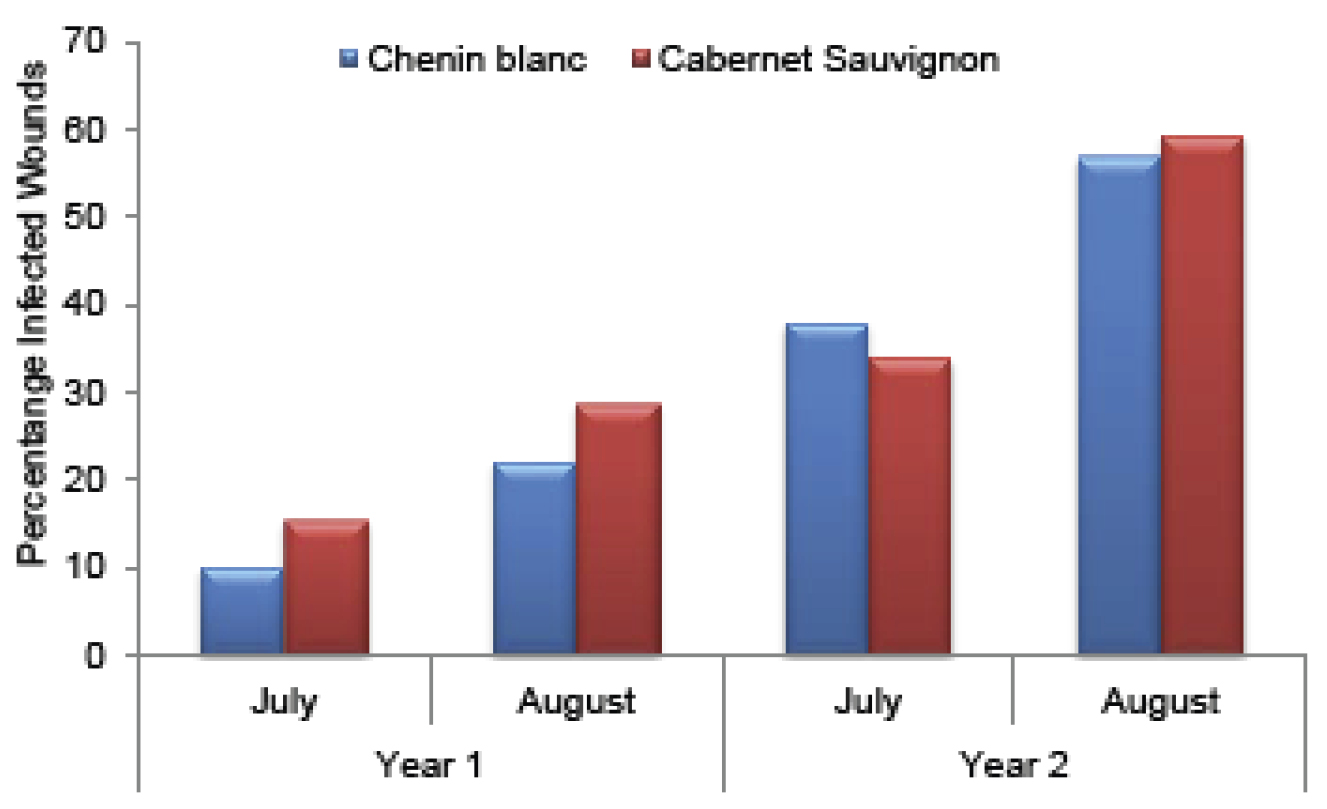 FIGURE 3. Percentage of pruning wounds infected with trunk disease pathogens of Chenin blanc and Cabernet Sauvignon that were treated with sterile water after pruning early (July) and late (August) for two seasons.

Several factors influence the time of pruning, such as cultivar, climate and availability of labour. Since inoculum is available during the entire pruning period, it is important that pruning wounds be protected. Recommendations for cultural practices for timing pruning to avoid/escape periods of high susceptibility should always be supported by local studies. As for the Stellenbosch area where this research was carried out, late pruning should not be recommended as a stand-alone action to reduce wound infections. Similar studies should be carried out in all major grapevine producing areas to come up with relevant recommendations. We have also shown that there may be variation in the colonisation of grapevine pruning wounds by Trichoderma-based biocontrol agents, but not applying them immediately, especially if sap flow is present, will result in more consistent control irrespective of pruning time or cultivar.

This article originates from research funded by Winetech and the final report of project USPP 01 2009, “Improving pruning wound protection against trunk disease pathogens”, can be downloaded from http://www.sawislibrary.co.za/dbtextimages/MostertL.pdf.