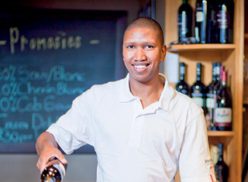 Determination and a passion for the wine industry from an early age have driven these generation-next achievers to make their mark in their respective fields. By Jana Loots

Walk into Simonsig Estate’s tasting room and you’ll be greeted by a man with a big smile – tasting room manager Denzel Swarts. Growing up on the estate as the son of a third-generation farm worker, he dreamt big.

“My upbringing in the winelands stimulated my passion for the work I now enjoy doing,” he says. He started doing odd jobs around the farm to earn pocket money and was exposed to various aspects of the farm, from working in the vineyard to eventually being appointed as junior wine advisor and logistics assistant.

A lack of funds meant he couldn’t formally study viticulture, so he became involved in community development instead. While working on two international social upliftment programmes, he completed short courses from Damelin College and the University of Stellenbosch Business School.

In 2011 Denzel returned to Simonsig as wine advisor and was promoted to tasting room manager in 2014. He’s a mentor and motivational speaker at the Pinotage Youth Development Academy and was recently appointed to the VinPro Foundation’s board of directors.

What advice would you have given yourself five years ago?

“I don’t really think back about what I would have done differently, but rather about the lessons I would apply to change the present. One thing I would say, is ‘Hang in there. Change is coming.’ Young people in the industry need to prepare themselves to be authentic leaders. Our society has many managers, but very few people who lead with integrity.”

Logan Jooste recently made headlines as the first Cape Winemakers Guild (CWG) viticulture protégé to kickstart his career with a full-time position as viticulturist at Bartinney wine estate in Stellenbosch.

Born and raised in Kylemore near Stellenbosch, Logan initially wanted to become a winemaker. “At the end of my first year of studying BSc Agriculture in viticulture and oenology, I started working as a wine advisor at Boschendal’s tasting room over weekends and holidays. What was supposed to be a holiday job lasted a year and a half,” he says, laughing.

After graduating, he wanted to specialise with a master’s degree in viticulture. “A viticulture lecturer told us the guild was launching a Viticulture Protégé Programme. At the time I didn’t want to put all my eggs in one basket and thought I could always go back to the master’s at a later stage. So I signed up and not long afterwards, I was contacted for an interview and accepted for the programme.”

Logan was the first student to be accepted for the CWG’s viticulture programme, which is co-funded by Nedbank and the VinPro Foundation. During his 30-month internship, he was mentored by guild members Louis Strydom at Ernie Els Vineyards, Charles Hopkins at De Grendel Wines and Pieter Ferreira at Graham Beck Wines.

“There are many ways to skin a cat. I have seen techniques that are very different to what we learnt at university, but still deliver optimal results. Theory is just a guideline and you’ll seldom find a textbook example in the industry.”

What legacy would you like to leave behind one day?

“I’d love to be an inspiration to new entrants to the industry so they stay passionate about what they’re doing and believe in themselves. Even though things rarely go as planned, you can always achieve success.”

Ruby Swigelaar’s inquisitive nature about the wine industry led her on an unconventional career path to her current position as market research analyst at Wesgro.

After completing a BCom at the University of Cape Town she set out to carve a career for herself in the financial services and asset management industries. After eight years of working in the UK private banking industry, Ruby returned to Cape Town but felt something was missing.

“I realised I wanted to pursue a career in the wine industry. It has always fascinated me when connoisseurs speak about wine. I wanted to understand the process of winemaking, our heritage and why people are so passionate about wine. I based myself at Jan Harmsgat farm near Swellendam as operations manager to learn more.”

In May last year she started working as a market research analyst at Wesgro, the official trade, investment and tourism promotion agency for the Western Cape. “I joined any forum I could find to stay abreast of developments in the wine industry. I wanted to combine my financial experience with my love for wine. My big break came when I received a bursary from the VinPro Foundation to complete the UCT GSB Business of Wine course. I jumped at the chance of learning formally about wine business management.”

“I’m grateful that even though I didn’t start out in this industry, I can do my bit to help it prosper. Realising the complexities and risks involved in producing wine in South Africa, I strive to look beyond the negative and do more and learn more.”

Advice for new entrants to the industry?

“There are many courses – and bursaries – available that will help boost your career. If you’re serious about doing something, put your feelers out there.”