The Tuscan hillsides of Italy 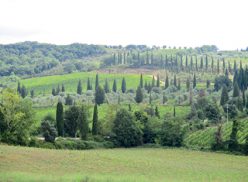 The Tuscan hillside combination of vineyards, olives and cypress trees.

Tuscany is situated on the western side of central Italy and stretches from the Tyrrhenian Sea to the low mountain range in the interior, which separates it from the neighbouring wine regions. The most important cities are Florence and Siena, but the well-known Pisa with the hanging tower is also located there. It has a Mediterranean climate with an average temperature of 9 to 14°C and chilly nights, but during January it can decrease to below freezing point. The annual rainfall is 900 to 1 400 mm. It is particularly known for the hilly landscape, which is planted with vines, grain or olives. The most vineyards are consequently at an altitude of 150 to 500 m above sea level. Apart from the hills, the combination of vineyards, olive trees, cypress trees, castles and farm houses of stone are associated with Tuscany. 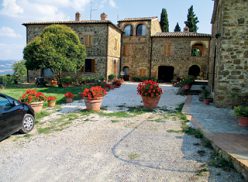 Tuscany is eminently known for its red wines with 87% of wine production as rosé or red wines. Sangiovese is the dominant cultivar and red wines dominate the wine types. Sangiovese does, however, ripen difficult and uneven and considerable clonal differences also exist. The best-known clones are Sangioveto (for Chianti), Brunello (for Brunello di Montalcino) and Prugnolo (for Vino Nobile di Montepulciano). Trebbiano and Malvasia are the most planted white grapes, but are nowadays mostly used for the sweetish Vin Santo wines. Vernaccia is a traditional white grape, which is especially used for the white wines of the village San Gimignano. Although international cultivars like Chardonnay, Sauvignon blanc, Cabernet Sauvignon and Merlot have become more popular, they are still in the minority. 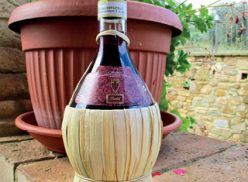 Chianti is not necessarily the best, but definitely the best-known wine of Tuscany. It is usually ruby red in colour, which can develop an orange shade with maturation. The flavours of red fruit, smoke and game are complemented by a spicy taste. It is produced in seven sub-regions with Chianti Classico traditionally the best. Chianti was traditionally associated with spaghetti and meatballs and was seen as the wine for ordinary people. It was traditionally a blend of the red Sangiovese and Canaiolo with the white Malvasia, which had to contribute to the flavour of the wine. After the Second World War the popularity of Chianti increased to such an extent that producers, to the detriment of quality, used more white wine (also Trebbiano) in blends and also planted vines, originating from poor plant material, on less suitable soils. By the 1970s the image, sales and quality of Chianti reached a low. This led to innovative actions by enterprising producers, who among other things deviated from the traditional cultivar composition and winemaking techniques by including international cultivars like Cabernet Sauvignon and Merlot, excluding white cultivars and using small French oak barrels instead of bigger barrels known as botti. These wines became known as Super Tuscans. Sassicaia is generally seen as the first brand of this type. It was quickly followed by Tignanello and other brands. As result of the cultivars and the winemaking techniques that were used, these wines do not comply with traditional Chianti regulations in spite of their quality. They consequently do not qualify for the DOC or DOCG origin classifications of Chianti. The style and quality were, however, so exceptional that they obtained international recognition at high prices. Sassicaia sells at approximately €150 per 750 mℓ bottle in Italy. Chianti Classico must according to Italian regulations contain 75 to 100% Sangiovese, not more than 10% Canaiolo, but can contain up to 15% other red cultivars like Cabernet Sauvignon or Merlot. It may not contain more than 6% white cultivars. Chianti Classico Riservas may, however, contain no white cultivars and must be matured for at least two years in wood and three months in bottle. A voluntary producers organisation, similar to South African cultivar associations, with a black rooster as logo also strive to promote the image of Chianti. 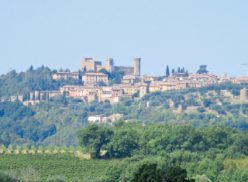 The demarcated area of Montalcino, south of Siena, produces another well-known Tuscan red, Brunello di Montalcino. Rosso di Montalcino is a cheaper red wine of lower quality, which is made in the same region. The medieval town Montalcino is surrounded by a landscape of forests, vineyards, olives and grain. The total surface of the Montalcino demarcated area with more than 200 producers is 24 000 hectares of which only 9% is used for Brunello di Montalcino. In order to qualify for the highest origin qualification (DOCG Montalcino), the demarcated area, grape clone, grape yield, wine recovery, maturation, alcohol content, acid concentration and bottling location are regulated. Only after prescribed additional maturation wines can qualify for the Riserva category. Producers often bottle single vineyard wines separately, which has a considerable influence on the eventual wine price. A well-known modern producer’s prices per bottle can for example vary from €13 for its Rosso di Montalcino to €275 for its top quality Brunello di Montalcino. Brunello is usually dark red, full bodied with a high acid and tannin concentration and requires several years of maturation to soften. The wine flavours also change with maturation from berry and cherry flavours to earthy, dried fruit, nutty, meaty and chocolate flavours. The traditional maturation in stuck vats of Slovenian oak was also tedious, but with the increased modern use of French oak barrels the wines mature faster and the wood character is also more prominent. Although traditional old cellars still exist, cellars tend to be more modern and apply modern techniques. 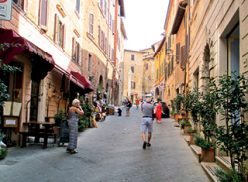 The narrow alleys of Montepulciano.