Now in its 12th year, The World’s Most Admired Wine Brands is a list of the 50 most admired wine producers from around the globe.

The list is voted for by an Academy of leading wine buyers, sommeliers, wholesalers, bar owners, Masters of Wine, writers and educators from six continents around the world.

European brands featured 26 times on the list, led by both France and Spain with nine brands each and Italy accumulating four in total.

The Highest New Entry this year was Spain’s Bodegas Protos, who entered the list for the first time at number 28, while the Highest Climber was fellow Spaniard La Rioja Alta, which gained 46 places on last year to reach number 4. 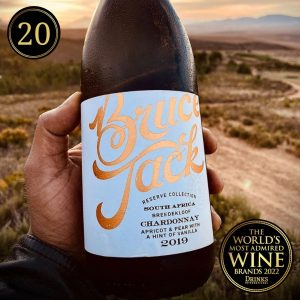 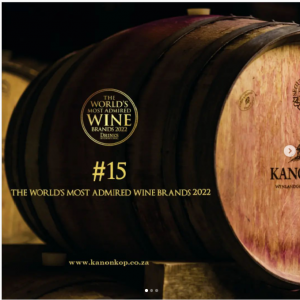 Congratulations to ⁦@brucejackwines⁩ in #20 and ⁦@KanonkopEstate in #15 for making it into the top 50 global list of ‘The 2022 World’s Most Admired Wine Brands’ by @drinksinternational. So well deserved! 🍷🇿🇦👏🏻⁦@WOSA_ZA⁩ ⁦@Vinpro_za⁩ pic.twitter.com/TGDePekxnI

Did you know: Cellar master Abrie Beeslaar celebrates his 21st harvest at Kanonkop.

Drinks International editor Shay Waterworth said: “The World’s Most Admired Wine Brands 2022 showcases the most iconic, innovative and respected producers in the world.

Earning a place on this prestigious list is a serious achievement given the thousands of brands around the world and I congratulate those in our top 50 this year. The chosen producers have earned the respect of hundreds of wine professionals and experts from around the world. Within the list are the regional champions who are leading the way in their respected wine markets to earn the respect of our Academy of voters.”

This is the 12th year in which Drinks International has compiled its definitive guide to The World’s Most Admired Wine Brands. It features a vibrant mix of Old World classics, ambitious New World producers and high-volume brands that offer exceptional value for money.

“We are delighted to reward the achievements of the most admired wine brands on the planet. Congratulations to the highest ranked wineries in Europe, North America, South America, Australasia and Africa & the Middle East, and to all of the brands featured in our definitive guide. We look forward to continuing to celebrate the successes of exceptional wine producers long into the future,” says Drinks International publisher Justin Smith.