Vergelegen at the forefront of biodiversity 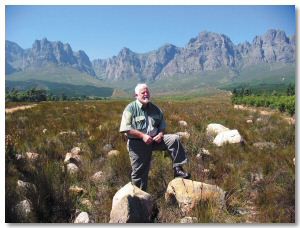 Vergelegen in Somerset West has been crowned as the first Biodiversity and Wine Initiative Champion – getting the show on the road for the wine industry’s role in conserving the Cape Floral Kingdom.

The Biodiversity and Wine Initiative (BWI) acknowledges wineries that play an exemplary role in conserving the highly threatened species of fauna and flora found in the Western Cape winelands. The project co-ordinator of the BWI, Tony Hansen, says, “Some 9 000 species are found in the Cape Floral Kingdom, a relatively narrow belt roughly running between the Cederberg and Port Elizabeth. Astoundingly, there are more plant species in the Cape Floral Kingdom than in the Boreal Kingdom which covers most of the Northern Hemisphere.

“The conservation of this unique natural environment therefore depends entirely on the co-operation between conservation bodies, landowners and industry. The BWI is a pioneering partnership between the South African wine industry and the conservation sector to minimise the loss of threatened habitat and contribute to sustainable wine production through the adoption of biodiversity guidelines by the industry,” said Hansen.

He added that that the European Union, which currently makes up the majority of South Africa’s export wine market, is working towards enforcing environmentally sustainable wine production systems on countries wishing to export wine to the EU.

“South Africa could be the big winner over countries such as Australia, as the Scheme for the Integrated Production of Wine (IPW) positions the South African wine industry as a leader in sustainable wine production.

According to prof Michael Samways from the Centre of Agricultural Biodiversity at the University of Stellenbosch, some extremely rare species immediately respond with a population increase when invasive alien trees are removed, indicating that management as it is done at Vergelegen could be immensely beneficial.

Vergelegen’s current project to return its non-arable lands to a pristine example of Cape fynbos is the second-largest conservation project in the Western Cape after the Table Mountain/Cape Peninsula project and it is the largest private project.

“It’s important to emphasise that funds for the initial conservation project, to the tune of R3,9 million, were fully generated from Vergelegen’s wine sales,” says Vergelegen MD, Don Tooth. “Becoming a Biodiversity and Wine Champion depends on the commitment of the estate or farm involved. We hope that this accolade Vergelegen has received from the BWI will encourage others in the industry to take a new look at their farms and invest in conserving the unique and special environment in their hands. We stand ready to support the efforts of our colleagues and the industry as a whole.”

According to Johan van Rooyen, chief executive of the SAWB, the contribution of international funding for BWI highlights the importance of integrating wine production and conservation practises.

“The SAWB approved the project which consists of a number of activities including the incorporation of biodiversity guidelines into the Integrated Production of Wine (IPW) programme. Another important and visible activity will be to develop a unique biodiversity wine route.

“This cannot only conserve a unique biodiversity hotspot, but also leads to the opening-up of a myriad marketing opportunities for South African wines and the region’s tourism.”

This opinion was reiterated by Wines off South-Africa CEO, Su Birch. She is very positive that biodiversity can be integrated into Brand South Africa as a unique selling point. “The Cape Floral Kingdom is the one thing that is really unique about South Africa. Our unique biodiversity is reflected in the character of our wines – it proves that we have the potential to make really exciting wines,” she says.

To become a Biodiversity & Wine Champion, the following criteria apply:

The Cap Classique Producers Association has re-positioned its marketing objectives to highlight the importance of time in the making... END_OF_DOCUMENT_TOKEN_TO_BE_REPLACED

The South African wine industry acknowledges the greater understanding from government with the announcement of the latest excise duties... END_OF_DOCUMENT_TOKEN_TO_BE_REPLACED

The wine industry body Vinpro recently appointed Dr Langelihle (Langa) Simela to its board to provide strategic insights into... END_OF_DOCUMENT_TOKEN_TO_BE_REPLACED
Go Back
Shares