As the trend to adopt a healthier lifestyle continues, millennials are increasingly turning away from wine. A marked decline in growth among the world’s largest and most exciting market is a wake-up call for global, including local, wine industries. 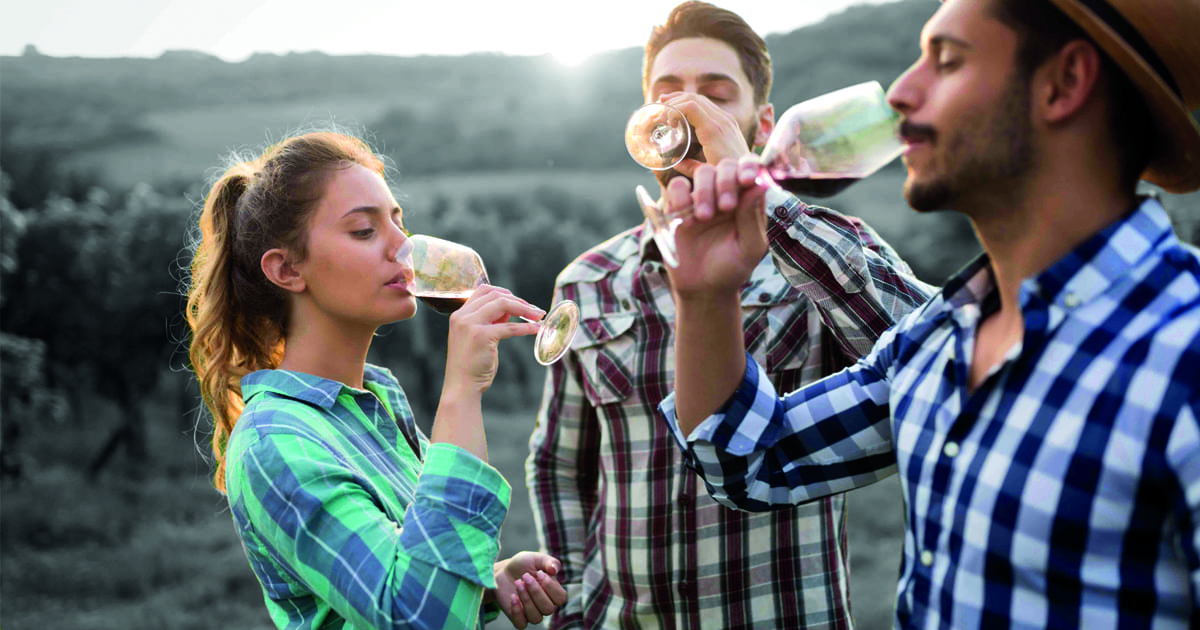 The Wine Intelligence US Landscape 2019 report, published in January, shows a marked decline in the consumption of wine and alcohol in general among people aged from 21-35, with around three million people falling out of the category last year.

Silicon Valley Bank’s 2019 State of the Wine Industry report is backed by anecdotal evidence suggesting that the wine industry is losing traction among younger drinkers, despite millennials’ willingness to experiment, trade up and embrace a wider repertoire of drinks.

In America, the overall number of regular drinkers aged under 55 has fallen from 88 million in 2015 to 84 million in 2018, and it’s estimated that currently only 35% of all adults above the legal drinking age drink wine at least once a month. This figure is likely to be much lower among the key 21-35-year-old demographic compared with the growing proportion of drinkers aged 55 and older.

Both reports suggest there are opportunities that need to be grasped as younger consumers seek differentiation and are more willing to experiment and gravitate towards innovative products and alternative wine types such as organic and lower-alcohol wines.

The reports should be seen as a wake-up call for the wine industry to cultivate its biggest and most exciting wine market, Wine Intelligence CEO Lulie Halstead told The Drinks Business. “As a category we need to realise we’re in a pitched battle for the hearts and minds of the next generation,” she says. “They’re becoming less connected with alcohol generally for a variety of health and lifestyle seasons. When they do choose alcohol, they now have diverse and interesting offers in spirits, beer and cider.”

For people cutting back, the main reason is a healthier lifestyle. These are social drinkers and most of their consumption comes when socialising with friends and family or on special occasions. According to market research company Streetbees, two in every three American millennials who drink consciously monitor their consumption by either imposing limits on their intake (27%), keeping track of units (20%) and counting the number of bottles they get through (19%).

The rise of low-to-no-alcohol wines

Reduced-alcohol winemakers could be looking at a bumper year in 2019, according to a new report by drinks market analysts IWSR. It forecasts demand increases for low-to-no-alcohol wines of almost 18% in America, 7% in the UK, 4% in Germany and 20% in Spain.

The biggest issue for wine producers and consumers alike is flavour, says IWSR CEO Mark Meek. “Anyone who has tried low-alcohol wines knows they don’t taste great,” he says. “It’s very hard to remove the alcohol and not affect the taste.” Adding to the difficulty for winemakers is that when low-alcohol wine is unavailable or tastes bad, low- and no-alcohol beer fills the gap. “Beer companies have been looking at zero- and low-alcohol products for many years, and were the first movers in all the markets we looked at. By contrast, low- and no-alcohol wines are pretty much non-existent in the on-trade.”

South African wine producers are looking at ways to capitalise on this opportunity. Van Loveren Family Vineyards in Robertson for instance launched its Almost Zero de-alcoholised, low-kilojoule range of wine at the end of last year. With less than 0,5% alcohol and 75% fewer kilojoules than a normal glass of wine, Almost Zero has been hailed as the healthier summer option.

Almost Zero is part of a larger international “healthification trend” where consumers look for other options that suit their lifestyle, Van Loveren CEO Phillip Retief says. “Almost Zero is for consumers who love their wine and will keep enjoying it, but are looking for a non-alcoholic wine option for when they’re not consuming alcohol,” he says. “No such products existed before.” While targeted primarily at health-conscious millennial wine consumers, Almost Zero is enjoyed at occasions they never anticipated, such as business launches, and is also enjoyed by non-wine consumers.

But is it a lucrative market? At the moment, it’s difficult to gauge whether the market’s viable or not, says Phillip. “We’re starting from a zero base. De-alcoholising wine is an expensive process with the spinning cone technique, additional transport costs and the loss of volume due to heat exchange and evaporation.”

One of the challenges of producing low-to-no-alcohol wines is that a lot of the flavours are stripped as part of the de-alcoholisation process. “Retaining the mouthfeel, flavours and fullness is a challenge. But if you can judge the product as a non-alcoholic wine-based drink instead of wine and enjoy it for what it is you’ll be surprised at the quality and similarity to a 12,5% alcohol wine.”

While Phillip believes there’s a market for low-to-no-alcohol wines, Van Loveren will only have a better idea of how lucrative and viable the market is by the middle of next year. Whether consumers’ thirst for low-to-no-alcohol wines is regarded as a threat or opportunity is yet to be determined. Low-to-no-alcohol wines are less of a threat and more of an opportunity as an alternative wine grape product under the control and protection of the Wine and Spirits Board of South Africa and department of agriculture, says Phillip. “New legislation will soon be passed to protect the wine industry from fake alternatives,” he says.

The good news for winemakers is that if they make the flavours work, demand is almost assured. The IWSR report described consumers as actively looking to reduce their alcohol consumption and universally supporting the notion of low-to-no-alcohol beverages when taste expectations are met.

Global consumers are becoming more health conscious, but the degree to which this is practised in their eating and drinking habits varies from country to country depending on the consumer maturity and life stage of the market, Wines of South Africa (Wosa) CEO Siobhan Thompson says. “I would say this trend is becoming more relevant in European and North American markets,” she says. “However, I don’t think it has yet become a big enough trend to largely influence the majority of normal strength alcohol wines currently consumed. What we are experiencing is that consumers are however drinking less (and better quality) wines in these markets.”

There’ll always be a place for low-to-no-alcoholic wines and this will most likely see upward growth in the coming years, she says. “But I don’t think the demand will get to a point where these wines will become the majority of wines available and consumed.” She believes that the rise of low-to-no-alcohol wines is not a threat to the industry as such. “Producers who are geared up to produce these products could add them to their current offering, in order to appeal to these consumers.” Besides more health-conscious millennials, strict government legislation for responsible alcohol consumption is also causing a shift in the general trend towards low-to-no-alcohol wines, she says.

Alcohol and its risk to society

It’s true that while the health benefits of wine – such as containing antioxidants and reducing heart disease – are well known, the socioeconomic impact of alcohol abuse on various communities in South Africa is severe.

The country has the highest prevalence of foetal alcohol spectrum disorder (FASD) in the world and more than 14 times the global average. According to research published in 2017 by the American Medical Association Journal, JAMA Paediatrics, South Africa has an incidence of 111.1 per 1 000 children suffering from FASD, followed by Croatia (53.3 per 1 000) and Ireland (47.5 per 1 000). The global average is 7.7 per 1 000.

The local wine industry employs up to 300 000 people in the Western Cape, but the large-scale damage caused to these communities by alcohol abuse simply cannot be ignored. It therefore comes as no surprise that the government is clamping down on regulations around alcohol consumption and alcohol advertising in particular. “There’s a culture of alcohol abuse in South Africa that needs to be addressed,” says Colleen Smart, spokesperson for Western Cape minister of health Dr Nomafrench Mbombo. “The government’s strategy to reduce the harm alcohol is causing in our communities is to restrict access to alcohol and increase recreational and economic activities that aren’t alcohol-related.”

Yes, alcohol abuse is harmful to your health and the Western Cape government has taken a strong stand on alcohol abuse. Protecting people is crucial. But how has the government put policies in place to protect the liquor industry, especially when it comes to banning the advertising of alcoholic products?

The National Liquor Act provides the framework within which the liquor industry is allowed to advertise, Colleen says. This framework is regulated at a national and local level. “Systematic reviews of longitudinal studies found alcohol advertising and promotion are linked to underage drinking,” she says.

It was also found that young people’s exposure to alcohol advertising raised the likelihood of experiencing alcohol-related harm in the future. “Globally, alcohol is the most abused drug and a greater proportion of harm as a result of alcohol abuse is inflicted on people other than the user compared with other drugs. I think we can all agree that protecting people is paramount.”

But whose responsibility is it to promote responsible alcohol use? It’s not the government’s job, Colleen says. “Government’s role is to provide the policy framework within which the industry can conduct its promotional activities. If the industry is permitted to promote the use of its products within the framework – as is currently the case – then the government can in turn require that responsible use is part of this promotional endeavour. This rationale is to ensure that the economic benefit is measured against the economic, social and health costs to society.”

So what’s the solution? The Italian Culture and Agriculture Commission is currently working on a bill to include wine appreciation in the school curriculum. The premise that knowledge can result in responsible alcohol consumption is an interesting one.  “We are not considering this option in the Western Cape,” Colleen says.