Water and energy saving in the wine industry

by Sandile | Nov 1, 2016 | Winetech Technical, Practical in the cellar

Power shedding in South Africa has forced various cellars to buy or rent generators to continue with their normal activities. Although the capital expenditure related to this is considerable, the running costs amount to several million rand for an industry, which is already continuously exposed to increasing input costs. The drought in various wine regions has also set back the size and quality of the 2016 vintage, which once again emphasised the importance of sustainable natural sources in the wine industry.

The west coast of the USA has experienced serious drought over various years. A survey was done in the Californian wine region to evaluate which actions were or could be implemented to address the drought problems. The local industry can learn quite a lot from this survey.

The actions of cellars to limit water consumption, vary from steam sterilisation, which is used instead of warm water for washing purposes, the installation of flow meters and low flow water pipe valves or the training of personnel in the saving of resources. The latter is the action that is mostly implemented by cellars in order to save water and energy. Small cellars have implemented the most innovative actions like the recirculation and treatment of cellar waste water, which is afterwards used for irrigation or the catchment of rain water, which meets the total water demand of the cellar.

Approximately 60% of the cellars do not monitor their energy use, which implies that they also do not monitor their energy expenditure. This is however unwise, bearing in mind the increase in energy tariffs, which is a considerable cellar expenditure. In spite of this trend, various cellars act very innovative regarding their energy savings. It includes amongst others the isolation of walls and roofs and the installation of low energy lighting. Cellars with more substantial financial resources also install movement monitors, which switch lights on or off automatically.

Although the mentioned Californian survey does not include the use of solar panels, it is installed by various cellars. It can include roof panels or the roofs of parking areas (Lasky, 2016).

The sunlight reaching the earth continuously, contains enough potential energy to meet the total global energy demand. It is also an inexhaustible energy source, often noise free and can also supply energy to distant areas. Presently solar energy does however supply less than 0.1% of that demand, but the present global reserves can only supply energy for the next 30 to 40 years. Over the past 15 years the use of solar energy has consequently increased annually by 20% and Japan, USA and Germany are the most important markets. Solar energy can be used in different ways to generate electricity. It can for example separate electrons from atoms in sun cells to generate an electric current or solar panels can be used to convert water into steam, which can be used to drive steam turbines for electricity generation. In spite of all the advantages, solar power has also a few disadvantages. Solar panels and cells are relatively expensive and during darkness or cloudy conditions they do not function. In such cases energy, stored in batteries, must be used. These batteries are also expensive, bulky and heavy and must be replaced over time. 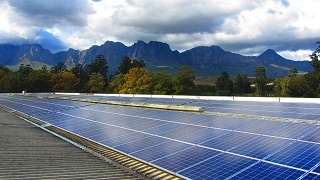