Where the tough got going 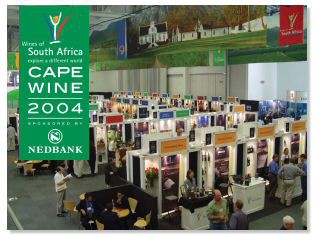 The going is certainly going to get tough ahead, but an event like Wosa’s third round of its biennial Cape Wine promotion, will help a long way for the tough to get going in the ever more challenging world wine export arena.

The strong rand and unfavourable exchange rates, international wine surpluses and increased competition are great stumbling blocks ahead, but the South African effort is gaining momentum, coherence and professionalism. This is the overwhelming message from the four day event which involved more than 1 200 foreign media, trade and other representatives and virtually all the country’s role players in export.

“If you take South African wine seriously, you had to be there, irrespective of whether you realised new deals or sales,” said Neil Ellis afterwards in an interview. This sentiment was echoed by other leading exhibitors when approached for comment by WineLand.

Perhaps the outspoken and often controversial Michael Fridjhon summed it up best when saying, “The general feeling is that this has been a world class show, well managed and successful in delivering the right audience to the industry.

At this stage of South Africa’s development as a wine producer in the global context, we need to bring trade buyers and opinion formers to the country to expose them to the wines here, where they are made, he added.”

More than one sigh of relief was probably uttered when Fridjhon, as convener of a seminar panel, did not expose the visitors to touchy ‘household’ matters like the additives issue, when the spotlight fell on “South Africa, the next five years”.

In his seminar, a particularly diplomatic Fridjhon urged local producers to focus on expressing the origin of their wines, selling a taste of place. He also stressed that South Africa was not doomed to follow the Australian model, where big brand uniformity was beginning to limit growth.

With reference to Cape Wine 2004, he added that “at this stage of South Africa’s development as a wine producer in the global context, the country needs to bring trade buyers and opinion formers to expose them to the wines here where they are made”.

Meanwhile, even the weather played along as Cape Wine 2004, South Africa’s biggest ever wine trade exhibition, covered 5 000 square metres and showcased 4 000 wines from 268 exhibitors to about 2 500 visitors with a specialist interest in wine – comprising 1 200 visitors from overseas, with 150 foreign and 100 local media.

Said Wosa CEO Su Birch: “Cape Wine 2004 provided an outstanding opportunity to show international trade and media the scope and depth of our industry. And right here in the Cape. It’s important to remember we are not only selling wine on the international market but also its provenance. For international wine buyers and journalists to experience the Cape firsthand gives far greater substance to their exposure,” said Birch.

She felt, though, that the four day format was a bit too long and three days, with at least one exclusive day for the trade, would be more ideal. That would also eliminate the problem of poorer attendance of the last day’s seminars.

Delegates were also treated by individual producers to boat trips, beach parties, helicopter rides to wineries and sumptuous dinners in many of the Cape winelands’ historic manor houses.

Birch says many of the major wineries reported doing “serious business”. The biggest contingent of foreign buyers came from the UK, numbering 130 – to be expected, since Britain is the biggest export destination for the country’s wines.

“But we had significant numbers from other major markets like the US, Germany and The Netherlands, which in each case amounted to close on 100 delegates. And also large groups from countries like Canada and Sweden.”

Foreign visitors came not only from well-established export wine markets, but also from emergent markets like India, Singapore, Korea, Hungary, the Ukraine, the Czech Republic and even countries like Cyprus and Angola – 20 countries were represented in all. The last two days of the show, which ended on April 2, were open to the South African trade and public – the first time they have been included in the exhibition, which was targeted principally at the export market. This drew more than 1 000 visitors. In addition to the exhibition, held at the Cape Town Convention Centre, Wosa also hosted an evening of local food and wine at The Castle of Good Hope. Entitled “Celebrating Cape Cuisine” and featuring 20 of the region’s top chefs, it drew the majority of delegates.

Delegates attended a charity wine auction that raised over R40 000 in aid of Dopstop and the Makukhanye Gospel Choir of Nkquebela in Robertson.

Selling a ‘taste of place’

Producers should focus on expressing the origin of their wines – selling “a taste of place”. This was the appeal from Michael Fridjhon, Johannesburg-based industry commentator.

As introduction to the seminar on the next five years in the South African wine industry, Fridjhon said, “Wineries are discovering that the Rand is much stronger than a couple of years ago and that it’s hard to make a living with current exchange rates. In the past, we did our marketing on the basis of devaluation of the currency”.

“The ever smiling price of the rand made it easy to put stock on shelves at a discount, but that’s not marketing at all. It’s simply discounting wine off the shelf.

“Now that the rand has stabilised – and stabilised at a position of strength for some time – the wine industry has to accept that the currency is not going to do its marketing for it and that we have to produce wines that can compete, and that at a higher price points in order to be profitable for the producer.

“We have to take the concept of discount out of product and then make sure as an industry we over-deliver in terms of the expectations of consumers. This obviously also requires communication and is very much a part of the message of brand South Africa.

” … with those things we can certainly also take advantage of many of the other benefits that are part of what is to be South African. We have, as you can see, the great price, and we have ample supplies of labour, which means that we can do things like organic and handcrafted wines more cost-efficiently than most other countries.

“We certainly have dedication, commitment and an extraordinary enthusiasm for the future. These are really key elements in the way that the South African industry should present itself going forward.”

Fridjhon stressed the importance of authenticity in wine marketing and ensuring the consumers understand what they’re getting at what price.

” If you’re going to talk about the authenticity of the trade, you need to have an industry which has the structure to police this properly and also to give consumer confidence worldwide.”

“South Africa was at the crossroads of the brand authenticity debate -one of the challenges facing the Cape wine industry is the road forward”, he said.

Great opportunity, but it’s what you make of it …

Interviews with various participants revealed an overall spirit of satisfaction with the great networking opportunity and the professional arrangements. But clearly, you had to do homework to make the most of it. KIM MAXWELL filed this feedback.

Pinotage – ‘The future lies in definition and difference’

Introducing a seminar on Pinotage and Cape Blends, the Pinotage Association set out to prove that great Pinotage can age. Beyers Truter challenged tasters to defy the Lanzerac ’64 and Simonsig ’78 as great examples of aged wines.

Tasted against the vibrancy of L’Avenir 2000 and CWB Kanonkop 2001, they certainly reflected a piece of Pinotage history, but the audience wasn’t uniformly positive about the older wine quality. Catharine Lowe, editor of Wine International, UK, questioned whether slightly younger wines – say from the 80s – wouldn’t have been more relevant.

The association could do a lot better following Anthony Hamilton Russell’s lead, which is to concentrate on making the best wine possible, which then just happens to be Pinotage. “Having a unique selling point (USP) isn’t enough reason to sell Pinotage. The wines have to be really good,” he urged.

“If we just treat Pinotage like a red wine, we’d probably have more marketing success. The variety itself is capable of greatness in a different way to an Australian Shiraz or Californian Cab.”

True to his philosophy, a sneak preview of the Bastenburg 2001 wowed tasters – a single vineyard 100% Pinotage wine, it will form the basis of Southern Right’s future Cape Blend flagship.

Michelle Rolland also made a stand for Pinotage in the “Wines of the Warm South” seminar. Rolland’s collaboration with Remhoogte Estate produced a Merlot-dominated blend, Bonne Nouvelle 2002, with 25% Pinotage and 17% Cabernet Sauvignon. It received a mixed response, with Frank Prial of New York Times noting he’d like less Pinotage. But Rolland believes South Africa’s future lies in defining a difference.

SA Shiraz got a universally favourable review in the ‘warm south’ seminar, with tasters noting the diverse wine styles of examples such as Vergelegen Syrah, Thelema Syrah or The Foundry. In fact, SA Shiraz/Syrah seemed to shine in most seminars featuring reds, and was the variety that attracted most favourable comments from international buyers and media.

Defining SA style accurately – as opposed to Australia and Rh“ne – preoccupied some trade members though. The response: that SA Shiraz/Syrah is usually a style in transition, fitting somewhere in between.

Tim Atkin MW, columnist for The Observer and Off Licence News, introduced a ‘Shiraz and Syrah – the future for South Africa’ seminar. “There was a question mark at the end of this title originally, but I’ve removed it,” Atkin began.

Using input from Cathy Marshall of BWC and Marc Kent of Boekenhoutskloof, Atkin said South African wines appear to be divided into Australian-style Shiraz, and more serious, classic flagship styles following a French mould, titled Syrah. He described common winemaking variations employed in these countries. Kent noted positive Syrah-style developments in SA, such as less use of American oak, more French oak, and less new oak. “Personally I try to use oak as a vehicle for slow oxidation, not to add an extra element to a wine,” he said.

Charter and scorecard in pipeline

The first active steps to the drafting of a South African Wine Industry Charter and Scorecard have been taken after representatives from all sectors of the wine industry recently approved the industry’s transformation plan, its commitment to Black Economic Empowerment (BEE) and the need for this Charter.

Speaking at the “Future” seminar, Dr Johan van Rooyen, chief executive of the South African Wine and Brandy Company (SAWB), said the Charter will have a major impact on all in the wine industry and could, if introduced correctly, play a profound role in increasing its competitiveness. The nuts and bolts of the Charter’s content still have to be thrashed out, but ensuring that all stakeholders in the wine industry have a voice in the process and that the process itself is transparent, are non-negotiable and will ensure a positive response.

“The purpose of the Wine Industry Charter and Scorecard is to align and focus all sectors of the wine industry into coherent strategic activities, to create synergies within the industry and to provide a measurement of progress,” he said.

Comexposium (global event organiser) and Vinexpo Holdings (held by the Bordeaux-Gironde Chamber of Commerce and Industry – CCIBG) have... END_OF_DOCUMENT_TOKEN_TO_BE_REPLACED

Every year, the presentation of the prestigious 1659 medal of honour (erepenning) to a wine icon is a special... END_OF_DOCUMENT_TOKEN_TO_BE_REPLACED
Go Back
Shares