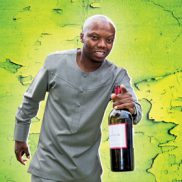 The release of their maiden 2014 vintage of Touch Warwick Cabernet Sauvignon later this year is bound to have significant, wider industry relevance, because Touch – as his fans and friends call him – has managed to do something that the wine industry is failing at: capturing the imagination of black South Africans.

The Metro FM DJ and businessman is regarded as one of the most influential contemporary commentators in South Africa. Millions of young South Africans listen to his Metro FM show about “all things captivating and newsworthy”, Touchdown, as they head home from work on weekdays.

“Connecting with people is what I do. Isn’t that also what wine is all about? To me it just seems like a natural fit,” he suggests. “Touch Warwick is not just a wine: it’s a story about two families – the Molefe’s and Ratcliffes. We want to showcase the potential of taking hands – the opportunity of collaboration in post-apartheid South Africa.”

A MATTER OF NATIONAL PRIDE

As a kid from Sharpeville, Touch was introduced to agriculture, soil and seasonality as he helped his granny pick up corn in the fields. Decades later he is getting his hands dirty again – this time by being physically involved in the making the Touch Warwick Stellenbosch Cabernet Sauvignon.

The son of a reverent, Touch is a religious man and through Holy Communion, wine has always been more than just a drink. “Really getting involved in making wine with Mike has been incredibly special – particularly because it entails bringing families together to create something that is truly unique. That in itself is a symbolic of communion – particularly in a South African context.”

A strong American accent is evidence of Touch’s stint in States, where he obtained a degree in marketing and cut his teeth in radio and the entertainment industry. “Ironically, it was also in the States where I really experienced patriotism and pride. Making wine awakens that kind of patriotism in me. Wine flies the South African flag. It’s a custodian of our nation – more so than diamonds or gold. And the beauty is that it can’t run out!” explains Touch.

Another trait that he picked up in the States is confidence – which he certainly shares with his partner, Mike. “There is tremendous value in South African wine and particularly in Stellenbosch – more so than I think even the wine industry realises. We need to confidently celebrate and build on the fact that South Africa has a history of producing world-class wines.”

It seems fitting that the Touch Warwick wine is as bold as its big-thinking proprietors: a Stellenbosch Cabernet Sauvignon that was made to make a big impression. “Obviously it had to be a Cabernet! Not only because it has to have a wow-factor, but also because it needs to improve with time – much like this partnership,” confirms Touch.

TAKING WINE TO THE PEOPLE

Although domestic wine consumption has recently showed signs of life after years of stagnation, South Africa still has one of the lowest per capita wine consumption of wine producing countries around the globe. Despite successes in the global market, South African winemakers are still battling to sell wine to their own people. Noting that he has always been in “the business of people”, Touch is keen to play a role in bridging the gap to promote wine among black South Africans. When asked why whisky consumption among young South Africans has skyrocketed while wine has seemingly been left behind, Touch’s marketing training comes to the fore. “Whisky had a successful push strategy, while the wine industry seems to have a pull mentality. Wine needs to go out and resonate with people and I can play a significant role in achieving this”.

Touch’s long term vision includes establishing an academy that trains sommeliers in the townships. “They’ll eventually tell the wine stories and guide a wider audience from wineignorance to enlightenment,” he suggests.

Through Touch Warwick, the wine industry has gained a new, remarkably valuable voice. This not only holds significant potential in promoting wine to black South Africans, but could turn the tide in terms of the fate of black owned brands. Indeed, wine just got a lot more hip hop!

The first bottle of Touch Warwick was sold for a remarkable R1.3 million at the Cape Wine Auction. Proceeds from the sale will go to charitable causes in the Western Cape.