by Charl Theron | Apr 1, 2019 | Winetech Technical, Practical in the cellar 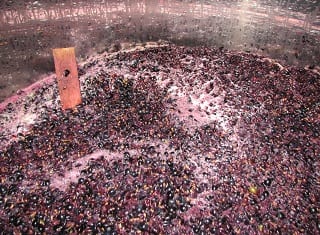 Alcoholic fermentation is the backbone of winemaking. It therefore follows that all processes, physical factors and components of the process will have an influence on the result of the fermentation. Whether stems are absent or not during fermentation is one of these influences.

Although it is generally referred to as a stem, it consists of the pedicel, with the berries attached to it, the central axis or rachis to which the pedicels are attached and the peduncle where the bunch is cut from the shoot. Together these parts of the stem are 2 – 5% of the bunch mass. The appearance of the stem changes during ripening from green to brown due to lignification, which also has an influence on the chemical composition of the stem. As result of this change, the stage of picking the grapes will have a great influence if it is decided to ferment undestemmed grapes.

Historically wine was made from whole bunches by pressing the bunches in case of white wine making prior to fermentation or fermenting it as whole bunches in case of red wine making. Before the development of destemmers, the only way to destem the grapes was the manual removal of the berries. It is however an expensive, time-consuming process, which is only applied by a few cellars. As result of the use and development of destemmers, the destemming of grapes has actually become a standard cellar practice. Recently the whole-bunch fermentation of red grapes has however become more popular again. It must however be differentiated between carbonic maceration and whole-bunch fermentation.

In case of carbonic maceration whole bunches are kept under a carbon dioxide atmosphere for approximately one week, without the presence of any juice, before it is destemmed, crushed and fermented under normal conditions. During the carbonic maceration, enzymatic reactions occur in the berries, which result in the formation of unique aroma compounds like benzaldehyde (cherry or almonds), vinyl benzene (styrene or plastic) and ethylcinnamate (cinnamon, strawberries or honey).

Whole-bunch fermentation is applied by transferring whole bunches without destemming in the fermentor, whereafter no or a certain percentage of destemmed and/or crushed grapes are put on top of the whole bunches. Contrary to carbonic maceration, it is not kept under a carbon dioxide atmosphere. During the development of the alcoholic fermentation, the whole bunches can be crushed partially or completely by punching. Whole-bunch fermentation is mostly associated with the French Burgundy region, where amongst others well-known estates like Romanée-Conti, Leroy, Dujac and Ponsot applied it with their Pinot noir. Cellars in Northern-Rhône also use it for their Shiraz. The technique is globally mostly applied with Pinot noir and Shiraz and the percentage destemmed grapes can vary from 0 – 20%. Pinot noir is often produced without any destemmed and crushed grapes, while the percentage in the case of Shiraz varies from 15 – 20%. Pinot noir is usually lighter in colour with less tannins and whole-bunch fermentation can improve it. It is usually not used for Cabernet Sauvignon and related cultivars, because the high methoxypyrazine concentration in its stems can impart an undesirable grassy or herbaceous character to the wine.

The most important sensory differences between whole-bunch fermentation and conventional wines made from destemmed grapes are phenolic profile and aroma differences. During the period when the berries remain attached to the pedicels, it is possible that enzymatic reactions, similar to those of carbonic maceration, will occur. Such wines can consequently exhibit fruity or spicy aromas. The retention of stems can also result in higher concentrations of aroma and tannins, lower fixed acid concentrations and a higher pH. It is however important that these changes are balanced, otherwise it can lead to excessive astringency and the so-called green character.

Although more interest in the application of whole-bunch fermentation occurs globally, it must be applied with the necessary care, because it can also be detrimental to wine quality. Certain aforementioned cultivars, do not benefit from it and the condition of the stems is also critical. It must be sound and not green. If green stems are used, it can lead to undesirable grassy, spicy and mouldy flavours and excessive astringency.