The Innovation Summit, held at the Cape Town Stadium last month, provided the perfect platform for Winetech to host a panel discussion on the impact of climate change on the South African wine industry, and how technology and research can help producers mitigate its effect. By Anton Pretorius This panel of experts, moderated by winemaker and Winetech head of knowledge transfer Lucinda Heyns, dissected the topic of climate change and the technology available to help producers deal with it.

Vitagora Cluster is a food innovation cluster in the world-famous Burgundy-Franche-Comté and Paris regions.  Driven by consumers who are increasingly concerned about the impact of food on their wellbeing, it has built a network of 550 businesses and industry professionals all working together to produce sustainable food.

Burgundy recently experienced extreme climatic changes which impacted the quality and quantity of crop production, Christophe says. “Not only has the region seen an increased prevalence of diseases, but also severe hail, frost and drought conditions, which have caused volumes to be irregular.”

The research clearly shows climate change affects each and every wine region of South Africa differently, Lucinda says. Conrad agrees, saying the various effects of climate change per wine region is because it’s dispersed over a wide geographical area.

Dr Tara Southey, a postdoctoral researcher at the Centre for Geographical Analysis in Cape Town, focuses on better understanding the unique climate dynamics in the Western Cape in the context of agricultural production. She’s involved in building an integrated climate, GIS (Geographic Information System) remote-sensing and a grapevine database to provide producers with decision-making tools to formulate adaptation and mitigation strategies in the context of climate change and market shifts.

“In the context of climate change, factors such as seasonal variability and limitation of available water resources, have increased pressure on the production of wine grapes and could continue to do so without effective adaptive strategies,” she says. Minimum temperatures during the winter months are getting cooler or colder, which opens up the vineyards to issues such as frost.

During a recent frost alert, it was encouraging to see producers in the Robertson wine region react quickly to the warning by irrigating vineyards to warm the soil levels and installing cover crops to lessen the effect, Conrad says. “Unfortunately, we had some frost. But the damage was minimal due to the mitigating strategies that producers applied.” 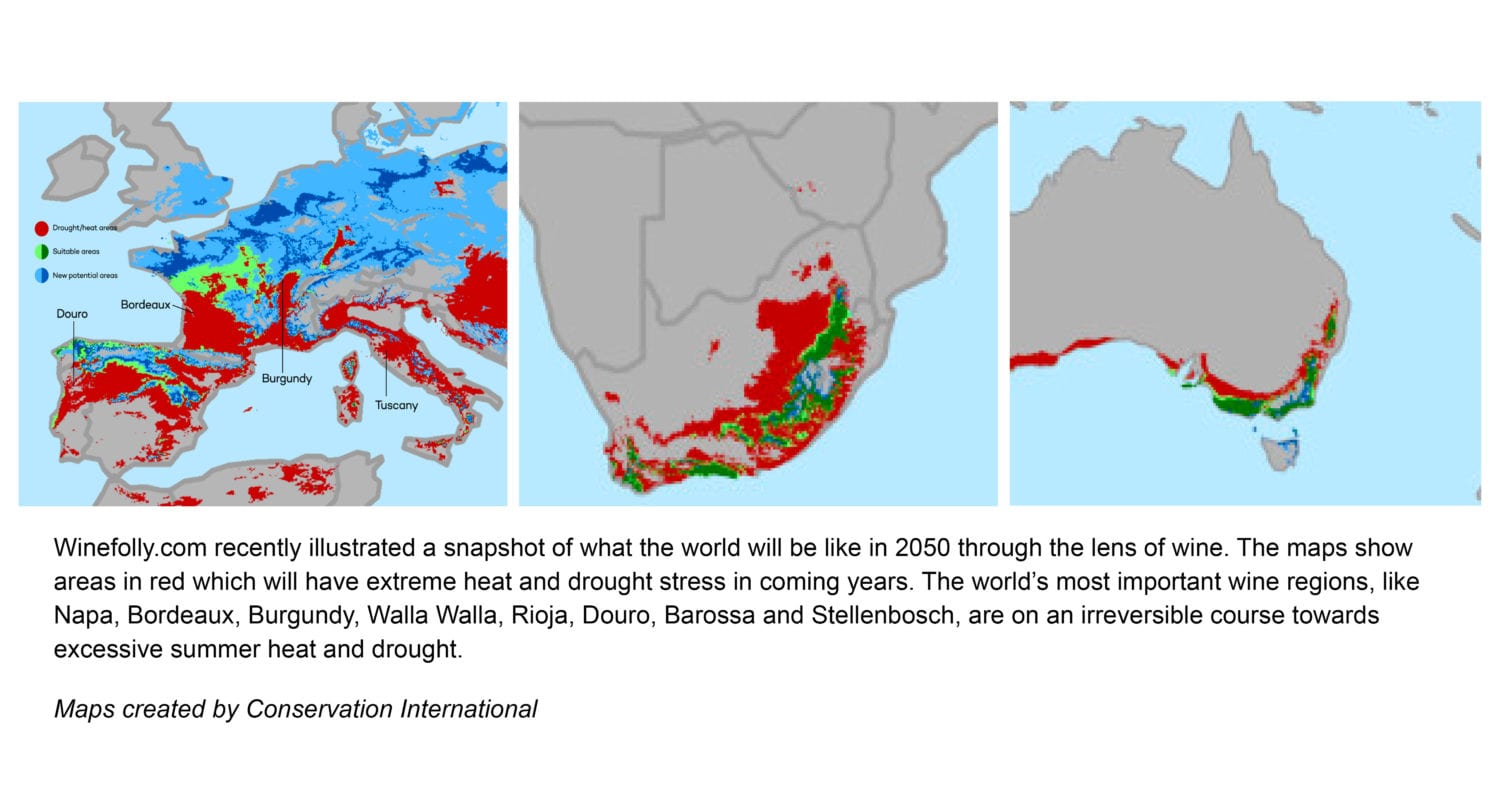 Tara’s research also indicates a shift in the rainfall patterns of the Stellenbosch wine region during the winter months. “Our typical rainfall period is June, July and August, but we’re seeing most of the rainfall occurring at the end of the winter period,” Conrad says. “This increased rainfall makes it difficult for producers to prune their vineyards. Producers are not supposed to prune on rainy days due to pathogens and trunk diseases. They also prefer to prune as close as possible to the budding period to stimulate fruitfulness in the vines.”

One mitigating effect that Conrad is seeing among producers is the increased use of battery-operated backpack pruners. “Your average farmworker can prune anything from 350-400 vines a day with a hand pruner. But the battery-operated pruner allows them to prune up to 1 000 vines a day, which makes it more efficient in the context of climate change.

“We also have to protect our pruning wounds. During rainy days we see a lot of diseases spreading to pruning wounds. Winetech has done some excellent research on an active ingredient or pathogen called Trichoderma, which we actually apply to the pruning wounds and that outcompetes any other negative pathogens. It’s something that’s not widely used internationally. It’s a unique technology from South Africa that we can apply to other industries as well.”

The Olifants River wine region was also severely affected by the drought. “The key takeaway there was just really good planning,” Conrad says. “We drew up a water budget according to which producers had to ration irrigation for certain vineyards.” Many producers in the Olifants River region use pressure chamber technology imported from America and commonly known as the “pressure bomb”. It allows you to monitor the stress level in the vine. Deficit irrigation is purposely withholding irrigation and stressing the vine in order to induce favourable physiological changes.

Albert, who’s the coordinator of the Agro-Innovation Hub in Stellenbosch, highlighted what’s at the forefront of agro-tech in South Africa. “We’ve identified 26 technologies across the agricultural, food and manufacturing sectors in South Africa,” he says.

“But these new technologies can be very isolated. For instance research-grade weather stations can cost from R80 000-R150 000, making them prohibitively expensive.” But many projects don’t always require research-grade stations. “We can go down to low-cost stations with the integration of many ICT solutions on the market.”

The problem in South Africa is that we don’t know what’s coming because we don’t have a good weather station network. “It’s expensive, and the state doesn’t maintain stations as they should, which has led to diminishing data. Without data, you can’t act. We need to build a strong, long-term database on climate change to build climate resilience.”

Climate change is an important topic for Winetech, which coordinates research for the entire SA wine industry, he says. “There are producers who are vulnerable and don’t have big R&D budgets or sometimes R&D is not their first priority. Our aim is to equip those producers with the latest knowledge so they can be competitive and make rapid, responsive decisions when it comes to climate change.”

“With this tool, we put decision-making back in the hands of the producer,” Gerard says. “It helps them understand how the climate is changing and how the interaction between soil and climate will impact their plantings. With climate changing and water becoming a limited resource, we don’t have the luxury to waste time and money when it comes to planting vineyards optimally to ensure wine quality and style.”

There’s recently been an increased focus on plant-based methods, Albert says. Irrigation scheduling decisions are based either on the direct measurement of the soil water status or on physiological measurements such as plant water status. Soil-based measurements are quick and easy to automate, but the plant response for a particular quantity of soil moisture varies as a complex function of evaporative demand.

“A plant-based approach measures the plant stress response directly, but is an integration of environmental effects as well. Unlike soil-based methods, plant-based measurements can indicate when to irrigate, but not the quantity.”

Even before the Western Cape started feeling the effects of the drought, Vinpro implemented a project to look into wine production that’s both sustainable and profitable. The Gen-Z Vineyard Project looks at how new cultivars respond to local conditions. It’s main objective is to empower producers, viticulturists and winemakers with the latest information and technology to make better long- and short-term decisions so they can become more profitable, Conrad says. “There are still very few early adopters among grape and wine producers in South Africa. But with climate change producers need to adopt new technologies much more quickly than usual. Also, be creative or you’ll be in trouble.”

There’s clearly plenty of technology available and a huge body of research to help producers mitigate the effects of climate change. “We have enough tools in our toolbox to help producers measure better and faster,” Lucinda says. “We can help them understand climate change better and be more proactive when making more informed decisions. We must continue to refine these tools and make sure they’re implemented.”