Woolworths take on canned wine: beyond the trend

As the first South African retailer to sell premium boxed wines, Woolworths has set the pace in packaging innovation. Their new line-up of canned wines proves it’s still ahead of the curve. And it’s not only consumers who benefit.

The canned wine trend has followed hot on the heels of premium boxed wines here in South Africa, showing that producers and retailers are increasingly confident in the evolving perceptions and behaviour of traditionally conservative consumers.

Other factors have also played a role. Cans are attractive from a sustainability perspective, since aluminium is relatively simple to recycle compared to mixed material packaging.

Canned wine is attractive from a sustainability perspective.

But while Woolworths is committed to sustainable packaging, it wasn’t the driving force behind the decision to expand their offering to canned wines, says Woolworths’ senior wine buyer, Rob Gower. “One consideration was high portability and fewer breakages,” he says.

“Another was portion control. If you open a bottle of wine, you don’t necessarily want to let it stand over to the next day. A can gives you 250 ml – roughly a glass and a half – which allows people to control their intake.”

Wine in cans have been in available in South Africa since 2019, but Woolworths wanted to be sure the technology was up to scratch before launching their own line. Much of the filling in South Africa used ambient techniques, for instance, and there were concerns about the possibility of reduction and odd flavours developing.

Woolworths ran extensive trials and decided on a pressure-filling machine that provides more control over the process. “We partnered with Stellar Organics, which already had a market for canned wine in the US and had invested in a canning line. Since they also have an organic range, we could centralise the filling rather than rely on a mobile line.”

Woolworths’ canned wine range currently consists of three organic certified wines: a Sauvignon Blanc, a Merlot and a rosé – in packs of four R79,99. Getting the rosé style just right was tricky, because at this price point rosé can present a naturally metallic taste, which people may perceive to come from the can.

One of the advantages of canned wines is the ability to pressurize the contents, which means they’re able to match the bottled product. It also overcomes one of the limitations of boxed wine – the inability to add CO2 – which lends more freshness to white wines.

It’s been a steep learning curve, Rob says, but the results have exceeded his expectations. “The wines actually taste better in the can than in the bottle – at least on the short term. There’s definitely a freshness in the canned wine.” 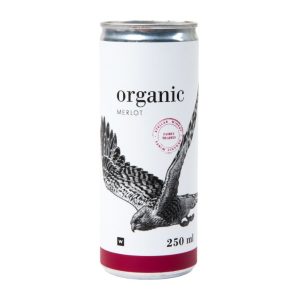 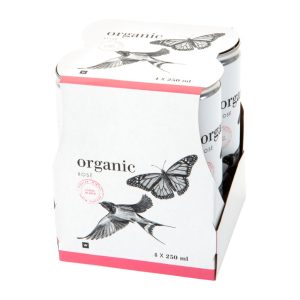 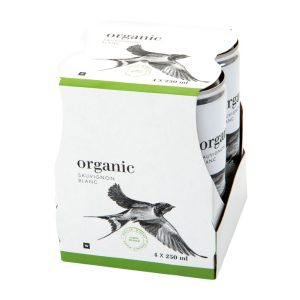 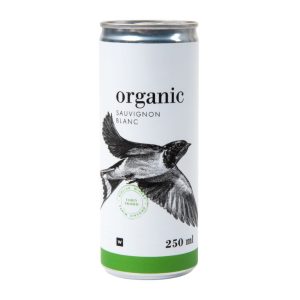 It’s still early, but the canned range seem to be selling well and interest is growing. “The premium boxed wine taught us mid-week drinking is still important for people. They want a glass of wine on a Tuesday evening without having to open a whole bottle, and cans offer an accessible format for regular drinking wines.”

Woolworths is gaining a reputation for experimenting with new formats, and consumers are willing to trust them on ventures like this. “We intentionally launched at a very accessible price, which is risky since canning is more expensive than bottling, but we want to get people to try them,” Rob says. “We want to keep learning more about the packaging, for instance how they age.”

Whether this market segment will continue growing and even develop into more premium offerings is anybody’s guess, but nobody will know until someone takes the first step. While the boxed wine market seems to have settled on a particular level and usage, consumers are still learning how and where canned wines fit into their lifestyle.

A consumer comments on canned wine

Rob’s excited about improvements that are coming over the next few years. “Tiny Keg has just launched a new production facility with a fixed line, which will make a world of difference to the quality of wines that will go into cans,” he says. “They’re also learning about what works in terms of filling, pressure and different wine profiles.”

It’s still not clear what the proper etiquette is for drinking wine out of a can – do you use a straw, drink it from the can, or pour it into a glass? Rob believes cans have an important part to play in promoting responsible use. “It’s part of a broader conversation that’s happening in the industry,” he says.

“Wine is in the fortunate position that it’s not seen as a party drink; it has a little bit more sophistication than other drinks, and as an industry we have to protect that. It puts us in a better position when it comes to government policy and legislation if it’s not seen to attract the same binge culture as other alcohols. We’re working on some education programmes on moderation and portion control, and cans play a part in that.”