World Bulk Wine Exhibition ’19: The world of wine is ‘bulking up’

The world of wine is “bulking up” as more and more wine is being sold and/or shipped in bulk to be bottled at its destination. This significantly reduces that wine’s carbon footprint and creates considerable savings on the final cost of the wine. Shipping in bulk allows for 24,000 litres of wine to be shipped in a 20’ container, as opposed to 10,584 litres of bottled wine in a 20’ container along with around 5.5 tonnes of glass. Some of Australia’s biggest commercial brands are shipped to Europe in bulk and then bottled over there, for distribution throughout Europe.

The best place to see “Bulking Up” in action is in Amsterdam at the start of December each year, when the World Bulk Wine Exhibition (WBWE) is held there. 2019 was its eleventh year and it was definitely bigger, brighter and better than ever before. 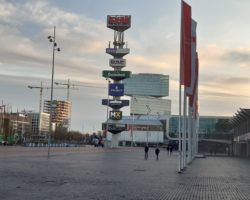 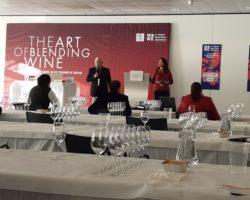 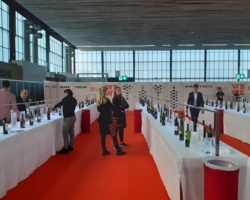 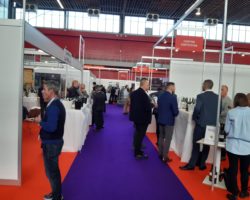 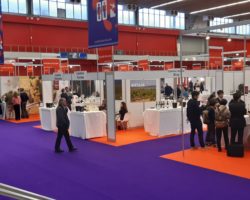 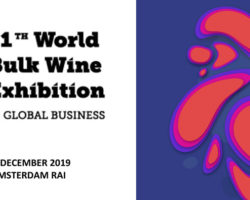 Unfortunately in Australia the word “bulk” is synonymous with “cheap and nasty”, whereas in the rest of the wine world, it simply means wine that is sold by its producer in bulk rather than in bottle. This is especially so in Europe where they have  hundreds of wine co-operatives who receive grapes from thousands of small grower/owners, turn it into wine and then sell it en masse to supermarket chains to use for their own brands, or they export it to buyers in other countries.

These European co-operatives were established a very long time ago, so that small acreage grape growers could get their wine made. Over time as the volumes grew they began to sell the resultant wine in bulk to interested parties. A typical co-operative can have anywhere from two/three hundred members/owners up to well over a thousand for the really big ones. Until the turn of the century most of these co-operatives made wines that were of “lowest common denominator” in quality, as they accepted all of the grapes from all of their members with no significant rules or standards. However, in more recent times, in order to survive, they have increasingly had input into the viticultural practices of their members. They have introduced quality standards and wine grading systems so that they have significantly raised the quality of the wines they produce and sell.

As a result of this, today there is a significant quantity of premium and super-premium wine available for sale on the bulk wine market. Yes there is still a sea of bland ordinary bulk wine for sale as well, but those are not the sort of wines which come to be showcased at WBWE.

In November/December each year, the WBWE is held in Amsterdam. The 2019 exhibition was the eleventh and largest event held so far, with 450 producers exhibiting their wines from 24 countries and it was attended by over 6,000 wine industry buyers/executives hailing from 60 different nations. It is the only event that brings together buyers and sellers of around about 80% of the world’s bulk wine trade.

As part of the WBWE, each year they conduct the annual International Bulk Wine Competition (IBWC), which is open to any wine from around the world that has a volume of over 10,000 litres produced in order to be sold in bulk. The IBWC is judged by an international panel of twenty-five judges from eighteen countries. We judges were divided up into five panels of five, each with a chairman. The scoring is done using iPads rather than paper scoring sheets, which is a brilliant system so long as none of the iPads crash. Each judge enters their score on their iPad and the chairman then accepts the results or asks the judges to review them if there is a wide variation in the scores. There were plenty of Silver, Gold & a few Grand Gold (Equivalent to a Trophy) medals handed out. The results were announced just before the official opening of the exhibition on the Monday morning. Out of just under 250 entries into the competition, the judges awarded 4 Grand Gold Medals, 43 Gold Medals and a number of Silver Medals.

The Grand Gold medals awarded were:

Dee Vine Estate- Chardonnay 2019 – (Australia) – this is the second year in a row that an Australian winery has won the only Double Gold for Chardonnay.

Apart from the wine competition, and the bulk wine trading, the WBWE also conducts a number of excellent seminars and workshops over the two days of the event, covering topic such as climate change, the environment and potential business opportunities, all of which are crucial to the survival and growth of the bulk wine trade.

Some of the seminars included in the 11th WBWE were:

To me, one of the greatest features of the WBWE is that they have what is called, “The Silent Room”. This is a vast open area where wines are lined up by variety/blend on long trestle tables for you to taste in peace and quiet, without the presence of any salesmen or marketers. You can taste almost all of the wines that are at the Exhibition and compare the same variety not only from different producers, but also from all the different nations participating.

Wading past a sea of Sauvignon Blanc, Pinot Grigio, Chardonnay, Cabernet Sauvignon, Merlot from around the world, in the Silent Room, one encounters some really interesting wines, such as for example – there were 5 samples of Ancellota (native Italian red) which were all bright purple, had lovely herbal aromas, with ubber tasty palates and a tight grippy finish- very good and appealing wines.

The varieties which really stood out in this line-up were mainly the emerging varieties, as there were a smaller number of samples and they seemed to have had more TLC put into them.

In the whites the stand out was Verdejo from Rueda in Spain, with all four samples being excellent wines. Likewise with the very rare Gross Manseng from France, which had a great crunchy green apple flavour. The various Chenin Blanc from South Africa were darn good, as were the couple of Pecorino from Italy.

In the reds there was a far greater number of interesting wines on show. These included – some lovely juicy/jubbly Grenache from Languedoc, delightful Granacha Tintorera from Spain, interesting Feteasca Nera from Macedonia & Moldova, the rare Bobal from Spain and many of the wines in the plethora of Argentine Malbec. There was certainly no dearth of quality wines with which one could design/create a blend to suit any taste/palate anywhere around the world.

The big focus this year was on the East of Europe with Moldova having a massive stand, North Macedonia also had a large stand, with Romania, Czech Republic, Georgia, Slovakia and Bulgaria also having stands.

Most of their wines were made from the usual “classic or mainstream” varieties like Chardonnay, Cabernet Sauvignon, Merlot and Shiraz. They were good commercial wines but nothing to get too excited about, that is, “same old same old” and would need to be sold more on price than sheer quality. However at both the Macedonian & Moldova stands I tasted some excellent wines made from the region’s native varieties- in the whites- Feteasca Alba and Feteasca Ragala whilst in the reds it was Feteasca Negra, Vranec and Kadarka. There is also a growing trend of blending native varieties with “classical” varieties in order to create a point of difference, so far it seems to be working.

All the Aussies had very good quality wines, with the standouts for me being, in no particular order:

For the first time I saw a New Zealand stand, where Giesen wines were tasting a Sauvignon Blanc & Pinot Noir.

The WBWE is an awesome event that is attended by the majority of the wine industry’s leading bulk wine sellers, shippers and buyers from around the globe. It has become so successful that as the world’s bulk wine focus goes shifting from Europe to Asia (especially to China), WBWE in May 30-31, 2019 conducted its first Asian Exhibition (WBWEA) in the city of Yantai in China, see my article in WBM July/August Edition “A New Dawn Rising”. It was the first ever bulk wine exhibition to be held in Asia and it was almost as spectacular as what the sensational WBWE in Amsterdam is each year.

So if you have quality wine to sell in bulk or are looking for quality bulk wine there is no better way or place to “Bulk up” than at WBWE either in Amsterdam in late November 2020 or WBWEA Yantai on the 29th & 30th of May 2020. Cheers.

Stop Press: Just announced that Kingsland Drinks in the UK has formed a partnership with Soul Tree Wines in India and will be importing bulk wine from India to be bottled in the UK and sold through Indian restaurants. The initial offer will be of one white wine & one red wine, with a view to expand the range over time.

The world is certainly “Bulking Up”

DAN TRAUCKI is an Australian freelance wine journalist and a wine industry consultant. Dan can be contacted at dan@wineassist.com.au. This article first appeared in Wine Business Magazine Australia.